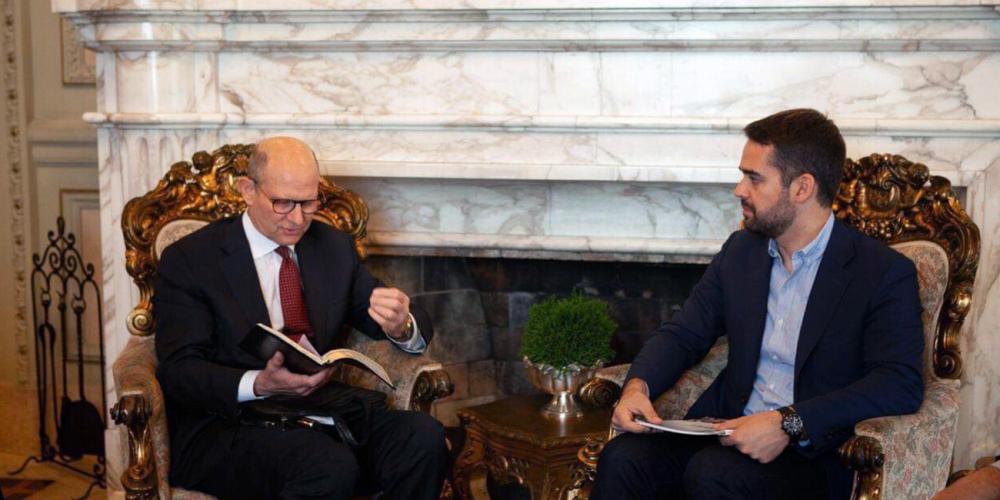 Ted N.C. Wilson, president of the Seventh-day Adventist world church, invited the governor of Brazil’s southern state of Rio Grande do Sul to seek wisdom from God in handling a regional economic crisis, and the governor thanked the Adventist Church for improving people’s lives in his state.

The gubernatorial meeting came as Wilson made a two-day visit to southern Brazil, where he also observed the South Brazil Union Conference’s “Each One Saving One” program in action with stops at three urban centers of influence, three schools, three conference and mission offices, and two churches.

Governor Eduardo Leite ushered Wilson into his ornate marbled office in the state’s capital, Porto Alegre, and smiled wryly when Wilson remarked about the elegance of his Greco-Roman-style headquarters.

Leite, 34, said the massive building was constructed years before his state sank into billions of dollars of debt to the federal government.

“With the fiscal crisis, we have less power to help the population, so we need your help as the church to help the people,” said Leite, who was elected governor in 2018.

He expressed gratitude for the work that the church does for communities through the Adventist Development and Relief Agency and other programs.

With the governor’s consent, Wilson opened his Bible to Nahum 1:7, which provides a solution to all crises and reads, “The Lord is good, a stronghold in the day of trouble; and He knows those who trust in Him” (NKJV).

“You are facing here a real financial crisis, and you need all the help you can get,” Wilson said. “If you place your trust in God as a stronghold, He will give you wisdom and insight.”

Leite replied that he was learning to trust in God. He recalled encountering difficulties as chief of staff to the mayor of Pelotas, a city of 350,000 people located 170 miles (270 kilometers) south of Porto Alegre. He said that finding answers had been as simple as opening the door of the mayor’s office, which was located beside his chief-of-staff office. But when Leite was elected city mayor in 2013, he suddenly realized that he had no door to open for help.

Motioning to an office window, Leite told Wilson that he looks at a neighboring cathedral whenever he faces seemingly unresolvable challenges.

“I tell people, ‘Here is the door. That is what I look to,’” he said. “I look to God for wisdom, and I hope that He is with me so I can do things correctly.”

Wilson emphasized that solutions come to those who place their trust in God.

“God is that stronghold, and you can open the door and ask for wisdom anytime,” he said. “James 1:5 tells us, ‘If any of you lacks wisdom, let him ask of God, who gives to all liberally and without reproach, and it will be given to him.’ I claim this text every day.”

Most of the meeting was in English, which the governor speaks fluently, but he and Wilson also enjoyed a conversation in French. Leite learned French while studying in France’s Normandy region, while Wilson served as a church leader for nine years in French-speaking Côte d'Ivoire in West Africa.

At the end of the April 26 talks, Wilson and the group presented the governor with several Christian books and a bottle of pure grape juice produced by Superbom, an Adventist-owned Brazilian food giant. He also prayed for Leite, his work, and Rio Grande do Sul state.

Southern Brazil was Wilson’s fourth stop on a two-week trip that started in Paraguay on April 21 and also included Uruguay and a brief stop in Argentina. In Paraguay, Wilson won a pledge from the country’s vice president to apply the principles of Micah 6:8 to his personal life and work. He also will visit Ecuador and Peru.

In Porto Alegre, Wilson visited two Centro de Vida Saudavel urban centers of influence that offer healthy cooking classes, language courses, and other community programs. One of the centers, located in the city’s north, has baptized 31 people and planted two churches in the past two years. Wilson prayed at one of those churches, which has 500 seats. The other Centro de Vida Saudavel site, located in the city center, is near a church-owned bookstore and health food store that also serves as an urban center of influence.

Also in southern Brazil, Wilson encouraged 1,500 people gathered at the Adventist Institute of Southern Cross in Taquara, a city located about 60 miles (100 kilometers) north of Porto Alegre, to be faithful in their Christian witness to others.

“You might say, ‘I’m not a preacher,’” he said. “But everyone is a preacher. By your life and actions, you are preaching a sermon.”

In Passos, Brazil’s cradle of Adventism, he spoke at the newly built Fazenda Passos Seventh-day Adventist Church and visited a neighboring church school, museum, and cemetery. The cemetery contains the grave of José Amador dos Reis, the first ordained Adventist pastor in Brazil, who received his credentials in 1920. Ivo Souza Adventist School, which opened 112 years ago, is the longest continually operating Adventist school in Brazil and has 150 students ages 4 to 14.

He spent at evening conversing with 17 young missionaries with the world church’s One Year in Mission initiative. The young people, representing the eight countries of the South American Division, are spreading the gospel for a year in Porto Alegre, which has a population of 1.4 million. The division choses a major city every year for One Year in Mission volunteers, and Porto Alegre was its target city for 2019.

Souza Lopes, president of the South Brazil Union Conference, expressed appreciation for Wilson’s visit, saying it had inspired church members and lifted up the union’s “Each One Saving One” program, which is inspired by the world church’s Total Member Involvement initiative.

“This visit was important for the unity of the church,” he said, noting that the last world church president to visit southern Brazil was Wilson’s father, Neal C. Wilson, who served from 1979 to 1990.

“Most of our church members joined the church over the past 10 years and didn’t know much about our worldwide church,” he said in an interview. “Now they have learned that the church is the same all over the world and that our president is a normal person just like us. He is very kind, very spiritual, and has improved our spirituality through God’s grace.”

Feeding the 800,000 In Bangladesh, thousands of Rohingya refugees have settled in camps. The ADRA International president visits one of these camps to share the challenges and what ADRA is doing to help.

Planting a Church in the City From the heart of the city of Melbourne, Australia. Pastor Roy and his family encounter a new and diverse group while they venture into church planting.