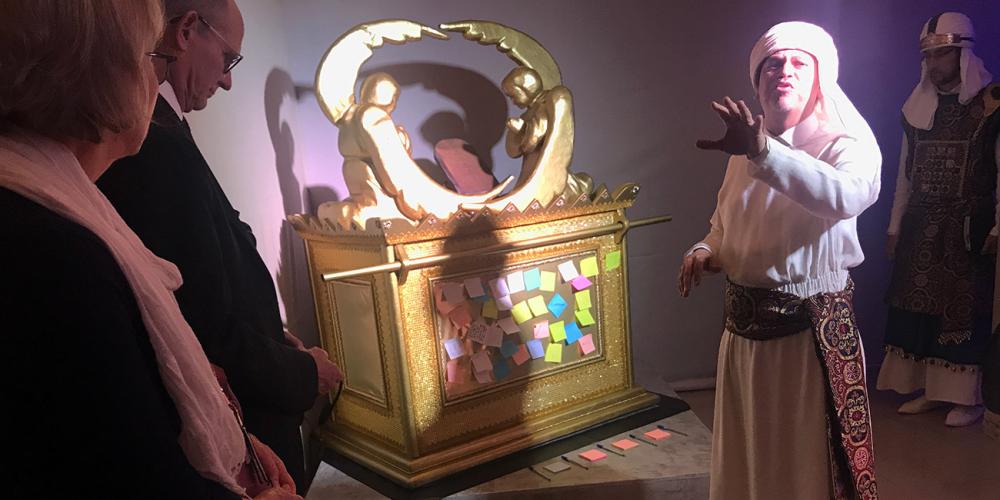 Christ’s work in the heavenly sanctuary takes the spotlight at a major convention in Brazil.

A gathering of 2,400 literature evangelists from across South America declared that Christ’s righteousness and His work in the heavenly sanctuary must be shared in streets and from door to door until Jesus comes.

Seventh-day Adventist Church president Ted N.C. Wilson emphasized the importance of Christ’s work as mediator and High Priest in the sanctuary’s Most Holy Place during a Sabbath sermon at the South American Division’s publishing ministries convention in Foz do Iguaçu, Brazil.

“Why do literature evangelists have the right to go?” Wilson asked.

He said the answer is found in Hebrews 4:14-16, and he read, “Seeing then that we have a great High Priest who has passed through the heavens, Jesus the Son of God, let us hold fast our confession. For we do not have a High Priest who cannot sympathize with our weaknesses, but was in all points tempted as we are, yet without sin. Let us therefore come boldly to the throne of grace, that we may obtain mercy and find grace to help in time of need.”

“Jesus is now in heaven ministering for you and for me in the sanctuary,” Wilson said. “In 1844, He entered the Most Holy Place in the sanctuary. Now a most magnificent work is taking place there, and we can share it.”

According to the Adventist Church’s understanding of the Bible, Jesus entered the Most Holy Place in 1844 to begin the process of reviewing and deciding on the names of all who have ever lived and their acceptance of His saving grace and righteousness, including His justifying righteousness and His sanctifying righteousness, which entitles them to eternal life. These will be found in the Book of Life.

Christ and His righteousness was a major theme at the weeklong “Until Jesus Comes” convention, which brought together literature evangelists from the eight countries of the South American Division and as far away as Russia. Helio Carnassale, director of the division’s Spirit of Prophecy department, gave a history lesson that concluded that the Adventist Church would not have embraced literature evangelism and other mission work if it weren’t for its understanding of Christ’s righteousness in the Most Holy Place.

“Only when our church fully understood righteousness by faith did we feel a full commitment to preach the gospel to all the nations of the world,” he said.

One of the most popular exhibits in the hotel convention center also focused on Christ’s mediatory work. Pastor Sergio Rodriguez of the Texas Conference in the United States took attendees on a hands-on tour complete with a replica altar, lampstand, ark of the covenant, and other sanctuary items. He spoke of long waiting lines all week.

“This is not an expo. This is a journey of prayer,” Rodriguez said as he escorted Wilson and other church leaders through the sanctuary developed by the Texas Conference.

Wilson challenged literature evangelists to keep Christ and His righteousness at the forefront of their work.

“Jesus is at the center of all that we do,” he said. “Jesus our only hope.”

Reading from Ellen White’s “Steps to Christ,” page 63, he said, “So we have nothing in ourselves of which to boast. We have no ground for self-exaltation. Our only ground of hope is in the righteousness of Christ imputed to us, and in that wrought by His Spirit working in and through us.”

“How many you want to say today, ‘Use me in your service until Jesus comes?’” he asked.

Delegates stood in commitment, and many raised their arms as a pledge.

Literature evangelism has served as an entering wedge for the gospel throughout the South American Division, with Adventism entering all but one of its eight countries through literature, division president Erton Köhler said.

“Until Jesus comes, literature evangelists are needed to raise hope,” he said.

The fruits of literature evangelism took the spotlight when a family of 17 entered the stage on Sabbath. Two literature evangelists from the convention had stopped by their family business a day earlier and given a copy of the world church’s 2019 missionary book, “Hope for Today’s Families” by Willie and Elaine Oliver, family ministries directors for the Adventist world church. The family, impressed with the book, closed their business on Sabbath to ask for Bible studies.

“We need this hope,” one family member said.

Adventists plan to distribute 22 million copies of the book across South America on May 25. The book can be downloaded in multiple languages at: family.adventist.org/missionarybook2019/.

At the convention, the South American Division unveiled a special medallion named after longtime division publishing ministries director Osvaldino Bomfim. The medallion, presented to retiring literature evangelists, recognizes the enormous contribution of Bomfim who, as a literature evangelist from 1957 and division director in the 1970s and 1980s, overhauled the division’s ministry to make it the dynamic force for spreading the gospel that it is today.

In being honored with the medallion, Bomfim made reference to a passage by Ellen White that is a favorite of literature evangelists. It reads, “Publications must be multiplied, and scattered like the leaves of autumn. These silent messengers are enlightening and molding the minds of thousands in every country and in every clime” (The Review and Herald, Nov. 21, 1878).

Meanwhile, Guillermo E. Biaggi, a general vice president of the Adventist world church, dedicated the Spanish and Portuguese versions of evangelist Mark Finley’s new book, “Secrets of Prophecy,” and Almir Marroni, publishing ministries director for the world church, paid tribute to literature evangelists who have died over the past decade.

Wilson prayed for Jose Carlos de Lima, general manager of the Brazil Publishing House; and Gabriel Cesano, general manager of the South American Spanish Publishing House in Argentina. The two men were featured in the Sabbath afternoon program, and their publishing houses represent the bulk of Spanish and Portuguese books produced in the South American Division.

Religious Freedom The vital importance of religious liberty around the world, mission in Vietnam, and in an unnamed country.

Feeding the 800,000 In Bangladesh, thousands of Rohingya refugees have settled in camps. The ADRA International president visits one of these camps to share the challenges and what ADRA is doing to help.