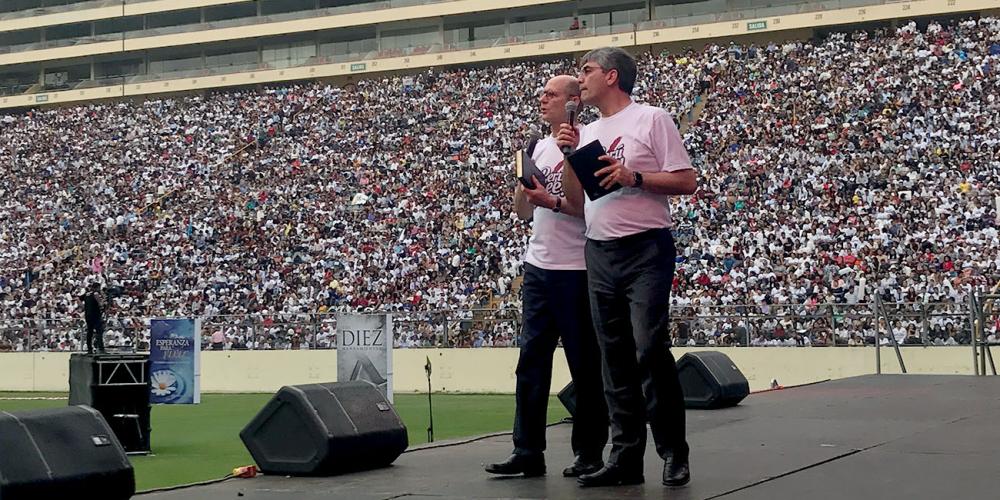 Seventh-day Adventist Church president Ted N.C. Wilson urged 52,000 people packed into a sports stadium to always have “beautiful feet” after many of them spent an afternoon distributing 2 million copies of the 2019 missionary book, “Hope for Today’s Families” in Lima, Peru.

Thousands of Adventists passed out copies of the book by Willie and Elaine Oliver, directors of the Adventist world church’s family ministries department, across Peru’s capital after Sabbath worship services on May 4. The initiative, called Impact Hope, was part of weekend celebrations marking the 100th anniversary of Peruvian Union University, an Adventist institution of about 12,000 students located outside Lima.

Wilson, wrapping up a two-week pastoral trip to South America, also dedicated the opening of the university’s first church building and attended an anniversary parade with 20,000 people over the weekend.

Speaking to the stadium crowd, representing half of the church’s membership in Lima, Wilson said church members do not need to be preachers to preach.

“Yes, God uses preachers and evangelists, but we all need to work together,” he said. “God is calling you today to preach the message in Peru.”

Wilson asked the audience to imagine being in heaven and being stopped by a stranger while hurrying to an appointment at Jesus’ feet.

“Your feet are beautiful,” the stranger says, pointing.

Surprised, you exclaim, “What? Tell me why my feet are beautiful.”

Wilson appealed to church members to share Jesus with others, to model His righteousness, and to serve others as He did as they engage in daily activities.

“Then your feet are beautiful,” he said.

The crowd, transported to the stadium in 3,000 leased buses, stood and raised their arms in a pledge to have beautiful feet by sharing Jesus with others.

“I hope everyone who receives a copy of the book, ‘Hope for Today’s Families,’ will read it and find important information for their families and to draw closer to God,” Wilson said in an interview with Hope Channel’s Peru affiliate while going house to house in a gated community.

Earlier that day, church leaders inaugurated a 5,000-seat church at Peruvian Union University in Miraflores, a suburb of Lima, replacing a large canvas tent where students and others had met for the past six years. Union president Quispe noted that the sleek new glass-and-steel structure was the most beautiful building on campus, as recommended by division president Köhler.

The university was founded by missionary Harry B. Lindquist as the Lima Training School in 1919, 21 years after Adventism first entered Peru with the arrival of church members from Chile.

“We started with a little over $1,000 and many promises,” Lindquist was quoted as saying in a promotional booklet that the university distributed for the anniversary.

To celebrate the milestone, the university decided to send 100 student missionaries around the world, Quispe said during Sabbath worship services. However, 102 students responded to the appeal, exceeding expectations, he said. Students carrying colorful flags representing countries in every part of the world marched to the stage for a special prayer of dedication for the mission project.

“What a wonderful way to turn a 100-year anniversary into mission!” he exclaimed during an evening conversation with local church leaders.

To the congregation at the university church, he said the initiative represents the heart of the Adventist movement: its mission to proclaim the three angels’ messages of Revelation 14 that Jesus is coming soon.

“Young people, I am so proud of you, your church is proud of you, and all of heaven is rejoicing for the service you have provided,” he said. “We are truly God’s people on the march toward heaven. Let’s all be involved in telling someone about Jesus.”

Adventist TV A missionary feels she is wasting her time. The next day, God surprises her with a glimpse of what He is doing through her.