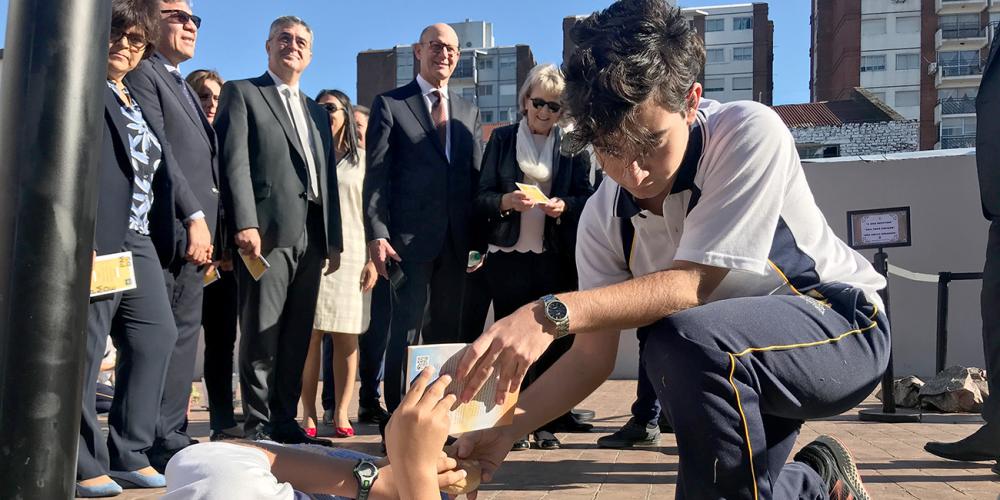 If J. Carlos Sanchez Ruiz were president of a Seventh-day Adventist union office in his native Peru, church members would courteously address him as “Pastor-President.”

But in Uruguay, where Sanchez Ruiz is president of the Uruguay Union of Churches Mission, he is known simply as “Carlos.”

No one addresses him as president. No one uses the word “pastor.” He is just “Carlos.”

Coming from Peru, a country where people are very conscientious about hierarchy, it took Sanchez Ruiz about a year to adjust to Uruguay when he first was elected president eight years ago.

“Uruguay is a country unlike any other in South America,” Sanchez Ruiz said in an interview. “Even though Uruguayans recognize and respect leadership, they do not accept the hierarchical model. A leader is equal to everyone else.”

The Uruguayan mindset, which Sanchez Ruiz linked to a strong European influence, makes the country a promising mission field, church leaders said. The Adventist Church has only 7,358 members in the country of 3.5 million people, or one Adventist for every 470 people, one of the smallest ratios in South America.

Adventist Church president Ted N.C. Wilson, who is on a two-week trip to six countries in South America, met with pastors and other church members in Uruguay’s capital, Montevideo, to encourage them in their mission outreach.

“How will we reach the cities? About half of Uruguay’s 3.5 million population lives in Montevideo,” he asked pastors gathered at the headquarters of the Uruguay Union of Churches Mission on April 24.

Opening his Bible, he read Jeremiah 32:26, which says, “Behold, I am the Lord, the God of all flesh. Is there anything too hard for Me?” (NKJV).

“God responds to His own question in a powerful way,” Wilson said, turning to Jeremiah 33:3 and reading, “Call to Me, and I will answer you, and show you great and mighty things, which you do not know.”

“Claim this promise for Uruguay and for your work in the cities,” Wilson said. “I’m going to pray very specifically for your work. You face challenges of secularism and materialism very much like Europe. But nothing is too hard for the Lord.”

Wilson arrived in Montevideo on the evening of April 23 with his wife, Nancy, and a small group of church leaders, including Erton Köhler, president of the South American Division; and Magdiel Pérez Schulz, assistant to the General Conference president. A van whisked the visitors to the Montevideo Central Seventh-day Adventist Church, where about 300 church members were celebrating worship services at the end of a specially called day of prayer. From the platform, Wilson pointed to the Bible and the writings of church cofounder Ellen White, which also are known as the Spirit of Prophecy, as the foundation for mission outreach.

“I encourage you to read the Word of a God every day and to read the Spirit of Prophecy, which will lead you to the Bible,” he said.

In addition to daily Bible study, he said he was reading two Ellen White books, “Christian Leadership” and “Christian Service.”

Wilson also said he claims two Bible promises every day — James 1:5 and Luke 11:13. James 1:5 says, “If any of you lacks wisdom, let him ask of God, who gives to all liberally and without reproach, and it will be given to him.” Luke 11:13 says, “If you then, being evil, know how to give good gifts to your children, how much more will your heavenly Father give the Holy Spirit to those who ask Him!"

“I want you to claim a promise from the Bible every day,” Wilson said.

Another influential urban center of influence in Uruguay’s capital is Montevideo Adventist Institute, a church school where more than half of the 190 students come from non-Adventist families. Wilson visited the school on April 24 and appealed to the children to follow Jesus every day.

“Consecrate yourselves to God in the morning. Make this your first work,” he said.

“Ecclesiastes 12:1 has a message for you because you are young: ‘Remember now your Creator in the days of your youth, before the difficult days come,’” he said. “Jesus loves you intensely and wants to be your Friend.”

Uruguay was Wilson’s third stop on a trip that began in Paraguay on April 21. While there, Wilson met with church members and gave an impromptu Bible study on Micah 6:8 to the country’s vice president, winning a pledge from him to make justice, mercy, and humility a part of his work and personal life. On April 23, Wilson and accompanying church leaders flew to Argentina and took a ferry to Uruguay. On the afternoon of April 24, Wilson flew from Montevideo to Porto Alegre, Brazil.

At the Montevideo airport, Sanchez Ruiz thanked the departing Wilson for his visit and said church members, especially the pastors, had been greatly encouraged to share the gospel.

“It was very important for our pastors to have had this visit by the world church leader,” he said.

Religious Freedom The vital importance of religious liberty around the world, mission in Vietnam, and in an unnamed country.