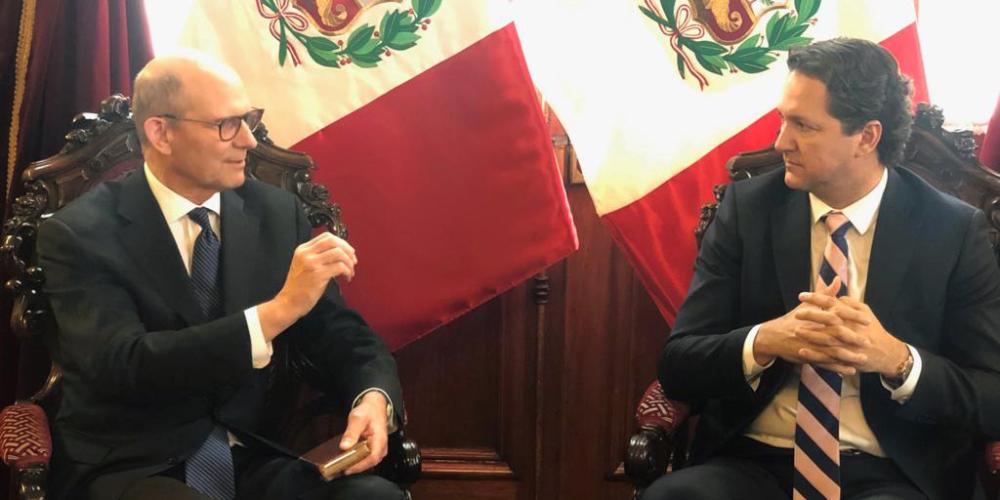 “I am only a servant of God,” Adventist Church president replies.

Peru’s parliamentary speaker presented Seventh-day Adventist Church president Ted N.C. Wilson with an official certificate for making a positive contribution to Peruvian society, and Wilson immediately declared that the honor represents the commitment of faithful church members in Peru and around the world.

Daniel Salaverry, whose official title is Congress president, welcomed Wilson and other church leaders to a 20-minute meeting in his ornate chambers in the sprawling marble national parliament building in Peru’s capital, Lima.

Wilson spoke about the Adventist Church’s hospitals and schools in Peru, and a plan by the country’s oldest Adventist university, Peruvian Union University, to celebrate its 100thanniversary by distributing 2 million copies of a book on building better families.

Salaverry expressed a familiarity with the Adventist Church’s work.

“What your church has done has created value for Peru,” he said.

He bestowed an official “certificate of honor” on Wilson in recognition of the church leader’s “religious work and contribution to improve the livelihood of individuals and families” in Peru.

Wilson was visibly touched by the gesture, and he thanked Salaverry.

Opening his Bible to Micah 6:8, he read, “He has shown you, O man, what is good; and what does the Lord require of you but to do justly, to love mercy, and to walk humbly with your God?” (NKJV).

He encouraged Salaverry to practice those biblical principles of justice, mercy, and humility.

“I present this beautiful citation to you as you have presented something beautiful to me,” he said.

Pastor Köhler prayed for Salaverry and the country of Peru.

The Adventist delegation then presented Salaverry and his team with copies of the church’s 2019 missionary book “Hope for Today’s Families,” written by Willie and Elaine Oliver, directors of the family ministries department of the Adventist world church. The meeting took place on May 3, a day before thousands of church members distributed 2 million copies of the book in Lima.

Peru’s parliament posted a photo of Salaverry, Wilson, and others holding copies of the book on Twitter.

Earlier May 3, Wilson and his team also met with a group of parliamentary lawmakers and encouraged with prayer, a promise of wisdom found in James 1:5, and copies of the book.

Salaverry was among several politicians with whom Wilson met during a two-week trip through six countries of the South American Division. He also shared Bible promises and prayers with Paraguay’s vice president, a Brazilian governor, a Brazilian mayor, and the incoming mayors of Guayaquil and another city in Ecuador.

The April 21-May 5 trip mainly aimed to inspire church members to be faithful and to actively proclaim the three angels’ messages of Revelation 14 that Jesus is coming soon.

In Ecuador, Wilson spoke with pastors and large crowds of church members at separate meetings in the capital, Quito, and the coastal city of Guayaquil, which the South American Division has designated at its Mission to the Cities outreach project for One Year in Mission volunteer missionaries in 2020.

In Peru, he also inaugurated the new headquarters of Central South Peru Mission in Lima and sang an impromptu song with a men’s quartet called Asaf before speaking at a Friday evening worship service. On Sabbath, he preached at a new 5,000-seat church at Peruvian Union University and later addressed 52,000 people in a Lima stadium.

“Thank you for having been with us for these past two weeks,” he said in a final video post outside the Lima airport on May 5. “Until the next time we are ready to interact and take another trip together, may God bless you as you participate in doing something for Jesus in a powerful way, helping everyone around you to know that Christ’s righteousness reigns in your heart and that soon Jesus will return to take us home. May God bless you as you engage in Total Member Involvement.”

Your Church Won't Save You When a disagreement about valuable land in New Delhi can't be settled, a Global Mission pioneer is threatened but offers to take care of the property until there is a resolution.