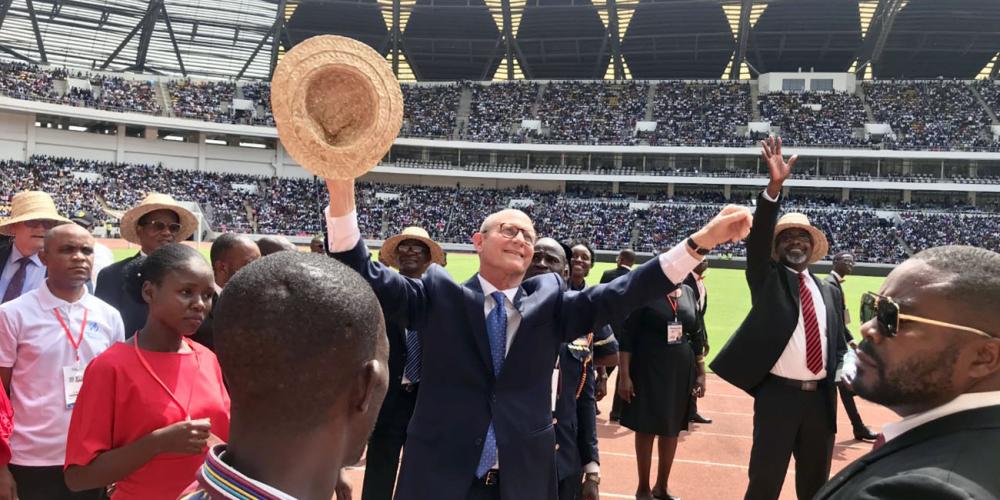 A crowd of 35,000 Adventists shouted and clapped with joy when Wilson announced the government’s pledge during a Sabbath sermon in a sports stadium in Angola’s capital, Luanda. Sabbath observance is a major challenge for many Adventist students in the African country.

Wilson raised the issue of Sabbath exams during a 30-minute meeting with Angolan President João Lourenço in the presidential palace on Feb. 13. Thanking the president for the religious freedom provided to Angolans, he said the country would contribute further to the development of society by extending freedom of conscience to everyone.

“It’s a matter of morals and freedom of conscience,” he said.

He pointed out that many of the church’s 650,000 members in Angola are young. An estimated 80 percent of the 210,000 baptized Adventists in Luanda alone are under the age of 30.

Lourenço, who opened the meeting by thanking Wilson for the Adventist Church’s efforts to lift up society, agreed to take a serious look at rescheduling Saturday exams. A Christian himself, he suggested that the exams could be moved to Friday or Monday for Adventist students.

Wilson made a second appeal over Sabbath classes while meeting in the parliamentary building with Fernando da Piedade Dias dos Santos, president of the National Assembly. During the Feb. 14 meeting in the speaker’s ornate office, Wilson mentioned that he had spoken about a Sabbath reprieve with Lourenço a day earlier.

'We Will Do Our Best'

Piedade said the issue was complicated and required research, but he called the request timely, noting that a senior lawmaker responsible for drafting religious legislation was present at the meeting. The lawmaker and a second man took careful notes as he spoke.

“We will do our best,” said Piedade, a veteran politician who previously served as Angola’s vice president and prime minister. “Give us time.”

Wilson made the request after, with Piedade’s consent, sharing a Bible verse and praying with him. Wilson encouraged Piedade to trust in God in his life and to claim Nahum 1:7, which says, “The Lord is good, a strong hold in the day of trouble; and he knoweth them that trust in him.”

Piedade was visibly moved by the prayer, and he thanked Wilson profusely for asking God to bless and guide him, his family, his work, and Angola,

“Angola has many problems and needs prayer,” he said.

Pausing, he chuckled and added, “I also read the Bible.” He said he especially likes Psalm 91.

Speaking in an interview, Wilson said he was encouraged by the response from Angola’s leaders, and he credited the Holy Spirit for inspiring him to bring up the issue in the first place. Sabbath exams were not on the agenda at any of the meetings, which church leaders had sought to thank the leaders for interceding on behalf of four Adventist pastors and two others falsely accused of a crime.

A massive multitude gathered for the Sabbath worship service in Estádio 11 de Novembro stadium roared and burst into applause when Wilson spoke about his conversation about Sabbath exams with the president.

“Let’s pray that our students will be able to take Sabbath exams on another day of the week,” Wilson said in his sermon, according to a summary posted on his Facebook page.

Wilson’s appeal resonated with Adventists worldwide who were following his trip on Facebook.

“Thank you for lending your voice to the appeal against Sabbath exams and things pertaining to Adventists in Angola,” Chioma Eti, of Port Harcourt, Nigeria, wrote on Wilson’s Facebook page.

Nigeria is among the countries were Sabbath exams and classes have been a challenge for Adventists.

“Thank[s] be to God for letting you intervene for the people of Angola, especially on the issues of Sabbath exams. God bless you,” wrote Patrick Kwaku Mensah of Kumasi, Ghana.

Wilson has spoken previously about Sabbath exams with heads of state. In 2018, he raised the issue during talks with Ugandan President Yoweri Museveni and, within 24 hours, Museveni tweeted that exams would no longer be held on Fridays, Saturdays, or Sundays so people of all faiths could keep their holy days.

In Angola, the Adventist Church has few schools for its members, leaving many with few options other than public schools. Hoping to change that, church leaders broke the ground for the first Adventist institution of higher education in Luanda during Wilson’s visit.The technical college, ISPAL, will offer business and computer courses and may open in 2022.

The Power of One Baptism What is the power of one baptism? The Holy Spirit used Yana’s decision to be baptized to touch the hearts of eight other people.

Adventist Visit With Angolan Leader Takes National Spotlight It is an answer to prayer for a church leader who was falsely accused of corruption.