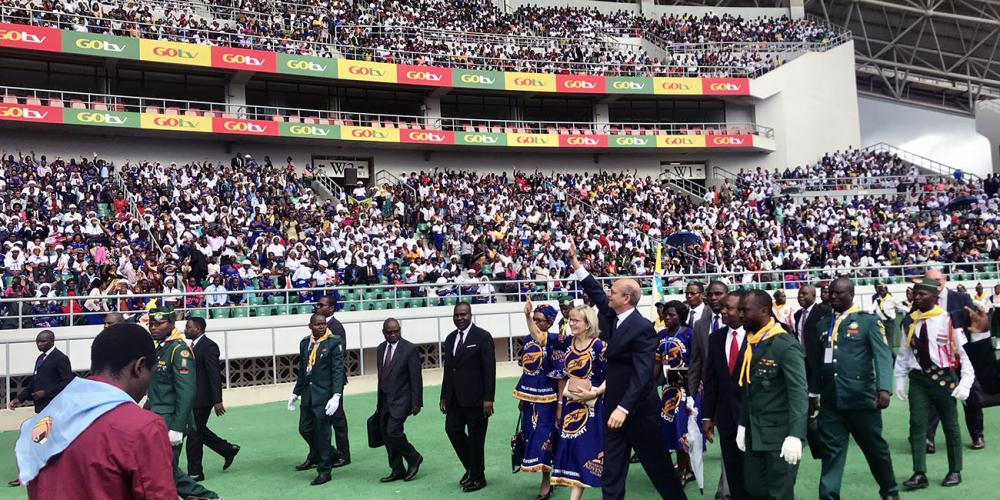 If anyone in Malawi had never heard of Total Member Involvement, there was a good chance that they had learned about the Seventh-day Adventist initiative by the end of a whirlwind visit by church president Ted N.C. Wilson.

Wilson emphasized Total Member Involvement, or TMI, at a meeting with Malawi’s president, during talks with the mayor of Malawi’s national capital, and in a Sabbath sermon attended 40,000 people in the country’s largest stadium.

Thousands more Malawians heard about the initiative, which calls for everyone to do something for Jesus, through live broadcasts of Wilson’s sermon on four national television channels and four radio stations and widespread coverage of his activities in major newspapers.

“His coming was a blessing not only to the church but to the whole country,” said Kuyama, president of the Malawi Union Conference.

Wilson, who is partway through a three-week pastoral trip to five countries, began his trip to Malawi with an hourlong meeting with President Arthur Peter Mutharika in Kamuzu Palace in the capital, Lilongwe, on Feb. 7. Seated with a small delegation of local and regional church leaders, Wilson described Malawian Adventists’ commitment to serving others physically, mentally, socially, and spiritually — the four key areas of TMI.

“We really are trying to follow in the footsteps of Jesus,” Wilson said.

Mutharika spoke warmly about the Adventist Church and underscored his own love for Christ.

“I am here to serve God because I serve the people,” he said, reading from prepared remarks.

With his consent, Wilson shared two Bible verses as well — Nahum 1:7 and James 1:5 — and prayed for him, the government, and Malawi and its predominantly Christian population of 18.5 million.

Later that day, Wilson highlighted TMI during a City Hall meeting with Lilongwe Mayor Juliana Kaduya and other municipal leaders.

In all his meetings, Wilson reminded church members that TMI means proclaiming the three angels’ messages of Revelation 14 that Jesus is coming soon.

The major thrust of his message came during the Sabbath sermon at Bingu National Stadium in Lilongwe on Feb. 8. Urging church members to follow Jesus’ example of compassion, Wilson read Matthew 14:14, which says, “And when Jesus went out He saw a great multitude; and He was moved with compassion for them, and healed their sick” (NKJV).

Continuing with Matthew 14:15-21, Wilson related the miracle of the feeding of the 5,000 and appealed to church members to be like the boy who gave his five loaves and two fish to Jesus.

TMI, introduced in 2015, has been enthusiastically embraced by many church members worldwide, and it is credited with a surge in baptisms in some countries, notably a record 110,000 baptisms in three weeks in Rwanda in 2016. The next major TMI evangelistic effort is expected to result in thousands of baptisms in Papua New Guinea in May 2020.

In Malawi, Wilson’s visit received extensive coverage in the media, and large throngs of people followed him wherever he went.

Solomon Maphosa, president of the Adventist Church’s Southern Africa-Indian Ocean Division, who accompanied Wilson, said he was impressed with the large turnouts and the relevancy of Wilson’s message.

“I can’t remember a place where he spoke and didn’t mention the three angels’ messages,” he said. “If we don’t talk about it, who will?”

In an indication of the far-reaching impact of the message, it resurfaced on a cake at Lake Malawi. A chef at a lake-side hotel, nearly a two-hour drive east of Lilongwe, made a cake in the shape of a black Bible with red-edged pages. On top, he piped the words, “Matthew 14:14,” in blue icing.

The chef, Kapina Moyo, presented the cake to Wilson and other visiting church leaders as their trip to Malawi came to a close.

“I was touched while watching the sermon on television,” said Moyo, who belongs to another Christian denomination. “So I decided to bake a cake.”

Small Church Plant in the Big City Up until recently, there were few Adventist congregations in Montevideo. Certain parts of the city were completely untouched by the Adventist message. But it was here that the Adventist Church of Goes started.