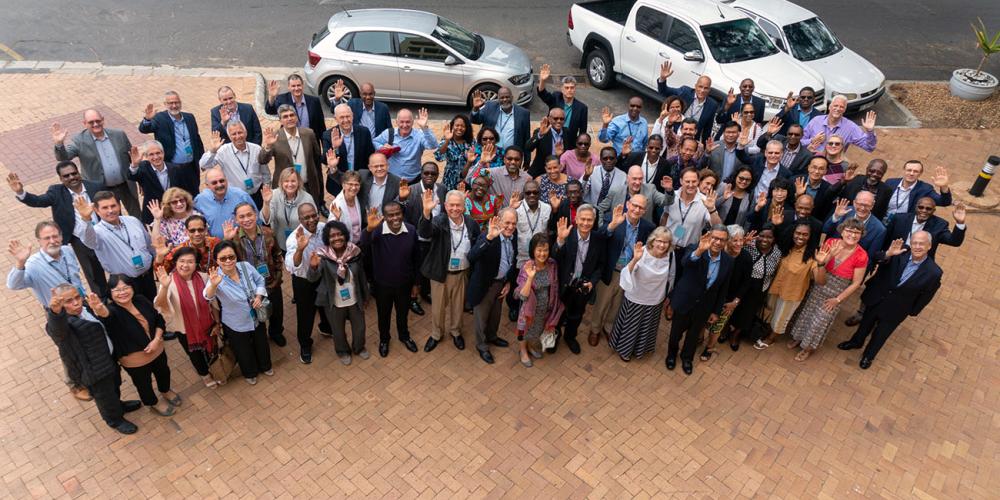 Solomon Maphosa worked as a pastor for three years in his native Zimbabwe before being asked to serve as conference stewardship director.

On the first day, the conference president prayed with Maphosa and showed him to his desk.

Maphosa didn’t know what to do. He called around, but no one seemed able to help. He had to come up with his own ideas for how to work.

“No one held my hand. No one,” he recalled. “It was a swim-or-sink experience.”

The scenario was repeated when he became youth director, Sabbath School director, conference executive secretary and, later, conference president. The cycle ended when he returned to school.

“When I got my doctorate in ministry, I finally learned what leadership is all about,” said Maphosa, now the president of the Southern Africa-Indian Ocean Division.

The story, which happened years ago, may not reflect the norm in the Seventh-Adventist Church today. But it serves as a reminder that the church can do more to train young church leaders and others, and to provide ongoing training for its current leadership, world church leaders said at the church’s 13th Global Leadership Summit.

To that end, summit participants enthusiastically endorsed a General Conference proposal to establish an institute focused on leadership, innovation, and mission at the church’s headquarters in Silver Spring, Maryland. The institute, located in space vacated by the North American Division, would provide hands-on, practical training to leaders from around the world.

“We need to work in a smart way to create mission-driven results,” Adventist world church president Ted N.C. Wilson said in unveiling the proposed institute on Feb. 5 at the leadership summit in Cape Town, South Africa.

Plans for the institute are tentative, and details have yet to be worked out. But Wilson said it could oversee and integrate existing church leadership programs such as the Global Leadership Summit, General Conference departmental advisories, and the LEAD conference, which has been coupled with Annual Council meetings for the past decade.

“All of these things would fit together into a new mosaic,” Wilson said. “We are looking how to reimagine and refocus on a mission-results method and process.”

He emphasized that the institute, if realized, would work synergistically with divisions, educational institutions like Andrews University, and rely on other existing resources not hiring a meaningful number of staff. It would also be very practical in its approach to training resulting in mission-driven, practical results benefiting local outreach projects and the world field proclamation of Christ and His three angels’ messages of Revelation 14.

The institute is a brainchild of General Conference treasurer Juan Prestol-Puesán, who approached Wilson with the idea around the time that the North American Division moved its 132 employees to a new headquarters in Columbia, Maryland, in 2017. The vacated, first-floor space of 40,000 square feet, once occupied by the division’s retirement services, has abundant natural lighting and the possibility of its own street entrance.

“It’s a very desirable area,” Prestol-Puesán said at the summit. “About three years ago, I shared the idea with Elder Wilson. … We started thinking and praying.”

This year’s Global Leadership Summit gathered 55 leaders and 30 spouses from the General Conference, the church’s 13 world divisions, ADRA, several universities, and other entities for two days of talks under the theme “Leadership and accountability, transparency, integrity, and loyalty: Vital spiritual elements for God’s last-day church and its message.” Among the presentations, Ella Simmons, a general vice president at the General Conference, spoke about church cofounder Ellen White’s views on integrity in leadership, and Guillermo E Biaggi, summit organizer and a general vice president at the General Conference, offered a biblical perspective on leadership.

The proposal for the leadership institute received strong support from summit participants.

“I believe this is an idea whose time has come,” said Maphosa, the division president, who spoke at the summit about his swim-or-sink experience in church employment. “Young people need this, and people like me also need a refresher course.”

“This has been a burden of mine for many, many years,” said Ng, who coordinates the LEAD conference.

The institute could provide invaluable training for leaders of the hundreds of urban centers of influence that the church operates worldwide, said Michael Ryan, adviser to the General Conference president and founder of the Global Leadership Summit.

“I like very much what I am hearing,” he said.

North American Division treasurer G. Alexander Bryant spoke of his own need to train conference and union officers and said a leadership institute could offer those officers with a broader perspective of the global field.

“We would like to receive training that can only come at the General Conference level,” he said.

Several leaders applauded the proposed focus on innovation in the 157-year-old Adventist Church.

“This ministry opportunity really takes us back to who we are as Adventists,” said Thomas Lemon, a general vice president at the General Conference. “The Lord did a new thing when He established our church with a farmer preaching prophecy and a young girl called to be a prophet. It seems to me that this is taking us back to being refreshed and reenergized by the Spirit on a regular basis to keep us from becoming stuck.”

“I hope this center … stirs the water for creative thinking, for innovation, for thinking out of the box,” added Geoffrey Mbwana, another general vice president at the General Conference. “I think this would give a good opportunity for us as a church.”

Erich Baumgartner, a leadership professor at Andrews University, which is collaborating with the General Conference on the project, said the institute would move the church’s leadership training to the next level.

“I cannot tell you how excited I am to just listen,” he said as summit participants eagerly discussed the institute.

Wilson emphasized that “whatever we do must be highly, highly spiritual” and focused on mission.

“Everything we do from now on has to result in some measurable benefit for mission,” he said. “That is the only reason we are here: to see people get to heaven by the grace of Jesus.”

The Punishing Convert A bar in Moldova is transformed into an Urban Center of Influence, a Global Mission pioneer working in Ethiopia, and a high-ranking military official is baptized in Spain.