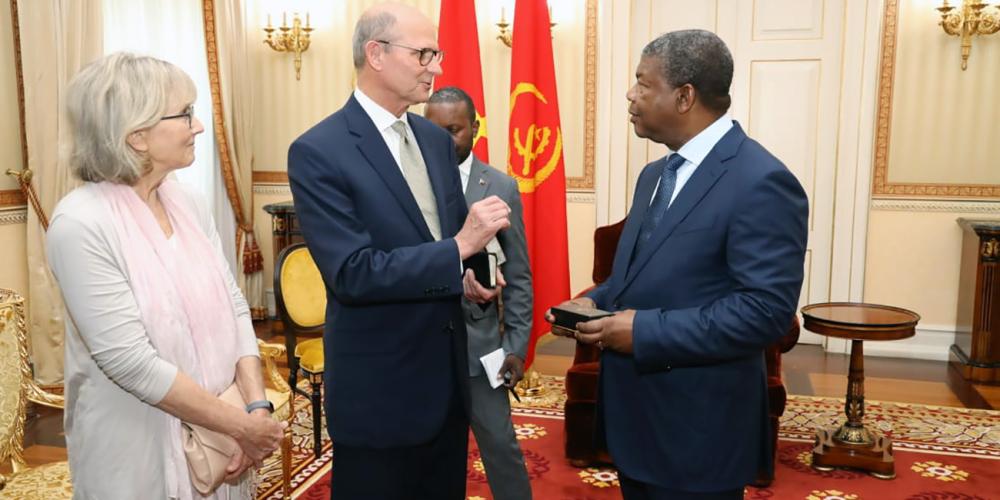 It is an answer to prayer for a church leader who was falsely accused of corruption.

Seventh-day Adventist Church leader Ted N.C. Wilson sought to meet Angola’s president to thank him for intervening in a horrific case in which six Adventists were falsely accused of kidnapping and extortion.

But he and other church leaders say the Holy Spirit blessed the presidential meeting exceedingly abundantly above all that they could ask or think by using it to put a national spotlight on the Seventh-day Adventist Church, the power of prayer, and the importance of claiming God’s Word in everyday life.

The meeting — during which Wilson prayed for the president and turned to the Bible to encourage him in a war on corruption — resulted in major coverage on television channels and front-page headlines in newspapers.

For one of the six falsely accused Adventists, it was an answer to prayer.

“From the day that I was put in prison, I prayed that God would use the situation to glorify His name to all Angola,” said Burns Musa Sibanda, treasurer of the North-Eastern Angola Union Mission, who spent 62 days in prison. “God has done just that.”

President João Lourenço welcomed Wilson and a small delegation of church leaders to the presidential palace, and Wilson expressed gratitude on behalf of the Adventist Church for his role in the vindication of the six Adventists.

“We thanked him for his intervention in the terrible, false accusations against some of our church leaders who ended up in jail,” Wilson said after the Feb. 13 meeting. “He helped them overcome the corruption in the system so they were liberated.”

Four pastors, including Sibanda, and two laymen were falsely accused of kidnapping and extortion in a case that church leaders and the government have linked to epidemic corruption in the country. One of the laymen died after being brutally assaulted in police custody in an attempt to force him to testify against the others. Angola’s Supreme Court fully acquitted the Adventists in 2019.

Lourenço, who spoke warmly about the Adventist Church’s efforts to lift Angolan society, listened gravely as Wilson extended his thanks.

“I remember the case,” he said.

Angolan authorities have opened an investigation into the false accusations. Several government officials have lost their jobs, but no one has been charged.

The 30-minute meeting ended with Wilson praying for Lourenço, his family, the government, and the people of Angola.

National television channels featured the meeting on their news broadcasts that night and on regular news bulletins throughout the next day, emphasizing Wilson’s encouragement in the fight against corruption and highlighting the Bible verses that he shared with the president. At least one news program showed Wilson praying with the gaggle of journalists who interviewed him after the meeting with the president. The day after the meeting, the main front-page headline in the country’s largest newspaper, Jornal de Angola, read, “Adventist World Church Leader Backs Fight Against Corruption.” The accompanying news article quoted the entire text of Philippians 4:8.

Church leaders who accompanied Wilson on the visit praised God for the outcome.

“This was good,”said Solomon Maphosa, president of the Southern Africa-Indian Ocean Division. “God is good.”

“The was a very, very important meeting,” said Justino Junior Paulo, president of the North-Eastern Angola Union Mission. “It was important that he gave a Bible study and prayed with the president.”

More Visits and a Stadium

Wilson also expressed appreciation to the country’s attorney general, Hélder Pitta Grós; parliamentary speaker, Fernando da Piedade Dias dos Santos; and interior minister, Eugénio César Laborinho, for their assistance in the case of the falsely accused Adventists. At each of the three meetings on Feb. 14, Wilson shared verses from the Bible and prayed with the leaders.

Ganoune Diop, director of the Adventist world church’s department for public affairs and religious liberty, said he was grateful to God for the support and work of the attorney general and ministers during four trips to Angola during the ordeal.

“I still keep praying that our Lord will help our brothers and their family heal from this traumatic experience,” he said via WhatsApp.

Wilson, recounting the government meetings during his Sabbath sermon to 35,000 people gathered in a sports stadium, called on all Adventists to be honest and mission-minded. He noted that the instigators of the false accusations were Adventists.

“It doesn’t matter which tribe you come from, which local language you speak, or which people group you are from,” he added, according to a summary of his sermon on his Facebook page. “All of us who love Jesus are one in the Lord, and we ought to be focused on one thing: the mission of the church. Do not tear down other people or claim your rights. Instead look to Jesus and His mission. I want to ask all of you in Angola to unite in the mission of telling others that Jesus is coming soon!”

On Sabbath afternoon, Wilson comforted the widow and other family members of João Alfredo Dala, the Adventist layman who died at age 45 from internal injuries suffered as a result of the violent police interrogation.

“Our hearts are heavy,” he said. “He died as a martyr for Jesus. He is a hero. God knows the future, and I believe that he will be resurrected again. We want you to know on behalf of the world church family that you are in our prayers that your sacrifice has been beyond what most people endure. God will bless you. Know that our hearts beat in harmony with you.”

The church has plans to create a trust fund for the widow and her 10 children.

Sibanda, the union treasurer, who was jailed for 62 days, also described Dala as a martyr for Jesus.

“If he had agreed to tell a lie against us as he had been asked to do by the authorities, we would still be in prison,” he said. “I owe him the freedom that I am enjoying today.”

New Friends and New Beginnings Deeply depressed, Consuelo abandoned her belief in God until one day she visited an Urban Center of Influence and met Michelley and Angy. From this point on, her life changed!