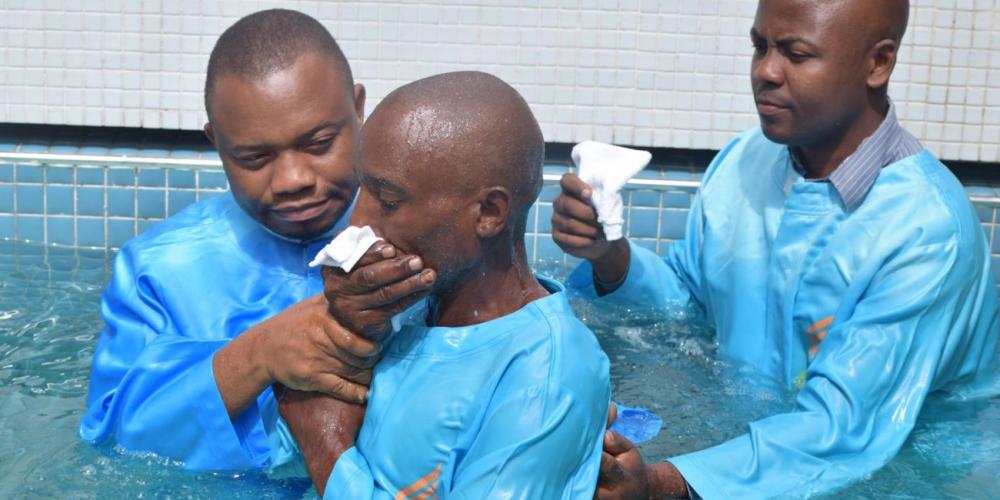 Tanzania and Uganda on Fire With 117,000 Baptisms

About 24,000 speakers, mostly lay people, participated in June 16-July 1 evangelistic meetings at 8,000 sites in the neighboring African countries, church leaders said Wednesday. Thousands of church members also reached out to their communities with free medical clinics and other forms of practical assistance.

“We praise the Lord for His leading this far,” said Joel Okindoh, director of evangelism for the Adventist Church’s East-Central Africa Division, whose territory includes Tanzania and Uganda.

Okindoh credited Total Member Involvement, or TMI, with playing a key role in the baptisms and said all church members needed to be encouraged to make it part of their everyday lives.

“The greatest task is to nurture these new believers and to make TMI the lifestyle of our unions, conferences, local churches, institutions, and individual members,” he said by e-mail.

TMI is a world church initiative that encourages each of the church’s 20 million members to actively share Jesus with others.

Among the TMI efforts in Uganda, Adventist health professionals ran a weeklong free medical clinic in the city of Mbarara that treated more than 800 people a day, the East-Central Africa Division said on its website.

Ham Youngsik, a South Korean pastor and missionary, who assisted with the free clinic, expressed joy that 35 patients were baptized.

“God avails money and skills to do His work,” he told the website.

The latest baptisms mark the second time that the Adventist Church as surpassed the 100,000 mark during a TMI evangelistic campaign. A similar initiative in May 2016 resulted in 110,000 baptisms in Rwanda, which is also part of the East-Central Africa Division. TMI evangelism took off with 30,000 baptisms in Zimbabwe in 2015, and it has led to thousands of baptisms in Romania, Ukraine, and the Philippines so far this year. In Kenya, 73,000 people were baptized in March alone as local church members aim for an annual record of 400,000 baptisms.

“After the Total Member Involvement experience in Rwanda in 2016, TMI has become a standard feature of the East-Central Africa Division!” Adventist Church president Ted N.C. Wilson said on his Facebook page. “We praise God for how the lay people are rallying to the call to become completely involved in soul winning. What a joy to see the thousands upon thousands being baptized through the Holy Spirit’s power and the hard work of pastors and lay people united in mission for Christ sharing the good news of the three angels’ messages and Christ’s soon coming. Let’s all be part of TMI!”

Duane McKey, who oversees TMI for the Adventist world church, said that after Rwanda the world church provided the East-Central Africa Division with 1,200 special video projectors that work with only a flash drive, no computer needed, and he encouraged division leaders to hold 20,000 evangelistic series in 2017.

“It looks like they are well on their way,” he said by e-mail. “Like Pastor Blasious Rugori, president of the East-Central Africa Division, says, ‘God is up to something HUGE.’”

TMI evangelism has not only led growing numbers of people to Christ but also encouraged visiting speakers to expand the program in other countries. Hugely successful evangelistic meetings across Romania in February prompted the Inter-European Division, whose leaders preached at the meetings, to announce that it would expand the initiative throughout its territory.

About 550 foreign guests from within and without the East-Central Africa Division participated in the Tanzania and Uganda events. The visitors left inspired to follow the model in their home countries, Okindoh said.

“TMI has generated a spiritual revival among all the participants and enhanced unity through foreign guests’ involvement across the territories,” he said. “TMI is here to stay by the grace of God.”

​How 14-Year-Old Girl Found Sabbath in Kyrgyzstan Trouble with school and pork couldn’t stop her from observing the seventh day.