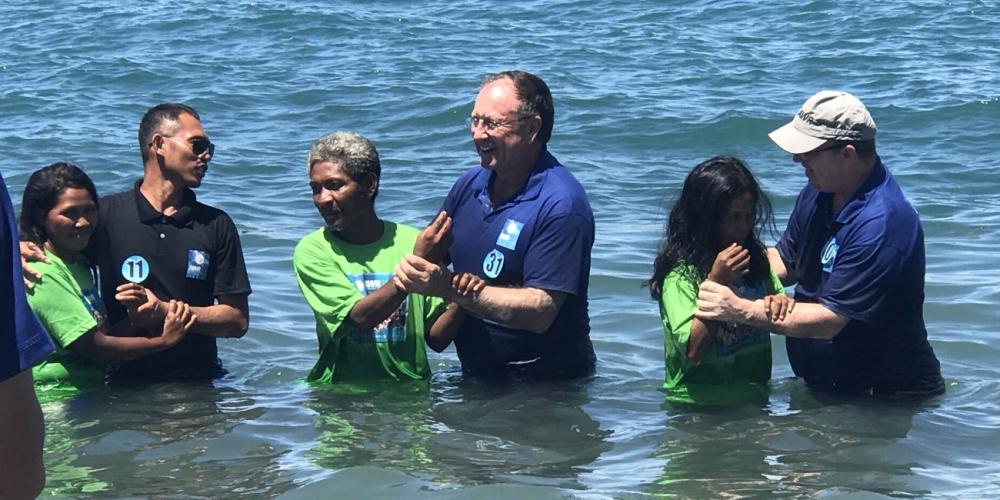 About 1,400 people were baptized on a Philippine island after a groundbreaking evangelistic campaign propelled by 48 Japanese presenters and Adventist World Radio.

Among those who gave their hearts to Christ on Mindoro island on Sabbath, June 24, were dozens of former Adventists, an entire village of 85 people, and 12 villagers who hiked for 12 hours to reach the nearest river.

The outreach effort, which saw a total of 15 villages express an interest in baptism, marks the first time that Adventist World Radio has taken a frontline role in the Seventh-day Adventist Church’s Total Member Involvement evangelistic meetings, and it is to be replicated in Japan next year.

The evangelistic work started on March 1 when nine local radio stations started airing one to three hours of Adventist World Radio programming daily across Mindoro, which is the seventh-largest island in the Philippines and located five hours by boat and car south of the Philippines’ capital, Manila.

But the health and lifestyle programs generated little response over the first three weeks, so Adventist World Radio tweaked the programming to include daily evangelistic sermons on topics such as the state of the dead and the seventh-day Sabbath, McKey said.

At 11 a.m. every day, listeners were asked a question about the previous day’s sermon, and the first five people who called in with the correct answer received a small radio, a copy of Ellen White’s book “Steps to Christ,” or another gift.

“The response mushroomed,” McKey said, speaking by telephone from Manila on Sunday. “People were running down the mountains to find a radio to listen to the sermons. They were excited. They took notes as they listened so they could answer the question the next day.”

“The focus was connecting people with the local churches, and that is why it worked so well,” McKey said.

About 1,400 people were baptized on Sabbath, and more than 100 others will be baptized in the next week or two.

McKey participated in the baptisms at the village of 85 people, baptizing the village chief and other villagers.

Later in the day, he and other church leaders met 12 baptismal candidates at a river 48 miles (77 kilometers) from their mountainside village.

“They walked a solid 12 hours to get to the river for baptism,” McKey said.

All 250 families of the village had wanted to be baptized after listening to sermons on the radio, but the others weren’t ready, he said.

“We sent a Bible worker to work with them,” he said.

Twenty-five families made the 12-hour walk to attend the baptisms.

The radio broadcasts and evangelistic meetings also brought former Adventists back to church, and they were rebaptized on Sabbath.

It wasn’t immediately clear how many residents from the 15 villages who expressed interest in baptism were baptized on Sabbath, but five villages have decided to prepare for baptism. Another island with 10 villages just contacted Adventist World Radio just this weekend to request a Bible worker to help villagers prepare for baptism.

Adventist World Radio has decided to expand its broadcasts and set up a permanent presence in the Philippines, McKey said.

“We were going to broadcast only for six months, but now we will broadcast for another year and help them get their own radio station,” he said.

Thirty pastors and 19 laypeople from Japan participated in June 9-24 evangelistic meetings in Japan.

The Japanese presenters — who are preparing for national evangelistic meetings in Japan in 2018 — were reenergized by the experience, McKey said.

“They said this was so life changing,” he said. “Some thought that public evangelism couldn’t be done anymore, but now they see that you can preach the message and get results.”

Enthusiasm also is growing back in Japan, with one local church voting a U.S.$120,000 budget for public evangelism next year. McKey said the day after the church board approved the budget, the pastor found three envelopes containing $10,000 each in his office. The following Sabbath, an elderly church member placed another $10,000 in the Sabbath School offering plate.

“Church members are saying, ‘Do something!’” McKey said. “It’s been a thrill to see that happen.”

June 24 - Our Mission is People At Babcock University, mission is priority! Watch to see how your 13th Sabbath Offerings can make a difference on this campus in Nigeria.