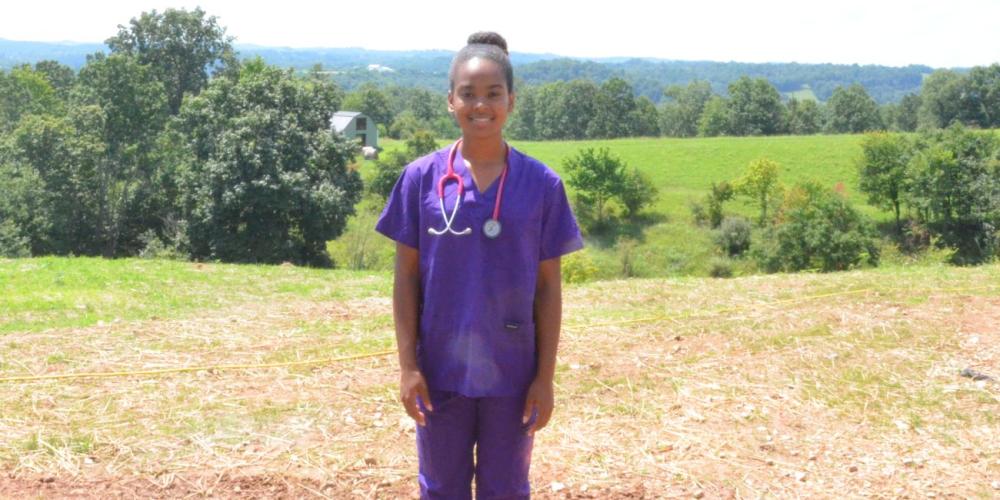 She Wanted to Go to Community College. God Had Other Plans

Jamaican teen works hard and trusts God one day at a time at an Adventist school.


As she finished high school, Jo-Anna Clayton devised a perfect plan for college.

For the first year, she would enroll in a community college in her home state of West Virginia. This way she could take basic classes at reduced tuition costs and stay with her parents and three younger sisters for one more year.

Jo-Anna’s plan collapsed during the summer. She just couldn’t find a way to get to the community college from her parents’ rural home.

She couldn’t obtain a driver’s license because her parents, natives of Jamaica, were sorting out the family’s U.S. residency papers. Her parents couldn’t drive her back and forth, and no public buses stopped near her home. For a while, she hoped that a friend with a car might enroll at the community college, but that didn’t happen, either.

“I realized that my plans were falling through,” Jo-Anna said in an interview. “My parents said, ‘You could take a year off and help around the house.’ I said, ‘No, I can’t do that!’ I didn’t want to be at home and not doing much to advance my future. I was focused on wanting to get my original plan working. I don’t give up easily. Even though I realized it wasn’t going to work out, I kept trying.”

Soon, only a month remained before the start of the school year, and she had nowhere to study. Even though she had been accepted by three Adventist schools, she had not formally applied and paid the associated fees.

Then her mother, Suzanne, remembered that family friends worked at Weimar Institute way across the country in California.

“What about Weimar?” she asked.

Jo-Anna immediately went online and did some research.

“I don’t want to go to California!” she told her mother. “That’s too far away.”

“You should at least think about it and pray about it,” her mother replied.

Jo-Anna couldn’t disagree with that. “Whatever God says to do, I will do,” she said.

A week later, Jo-Anna spoke with a Weimar recruiter about the school’s nursing program, and she began to think that maybe — just maybe — God wanted her to study there. But a major barrier stood ahead: Her parents could only pay for the down payment and the first three months of classes.

Then a series of unexpected events rapidly unfolded.

Jo-Anna applied for and received a three-way scholarship in which Weimar and the Adventist Church’s Mountain View Conference, which encompasses West Virginia, matched a $500 donation from her home church in Spencer.

While assisting people affected by local flooding that summer, Jo-Anna connected with a group of Adventist physicians who pledged $500 a month toward her tuition. The physicians ran a worthy student fund financed by money from patients whom they had to see on Sabbaths.

Jo-Anna raised $1,800 by writing financial assistance letters to family friends, and Weimar matched the amount through its own worthy student fund.

Jo-Anna had enough money to enroll, and she flew to Weimar to start classes in the fall.

“I didn’t have any doubt that I was where God wanted me to be,” she said.

While she missed her family dreadfully for the first few months, the realization that she was at the center of God’s will energized her as she worked 25 hours a week to earn more tuition money.

Jo-Anna, now 19, completed her first year debt-free, and she spent this summer working as a babysitter and doing odd jobs to raise funds for the second year.

Again, money has been trickling in from other sources. Jo-Anna’s home church organized a benefit concert with musical numbers by Jo-Anna, who plays the violin, and other young people. It brought in $1,800.

Inspired by the concert, a church member organized a spa week, with hand, foot, and facial massages, and the proceeds of $400 went toward tuition.

“It is pretty awesome how my church family helped me,” Jo-Anna said.

Like last year, Jo-Anna doesn’t know how she will pay her tuition, but she isn’t worried. She is claiming a favorite promise, “Being confident of this very thing, that He who has begun a good work in you will complete it until the day of Jesus Christ” Philippians 1:6 (NKJV).

Jo-Anna Clayton says, “He who calls you, will also do it.” (Courtesy of the Clayton family)

​First Grader Asks About Man ‘Hanging on That Wood’ Mission teacher Suzann Self finds that children in Canada have never heard about Jesus.