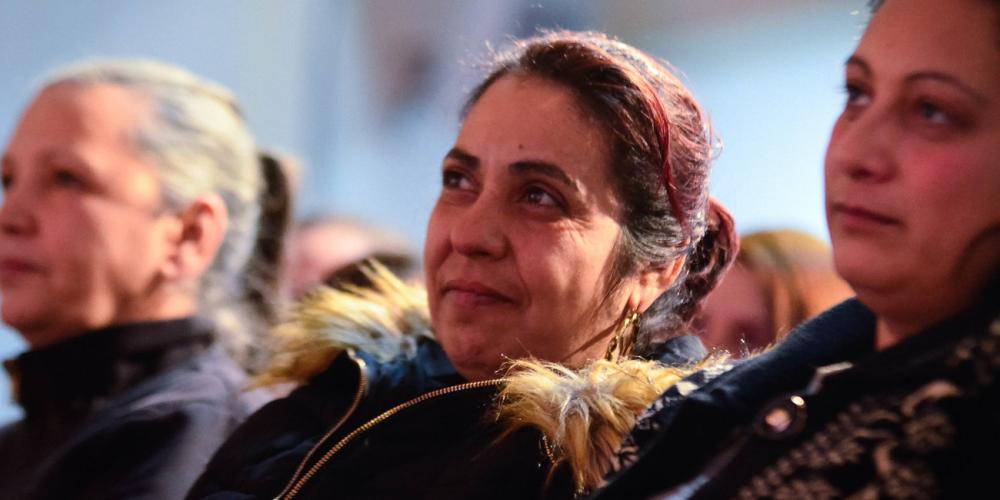 Pastors had worried about poor weekday attendance, but turnout is proving strong.

Unexpectedly large crowds are flocking to Seventh-day Adventist evangelistic meetings in Romania and Ukraine despite hurdles such as armed conflict, national rallies, and a shouting priest.

The Total Member Involvement (TMI) evangelistic meetings, many led by lay people, are being held in eight countries this month and next as part of a major evangelistic endeavor that church leaders hope will spread across Europe.

The first wave of two-week meetings will wrap up at 500 sites in Ukraine this weekend, while more than 1,300 sites in Romania will be entering their second week. Meetings also are being held at hundreds of sites in Armenia, Belarus, Bulgaria, Georgia, Moldova, and Russia. In all, meetings are to take place at more than 4,300 sites.

Adventist Church president Ted N.C. Wilson, who is leading meetings in Floresti near Romania’s capital, Bucharest, said he is thrilled with the high attendance in the predominantly Orthodox country.

“One conference leader said, ‘This is like a snowball, and it’s getting bigger and bigger,’” Wilson said after participating in a video conference call with Romanian church leaders. “There seems to be a very positive emphasis all around the union.”

He said he was especially excited that lay people are leading meetings at hundreds of sites.

“This is what TMI is all about,” he said.

TMI is a world church initiative that encourages every church member to share the gospel in their communities.

Among the Romanian speakers are two 12-year-old children, Wilson said.

Several Romanian pastors acknowledged in interviews that they had worried that nightly attendance would be low if meetings were held on weekdays. But sites across Romania have reported a strong turnout, including many guests.

“We were told that no one would come during the week,” said Duane McKey, the world church’s TMI coordinator. “They said there would be one or two guests. But some nights this week have been the largest so far.”

‘Model for All of Europe’

“Who would have ever thought that in one small country about the size of the Michigan Conference” — a church territory in the North American Division — “we would have over 2,000 evangelistic meetings,” McKey said. “Amazing! This is a model for all of Europe.”

Church leaders are paying special attention to how the meetings are being received in Romania, which has a highly secularized society like much of Europe. They view the country as a testing ground for expanding TMI meetings to the rest of the continent.

Most Romanian meetings opened amid some of the largest anti-government rallies in the country’s history. But the street demonstrations, which peaked at 500,000 people and weakened as the meetings picked up steam, have not affected attendance negatively, church leaders said.

Neither did a village priest who tried to disrupt a meeting at a rural church, said Ștefan Tomoiagă, president of the Adventist Church’s Romanian Union.

The priest, aged about 30, stood outside the church until 20 minutes before the meeting ended, screaming and telling non-church members not to enter, Tomoiagă said.

“The priest stood at the church’s gate until around 6:40 p.m. in a sign that even then people remained outside who wanted to enter,” he said in an e-mail to church leaders. “I invite you to pray especially for this church.”

Attendance is also a robust 50 to 60 inmates a night in a Romanian prison where Bruce Parrish, a retired employee of the U.S. prison system, is leading meetings.

“The meetings are going well but it is hard because the prison will not let me use my laptop,” Parrish said. “We have to use their computers.”

In Ukraine, presenters spoke about an outpouring of the Holy Spirit on their meetings.

U.S. citizen May-Ellen Colón said attendance is strong at the four sites where she is leading meetings in eastern Ukraine, which has been mired in conflict for the past two years and experienced renewed violence as the meetings began.

“More than 200 visitors, plus church members and children, are attending the meetings consistently at the four sites where I am working,” said Colón, director of Adventist Community Services International and an ADRA liaison.

She said at least half of her attendees have been displaced by the conflict.

“Some have lost all, and many are struggling and destitute,” she said.

In central Ukraine, Tiago Leao, a recently baptized young man from Brazil, said he spends all day preparing his presentations for evening meetings in Uman, a town of 87,000 people.

“The response of the church is fantastic,” Leao said. “This is the most amazing experience of my life.”

He was echoed by Arturo Gutierrez, a Mexican national who is leading meetings in Chernivtsi, a western city of 255,000 people.

“Last night I made a call for people to give their lives to Christ and 13 non-Adventists stood up,” he said. “Please pray for them to keep their decisions.”

The two men shared their experiences with Ramon Canals, who is coordinating the Ukrainian meetings and works as associate director of the Adventist world church’s Sabbath School and Personal Ministries department. Canals forwarded their e-mails to Adventist Mission.

“God is blessing His people all over this territory as the preachers stand up on the pulpits and preach the Word,” Canals said Thursday.

He said one of the Ukrainian sites has 140 guests nightly and 60 of them have already made decisions for baptism.

The evangelistic meetings, which started in Ukraine on Feb. 3 and are modeled after a major effort that resulted in 110,000 baptisms in Rwanda last year, are being held in waves across the eight European countries over the next few weeks. Another 500 meetings are planned for Ukraine after the first meetings conclude this weekend.

But church leaders said it was too early to estimate how many people would be baptized. In Romania, the first major baptisms are only expected in June so baptismal candidates will have sufficient time for Bible studies.

9 Ways to Bring God Into a Casual Conversation An Adventist business executive is looking to catch “hungry fish.”

"There We Rise" by Eric and Monique An original song by Eric and Monique. To hear more, visit them at https://www.ericandmonique.com The Deaf Evangelist Ministering to the deaf in Mexico, a missionary in Kyrgyzstan, and mission in London. Join us as we explore mission around the world. Serving from Mexico to Kyrgyzstan Elsie went almost as far away from home as possible to follow God's call to be a missionary. Her and her husband spent time serving the people in Kyrgyzstan and developed many close relationships. Ministry on Wheels Are you inspired to use a vehicle to take a ministry to those in need within your city? Visit the Mission to the Cities website for more stories on mobile centers of influence. How the Beirut Explosion Has Lead to Mission Mission Unusual Tokyo, the day Beirut exploded, and mission in America's pacific northwest. Join us as we explore mission around the world. Mission Unusual Tokyo A Pioneer Life for Me A Global Mission pioneer in Botswana tells his story.