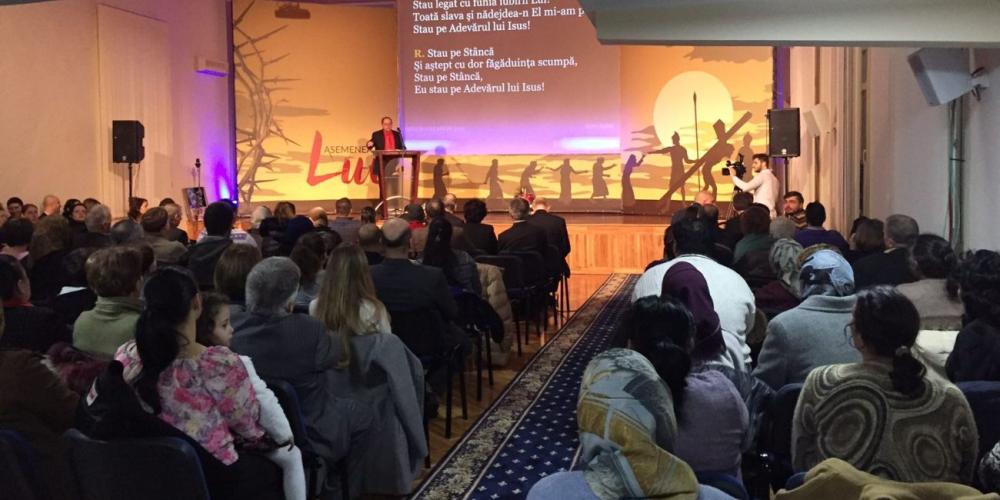 Over 2,600 People Prepare for Baptism in Romania

Adventists gear up for nationwide baptisms after evangelistic meetings in February.

More than 2,600 people are preparing for baptism in Romania following a major Seventh-day Adventist evangelistic campaign earlier this year, a church leader said.

A total of 2,667 people are participating in baptismal classes after attending evangelistic meetings organized at 2,003 sites across the East European country in February, said Ştefan Tomoiagă, president of the Romanian Union Conference. More than 70,000 people attended the meetings, including 32,000 visitors, and nationwide baptisms are scheduled for June 3.

“We are thankful to God for what He did, for what He is doing, and for what He will do!” Tomoiagă said by e-mail. “Through the guidance of the Holy Spirit, we are preparing for the national baptism on June 3.”

Evangelistic meetings were held in February and March at more than 4,300 sites in Romania and seven other countries of Eastern Europe and the former Soviet Union as part of Total Member Involvement (TMI), a world church initiative that encourages each of its 20 million members to find a way to share Jesus in their communities. The evangelistic meetings represented the culmination of months of prayer, cooking classes, health seminars, literature distribution, and other preparations.

Read about the Ukrainian meetings

Similar TMI evangelism resulted in more than 110,000 baptisms in Rwanda last year, and 73,000 people were baptized in Kenya in March 2017. Large campaigns are planned for Japan, Zambia, and other places in 2018.

Romania’s TMI outreach represented a litmus test for evangelism in Europe, which, like Romania, has a highly secularized society. Mario Brito, president of the Adventist Church’s Inter-European Division, whose territory stretches from Romania to Portugal, has called Romania’s outreach a success and said it would be expanded to other European countries.

On Tuesday, Adventist Church president Ted N.C. Wilson, who led an evangelistic series in Romania in February, encouraged Romanian church members to nurture those preparing for baptism and others who attended the meetings.

“We praise God for those who have decided to be baptized and also for those who will continue to make decisions toward baptism,” he said. “I hope the pastors and lay members will stay close to all those who had been coming so they will see a wonderful baptism on June 3. We will pray for a great harvest of souls on that Sabbath and beyond.”

In addition to the 2,667 people preparing for baptism, 2,147 others decided to keep in touch with the church through Bible studies and other activities after the evangelistic meetings, Tomoiagă said.

Romania has about 65,000 church members, the largest Adventist membership of any country in Europe.

Duane McKey, who oversees Total Member Involvement for the Adventist world church, said he was looking forward to witnessing the baptisms in person on June 3.

“God did amazing things in Romania,” he said.

When a Sunday Church Pastor Tried to Convert an Adventist Colporteur After she knocked on my door, I prayed, “Thank you, God! I was curious about Adventists, and you have brought one to me.”

Sabbath Fills a Female Pastor’s Emptiness Reading Ellen White books hurt my pride as a pastor, so I read them when my husband wasn’t home.