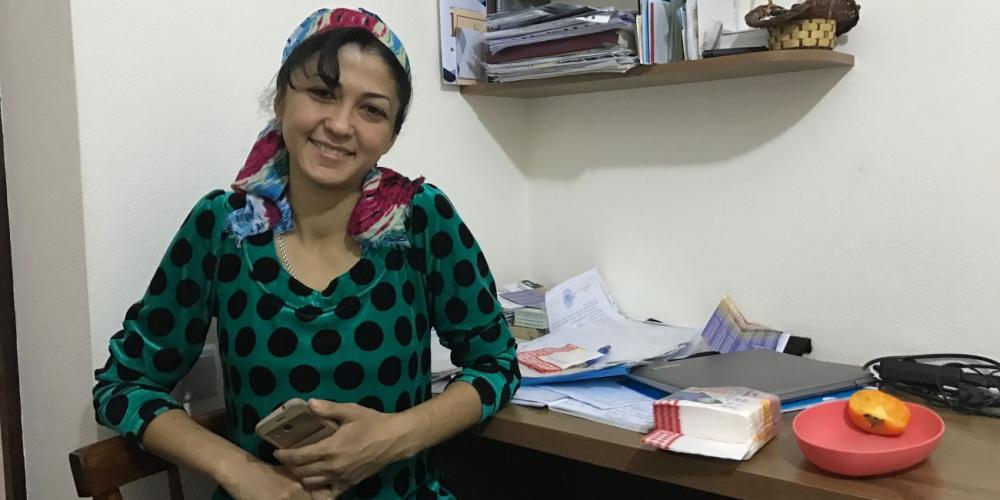 A woman’s path to Christ illustrates the miraculous work of providence in this Central Asian country.

Surayo Khudjamkulova, a 34-year-old native of the former Soviet republic of Tajikistan, first met a Seventh-day Adventist when she made a prank phone call in the 1990s.

But she struggled in her relationship with Jesus, attending an Adventist church for a while and then returning to the faith of her childhood.

A biblical encounter with God, followed by an attempt by her husband to kill her in a moonlit cemetery, ultimately led her back to the Adventist Church, where she is an active member today.

“Only God could have caused this to happen,” Khudjamkulova said in an interview this week in Tajikistan’s capital, Dushanbe.

Khudjamkulova’s path to Christ illustrates the miraculous work of providence in this predominantly Muslim country of 8 million people and only 204 Adventists that borders Afghanistan and China, church leaders said.

Khudjamkulova studied Arabic in the second grade. She remembers praying fervently at the age of 9 to be forgiven of her sins. By sixth grade, those prayers had morphed into pleas for God to forgive her parents’ sins. Khudjamkulova believed that her parents were to blame for the birth of a younger sister with cerebral palsy.

“Many Muslims believe that the problems of the children are the fault of the parents,” she said. “So in the sixth and seventh grades I prayed that my parents would be forgiven.”

“I thought: ‘If God is so kind, then why is all this happening? What did my parents do wrong?’” she said.

While in seventh grade, Khudjamkulova inadvertently befriended an Adventist church member while making prank phone calls one day. She and several friends looked up amusing-sounding surnames in the phone directory, called the phone numbers to crack jokes, and then hung up to laugh. After her friends left, one of the people whom they had called decided to return the phone call.

Khudjamkulova said she was surprised but quickly made a new friend. She and the Adventist man, Hojimurod, began to talk every day at 3 p.m. for an hour, and Hojimurod helped her with her homework. After a while, she learned that he was a Christian, and she began to ply him with questions.

“I asked him: “Why is my sister sick if God is good? Why does my innocent sister have to suffer for the sins of my parents?’” she said.

Then Khudjamkulova’s family moved to another city. A year later, in 1997, the family returned to Dushanbe, and Khudjamkulova, then 16, called Hojimurod again. He invited her to a Friday evening worship service.

“I really liked it,” Khudjamkulova said. “A women came to the front and sang about Jesus. I don’t know why, but I started to cry and cry. The song really touched my heart.”

Khudjamkulova worshipped with the Adventists regularly for two years. But she said the distractions of youth caused her to try out several other faiths over the next 13 years.

Khudjamkulova, meanwhile, trained to be a nurse, married at age 26, and moved to another city. But she was not happy. Her husband beat her regularly. He also used drugs and gambled.

During a moment of sadness, Khudjamkulova found a Bible that she had been given years earlier and opened it. Her eyes fell on Isaiah 5:4, which reads: “What more could have been done to My vineyard that I have not done in it? Why then, when I expected it to bring forth good grapes, did it bring forth wild grapes?” (NKJV).

Tears filled her eyes. She felt that she was the vineyard prepared by God but that she had failed Him. She prayed: “God, if I should stay with my husband, let him stopping beating me and make it possible for us to worship You together. If You want me to leave him, provide a way that is filled with peace. Then I will follow you.”

Shortly after the prayer, Khudjamkulova announced to her husband: “I love someone more than you. He is more than a person to me.”

The husband replied triumphantly, “I knew there was somebody else!”

“No, it’s not like that,” Khudjamkulova said. “I love Jesus, and I want you to love Him, too.”

“You have to love Mohammed,” the husband said. “He is our prophet. Jesus is not our prophet.”

“The issue is not about who is a prophet,” Khudjamkulova said. “Jesus is more than a prophet. He is our path to salvation.”

A few days later, the husband lost a sizeable amount of money in a betting game. He decided that it would be better to go to jail than to face the shame of not being able to pay the debt. So he decided to kill Khudjamkulova.

“He was not thinking straight because of the drugs,” Khudjamkulova said.

The husband invited Khudjamkulova to go for a midnight walk. The moon was so pretty that Khudjamkulova didn’t notice where they were walking. The next thing she knew, they were standing in a cemetery, and she felt something sharp and cold on her neck. Her husband was trying to slit her throat with a knife.

“I grabbed the knife and said: ‘Why are you trying to kill me? It’s not worth going to prison for me,’” she said.

As the couple struggled, slicing several of Khudjamkulova’s fingers to the bone, she prayed: “Lord, save me. Jesus, save me. Do everything possible to stop him.”

Then she lost consciousness. She awoke in her own bed a few hours later. Her husband had brought her home.

That morning Khudjamkulova told her husband that she could not live with him anymore. He did not resist, and the couple calmly parted ways. It had been a week since Khudjamkulova had promised to follow Jesus if He helped her get a peaceful divorce.

“I forgot my promise,” Khudjamkulova said.

She rented an apartment in Dushanbe and found a nursing job working the nightshift at a hospital. Then she remembered the promise that she had made to God. She began to pray: “If you want me to follow You, tell me which denomination to join. There are so many out there. Which is the real one where You are?”

One morning, Khudjamkulova accidentally got onto the wrong public bus as she left the hospital for her apartment. She didn’t realize her mistake until the bus reached the last stop, she said. As she looked around, trying to get her bearings, she saw an Adventist building right in front of her.

“I sat on the wrong bus, and it took me straight to where the Adventists were worshipping,” she said.

It was a Sabbath morning, and worship services were just starting. Khudjamkulova went inside — and she said her heart has never left.

A portion of the Thirteen Sabbath Offering in fourth quarter 2017 will go toward social outreach programs in Tajikistan, part of the Adventist Church's Euro-Asian Division.

Boy Grapples With Sabbath and Death — and Stays Faithful How a boy accepted Jesus and then clung to Him during a trial.

‘It’s Easier to Carry Cocaine Than Christian Books Across the Border’ How prayer helped me bring a box of books into a closed country.