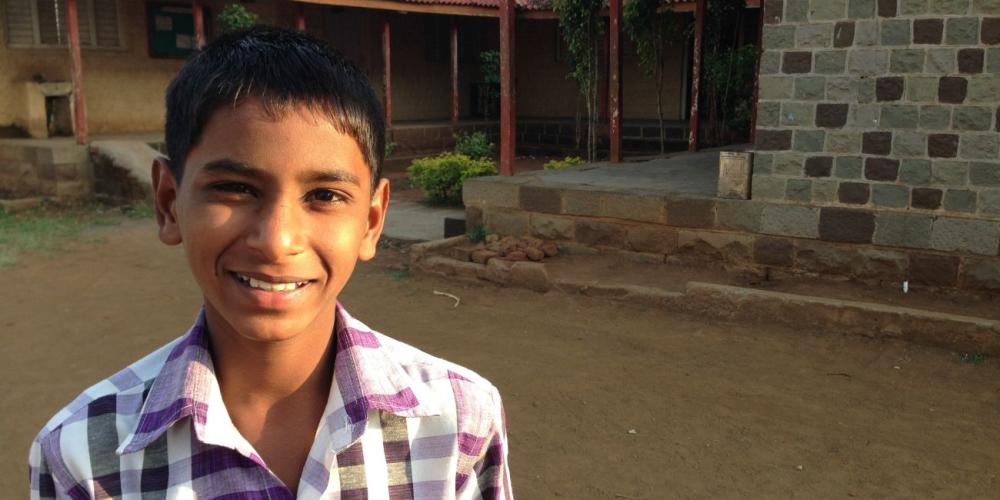 Students and parents tell how pastors have changed their lives.

When he was 10, Siyon Sudir Bhore saw a mini-controversy unfold weekly in his Christian home in western India.

A Seventh-day Adventist pastor would visit to study the Bible and pray with his parents. Then a pastor from another Christian denomination would stop by to read and pray, too.

This went on for some time in his home in Kavlapur, a village of about 1,500 people.

“Then the Adventist pastor told about the true Sabbath, and we were convinced,” said Siyon, now 13. “But we couldn’t decide who would tell the pastors about our decision.”

After joining the church, his parents had no qualms about announcing their next decision. When the pastor told them about Alate Seventh-day Adventist School, they told their son to pack his bags.

The boarding school, located near the town of Hatkanangale in the Indian state of Maharashtra, is about a 40-minute drive east of Siyon’s village.

Siyon only spoke the Marathi language and had to learn English, the language used by the school, when he enrolled in the third grade. But now in the fifth grade, the soft-spoken boy can speak, read, and write in English. He also has learned how to lead song services, prayer meetings, and Sabbath School.

Relatives and friends have taken notice back at home. When Siyon visits on vacation, they gather in his home and ask him to lead a prayer meeting. Many want to send their own children to the school, and several already have.

“They marvel at the way Adventist children take part in prayer meeting,” Siyon said, speaking in fluent English, in an interview at the Alate school. “Five children are now studying here because of me.”

Siyon is among 260 students, including 35 in dormitories, enrolled at this K-10 school. The school, which first opened in 1943 and reopened in 1981 after a 20-year closure, is recognized throughout the region for providing top-notch education. It plans to construct a new building with 14 classrooms, allowing it to expand and be more competitive, with the support of the 13th Sabbath Offering in third quarter 2017.

Alate’s students come from many walks of life. But many of the 10 children interviewed by Adventist Mission on a recent day had one thing in common: a life-changing encounter between their parents and an Adventist pastor.

Snehal Kamble’s mother became an Adventist after a pastor gave her Bible studies at home. Her father had died of alcohol abuse, and her mother had not known which direction to take in life. Five years later, the 15-year-old girl is studying in the eighth grade at Alate and is an active leader in Sabbath School and other worship programs.

“I started reading the Bible and taking an interest in church here,” Snehal said. “My spiritual life has grown, and I am happy to be here.”

Eleven-year-old David Admane also enrolled in the school through the influence of a pastor.

His father, Maruti Admane, a bricklayer, could not find a job or food for his family several months ago. Then a stranger appeared at his house door and dropped off a Christian leaflet.

“Dad began to read it out of curiosity,” David said.

Although he found the leaflet difficult to understand, he kept reading and shared the information with other family members.

A short time later he saw a group of well-dressed people looking at a construction site. He joined them, hoping to find work.

“He was surprised to recognize one man in the group as the man who had given him the leaflet,” David said. “Gathering up his courage, my father mentioned the leaflet to the man and told him he had been reading it. Then he asked for more information. The man introduced himself as an Adventist pastor and invited Father to study the Bible with him.”

Hs father studied the Bible with him and later asked for baptism. Later his wife joined him.

This is the first year for their son, David, to attend the school. A fifth grader, he acknowledged that learning English is challenging. But he enjoys his studies and especially likes playing Kho kho, a popular Indian tag sport.

The widowed mother of Abhishek Gaikwad, 11, called her son’s attendance at the school a miracle.

The mother, Rupali, said a drought left the family farm desolate several years ago. Not sure what to do, she waited, starving, at home for several days in hope of receiving help. During that time, a pastor showed up at the front door and offered to pray for the family.

“The pastor, like an angel, came to our house, even though I wasn’t sure that I wanted him to come in,” she said. “But the pastor came every day and something happened. We allowed him to enter and pray for us.”

Gaikwad believes that Holy Spirit arranged the pastor’s visits. Through the pastor’s assistance, she obtained food and, after Bible studies, joined the church.

A church scholarship allowed her son, Abhishek, to enter the Alate school two years ago.

“I have a good education, a good time playing, good food, and good friends,” he said.

He also has made a good impression on neighbors in his home village of Ingi, his mother said.

“Because of Abhishek’s Christian lifestyle, my community is interested in knowing about the church’s beliefs about the Sabbath,” she said. “I thank God for using us to witness for Him.”

A total of $1.03 million from the Thirteenth Sabbath Offering will be earmarked for five projects in India in third quarter 2017. The other four projects include a new girls’ dormitory at James Memorial Higher Secondary School in Prakasapuram in southern India; 14 new classrooms for an Adventist school in Vellarada in southern India; a girls’ dormitory at Nagaland Adventist School in Dimapur in Nagaland state; and the division’s first major conference center, situated in the central city of Ibrahimpatnam.

When a GYC Volunteer Came to My House Little did I know that I would become a GYC volunteer a year later.

Urban Centers When it comes to mission and the Adventist church, do numbers tell a story? Let's explore it together on today's episode of Mission 360º.

A Mighty Movement The church pastor of another denomination finds a Voice of Prophecy bible study. He eagerly studies it and decides to share a new-found truth with his church. The result? Many were baptized into the Seventh-day Adventist Church. Mission Offerings: Watering the World The church's system of regular and systematic offerings is just like a river. Every time we give our mission offerings, we're adding water to a life-giving river that flows through often parched lands, bringing life and hope. She Didn't Want to Become a Christian Yoriko participates in the Youth Rush program to knock on doors, sell books and give Bible studies. What is a Missionary The Butterfly Church in Taiwan, a mobile clinic in Mexico, and the answer to the question: What is a missionary? What a Missionary Is Do you know what a missionary is? Karen didn't think she was one or could ever be. Mission Unusual Tokyo A Pioneer Life for Me A Global Mission pioneer in Botswana tells his story.