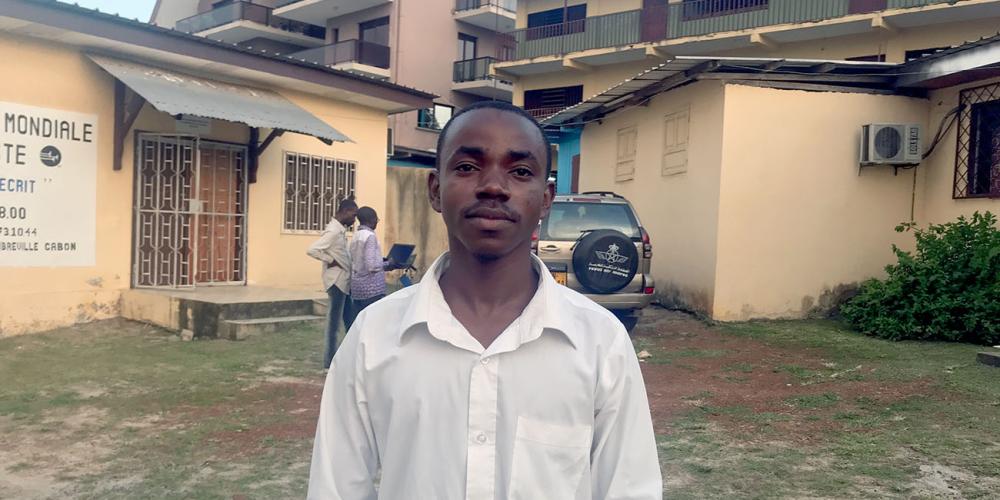 Student Leads Many to Baptism in Gabon

It all started when he spoke to a classmate about Jesus.

Rorive Vinga introduced a friend to Christ when he was only a boy.

Father, a soldier in the Gabonese military, was stationed in the eastern city of Koulamoutou. So, Rorive moved into a new home there with his parents and four younger brothers and sisters.

But they had a problem. There were no other Seventh-day Adventists in the city. There was a church, but it had been closed for many years because no one worshipped there anymore. The building was old and falling apart.

Father called Rorive and the rest of the family to repair the church.

“We will worship God on Sabbaths in the church even if we are the only Adventists in the city,” Father said.

The family worked hard to repair the church, and soon they worshipped there every Sabbath, every Wednesday for prayer meeting, and every Friday for sundown worship.

One Friday evening, Rorive arrived at the church for sundown worship with Father, Mother, his little sister, and three little brothers. To his surprise, he saw Glen standing outside the church.

“What are you doing here?” Rorive asked.

“I live next door,” Glen said.

Glen couldn’t come to church that day, but he promised to visit another time. Two weeks later he showed up for a Sabbath service worship, and he liked it.

“This church is different,” he said.

Several months later, Glen gave his life to Christ and was baptized. After that, he invited his whole family to church, and they also were baptized.

Glen told Rorive that he had been praying for God to lead him to the right church when Rorive’s family moved to the city.

“I never realized that the right church was located right beside my house!” he said.

Rorive was happy that Glen and his family had given their hearts to Jesus. As time passed, more and more people worshipped in the church on Sabbaths.

Rorive grew up and moved to Gabon’s capital, Libreville, to go to the university. He made new friends and became active in Samarie Seventh-day Adventist Church. But he noticed that the church was located in a bad neighborhood. Many young people his age used drugs and drank alcohol around the church. Some were thieves, and they broke into the church several times.

One day, Rorive wondered, “Can God change these people?” He doubted it and thought, “No, they are lost.”

The thief was surprised to find his hand empty, and Rorive smiled at him.

“Silver and gold I do not have, but what I do have I give you,” he said.

Then he told the young man about Jesus.

Rorive is thrilled that God has used him to lead people to baptism. He has an important question to ask everyone who goes to church on Sabbath.

Rorive Vinga asks, “If God used me, why can’t He use you?” (Andrew McChesney / Adventist Mission)

The Property Mafia Property mafia tried to take away the sight of a Global Mission pioneer's church plant, Adventists cycle for health in Puerto Rico, and a school for native people in Alberta, Canada.