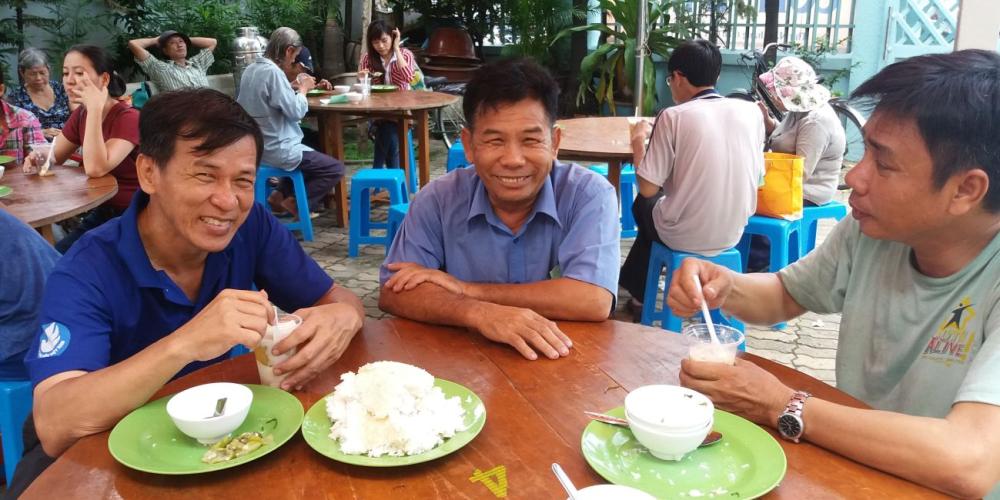 A Mission to the Cities project slated to end in 2014 finds a new lease on life.

Seventh-day Adventist leaders in Vietnam faced a dilemma in 2014 when a year-long Mission to the Cities evangelistic campaign ended and they had some leftover funds.

World church president Ted N.C. Wilson, who baptized 35 people in Ho Chi Minh City during the campaign, suggested that the money be used to help the needy.

The result: a free weekly meal that is so well known that every taxi driver in Ho Chi Minh City, a city of 8.5 million people, is aware of it, church leaders said. Three people who came for meals have been baptized.

“Our meal program is having a great impact on the community,” the Adventist Church’s Vietnam Mission said in a statement. “These days, if you hail a taxi and ask for the Phu Nhuan Community Meal, every local driver will know where to go.”

“This is an effective and practical activity that provides food, hospitality, and the love of God for people of all ages, means, and needs,” the Vietnam Mission said. “We work hard to provide a welcoming place where people can enjoy healthy meals served with dignity and respect.”

In recent weeks, the church has run out of food because it has not been able to keep up with the growing crowd.

“The church members are very excited and are regular volunteers in this project,” said Jannie Bekker, who visited Vietnam last week in his role as assistant to the president of the Adventist Church’s Southeast Asia Union Mission, whose territory includes Vietnam. “Non-Adventist students from the university also come and help.”

Ho Chi Minh City authorities have welcomed the charity work at the Phu Nhuan Seventh-day Adventist Church (also known as the Center Vietnamese Adventist Church) and its impact on the community.

Vietnamese church leaders expressed joy that the meals are meeting a local need — and pointing people to Jesus.

“Why do we exist? With the purpose of introducing people to Jesus Christ and welcoming them into the life of the church,” said the Vietnam Mission statement. “We give them invitation cards to our church events such as evangelistic meetings and Parents Day. Through this community service, three people have taken Bible studies and been baptized at the Phu Nhuan church.”

The Adventist Church, which only received government permission to resume its work in 2008, has 12,000 members and 15 churches in Vietnam, according to the latest figures from the world church’s Office of Archives, Statistics, and Research. About 80 percent of the Southeast Asian country’s population of 93 million are not affiliated with any religion, while 10 percent are Buddhist and less than 1 percent are Protestant.

The 2014 evangelistic campaign was part of a church initiative called Mission to the Cities, which seeks to spread the gospel in the world’s biggest cities. In April 2014, at the end of the campaign, Wilson spoke for three days at reaping evangelistic meetings at the Phu Nhuan church. His visit was the first by an Adventist Church president to Vietnam, and it marked the first time that a foreigner was permitted to speak at an Adventist evangelistic meeting there since 1975.

“Praise God for the souls who have been touched and won by following Christ’s method of reaching people!” he said by e-mail.

Christ’s method is summarized in Matthew 9:35-38, which says, “Then Jesus went about all the cities and villages, teaching in their synagogues, preaching the gospel of the kingdom, and healing every sickness and every disease among the people. But when He saw the multitudes, He was moved with compassion for them, because they were weary and scattered, like sheep having no shepherd. Then He said to His disciples, ‘The harvest truly is plentiful, but the laborers are few. Therefore pray the Lord of the harvest to send out laborers into His harvest’” (NKJV).

This is an example for working the cities that should be remembered by every Adventist, said E. Douglas Venn, who oversees the Mission to the Cities initiative as director of Global Mission’s Urban Centers at the headquarters of the Adventist world church.

“Working together, everyone can make a meaningful contribution through their engagement to ongoing city work,” Venn said.

In Vietnam, church leaders said the meals program was especially motivated by Matthew 25:35, where Jesus said, “For I was hungry and you gave Me food; I was thirsty and you gave Me drink; I was a stranger and you took Me in.”

“When you feed others, you are feeding Christ,” they said. “We are so thankful that God has many ways to call His lost souls.”

Scary Dream Teaches Japanese Student About God’s Forgiveness I saw my father lying on the floor. His face was very white, as if he were close to death.

Lives Changed Historically we have been a rural church but today we need to find new and creative holistic ways to reach the many diverse peoples in cities.