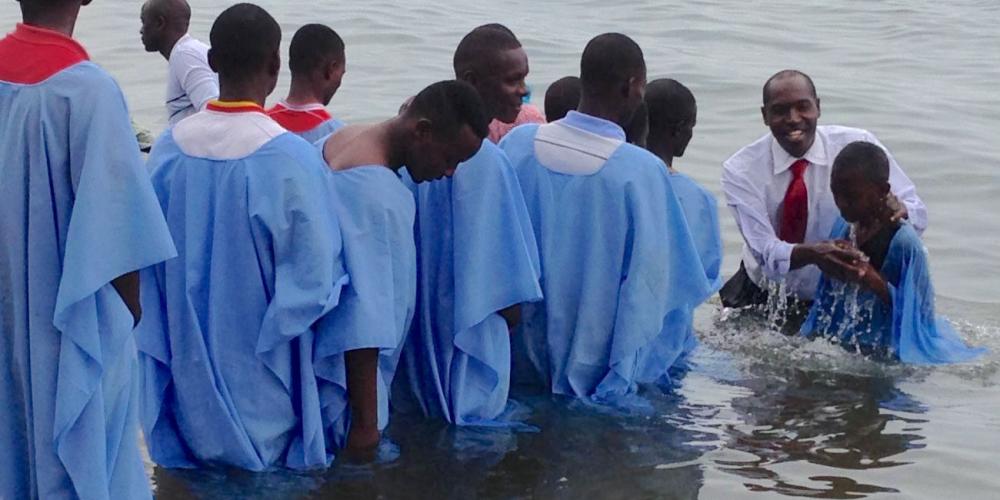 A record number of people join the church, as local churches are planted rapidly to nurture new members.


A major drive to engage every church member in Total Member Involvement has helped propel the Seventh-day Adventist Church past 20 million members for the first time in its history.

In another milestone, a record 1.2 million people were baptized last year, including an unprecedented 110,000 in Rwanda, while new churches continued to be planted at a rapid rate.

“What these statistics tell me about the church’s efforts to fulfill its mission is that church leaders and, increasingly, church members are putting considerable resources into reaching new souls for God’s kingdom,” said David Trim, director of the Office of Archives, Statistics, and Research. “Total Member Involvement has a huge role to play here, and the record baptisms in 2016 already reflect TMI.”

Total Member Involvement (TMI), implemented in its first full year in 2016, is a world church initiative that encourages every church member to actively share the gospel in his or her community. Outreach efforts include literature distribution, Bible studies, cooking classes, health seminars, free clinics, and public evangelistic meetings.

“The engagement of lay people in Total Member Involvement is so important to what we are seeing happen in the world church,” Wilson said.

“The Holy Spirit is leading our church members to be so actively involved in every aspect of personal and public witness,” he said by e-mail. “Let us never forget the counsel given to us in ‘Testimonies for the Church, Vol. 9,’ page 117: ‘The work of God in this earth can never be finished until the men and women comprising our church membership rally to the work and unite their efforts with those of ministers and church officers.’”

Duane McKey, TMI coordinator for the world church, said the membership growth is “clearly an indication that TMI is blessed by God.”

“When the whole church is mobilized like in Rwanda, when every member is doing something, God is there and God will bless,” McKey said. “This truly is an illustration as to how the work can be finished!”

The Adventist Church, which is organized into 13 world divisions and two attached fields, saw the highest growth in the East-Central Africa Division, with 338,638 new members (334,571 baptisms and 4,067 professions of faith) for a total reported membership of 3,502,462. The division’s territory includes Rwanda, where 110,476 people were baptized after months of prayer and other TMI efforts culminated in evangelistic meetings at more than 2,000 sites in May 2016.

“Never before had this kind of involvement been seen,” Ruguri said. “This unusual phenomenon brought an unusual awakening in the whole country.”

“In the East-Central Africa Division, we believe what happened in Rwanda in 2016 is just the beginning of greater things to come,” he said. “We are planning bigger campaigns this year and hope by God's grace to see even bigger results.”

Last year, the Southern Africa-Indian Ocean Division had the second-highest growth with 276,601 new members, bringing its official membership to 3,747,573.

“The statistics show that Global Mission’s focus on church planting is bearing fruit,” said Gary Krause, director of the world church’s Office of Adventist Mission. “I would say that church planting continues to be at least a major factor if not the major factor in powering sustained growth as new believers are nurtured in fellowship as growing disciples.”

Worldwide, the Adventist Church has 154,710 congregations, which include local churches, companies, and groups.

World church leaders rejoiced about the church’s rapid growth, but they also underscored that efforts must be made to nurture new members.

“We must remember that retention and nurture are the other side of the same coin as evangelism,” said G.T. Ng, executive secretary of the world church.

“All heaven rejoices when just one person comes home to the Father,” he said. “Let’s join heaven’s celebration and praise God for these precious people. As a church, we now have the awesome responsibility to care for them, and to help nurture and grow them as committed disciples who, in turn, will share their new faith with others.”

While robust membership growth was reported last year, 352,722 members were deducted because of dropped membership or being registered as missing in church membership audits, Trim said. He noted that this is the lowest deduction since 2006.

“It would be wonderful if we could think the program of audits had now picked up all the members who have left the church and deducted them from official records,” he said. “But we know with great certainty from a number of sources that that’s not the case.”

He said an average of 584,000 people were deducted annually over the past 10 years, and if the same number had been deducted in 2016, overall membership would not have reached 20 million.

“The spiritual lesson here is that we shouldn’t be so blinded by numbers that we seek only to add, that we only baptize and don’t nurture new members into a live of active discipleship,” he said.

“However, all these borne in mind, we can still praise God for passing the important milestone of 20 million in our reported membership and praise God even more for the more than 1.3 million people who united themselves with God’s remnant church in 2016,” he said. “Now we need to make sure we retain them all so that they are in the kingdom at the last judgment.”

Evangelist Interrupted My Big Soccer Match A Romanian speaks about his faith, cystic fibrosis, and a remarkable dream.

When a Georgian Businessman Gave $15,000 to Dishonest Relatives Upset, he asks, “Is it worth doing good if this is the result?”