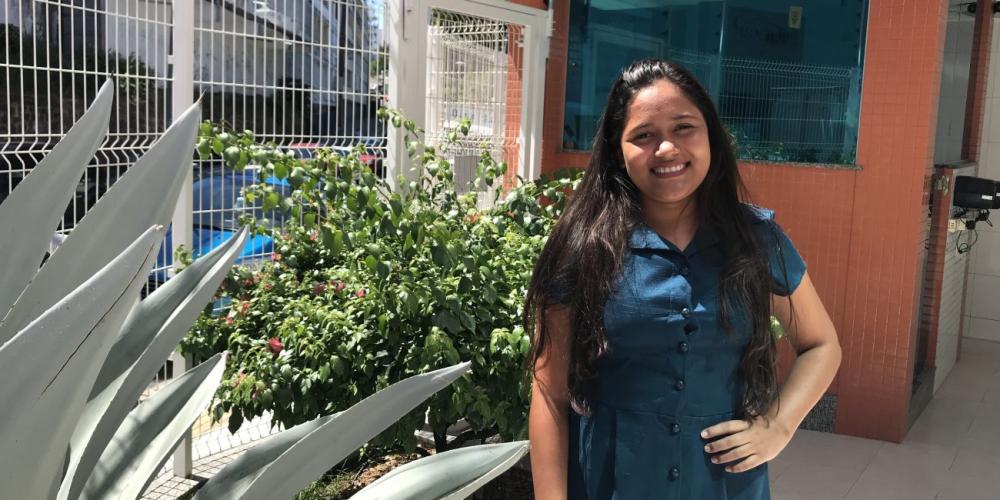 He led me to the Adventist Church and then asked me to be his wife.

By Grecielly Moraes Nascimento, as told to Andrew McChesney

My mother and stepfather argued constantly in our home in Aracaju, Brazil.

The arguments seemed to grow worse over time, and my childhood was filled with yelling and chaos. I grew up without God and never went to church.

One day when I was 18, a kindly aunt came to visit, and she was shocked by what she saw.

“Your family is really beautiful, but you lack God,” she said. “Let’s go to church. We will enter the first church that we find.”

We left the house by foot: my mother, stepfather, younger sister, a half-sister and a half-brother, and me. The first church that we passed belonged to the Seventh-day Adventist Church, and we went inside. Several young people were conducting an evangelistic series and, afterward, they came to our home to give Bible studies.

I was in school at the time and missed the Bible studies. But my mother and siblings participated, and we all began attending church.

Peace filled our home — for a short time. But then my parents resumed their arguing, and the fighting grew worse than before.

One day my mother couldn’t take it anymore, and she left. After that, we stopped attending church. I didn’t want to leave my young half-siblings, so I stayed with my stepfather.

Several months passed, and the telephone rang one evening. A 26-year-old businessman named Rafael said he was looking for a secretary and asked if I wanted the job. He had visited my school that day and asked the principal for recommendations, and my 12-year-old half-brother had overheard the conversation and recommended me.

I accepted the job.

Soon I noticed that my new boss didn’t act like other bosses. He prayed before work. He didn’t eat certain foods. One day, I was riding in his car and he turned on music that I had heard in the Adventist church. I began to sing along with the song in the car. Rafael heard me and asked, “Do you know the Adventist Church?”

I nodded my head.

Rafael said he was an Adventist and invited me to go to church with him. I refused, but he kept insisting, so I finally went one Sabbath. Then I went a second Sabbath and a third Sabbath. After that, I couldn’t stop going. I loved worshipping God in the Adventist church, and I began taking Bible studies. When I learned about tithe, I immediately started returning 10 percent of my income to God.

I was baptized in February 2017. My 12-year-old half-brother, Jenivaldo, was baptized a few months later. My sisters saw that I was praying and my behavior had changed. My clothes were not the same as before, and I spoke differently. Both sisters — Yasmim, 18, and my 15-year-old half-sister, Evelim — were baptized together.

Five months after my baptism, Rafael proposed to me, and I accepted. We are now constructing a new home and will get married after it is finished.

I am praying for my parents to find God.

But my siblings and I are strong in God. Our lives have changed completely. The way we speak, our friendships, our clothes — everything. I serve in the children’s and music departments in my church, while my sisters work in the church reception. My brother is too young to hold a position in the church, but he is a Pathfinder.

Part of the Thirteenth Sabbath Offering for second quarter 2019 will help Grecielly Moraes Nascimento’s church acquire a new building so it will have space for all the people who worship on Sabbaths. Thank you for your mission offerings.

Mysterious ​Guards in White Robes East Timor villagers planned to badly beat the Pathfinders and perhaps even kill them.

April 14 - The Butterfly Who Found Jesus Shaneek found Jesus when she really needed Him thanks to teachers at her Adventist Native school in Canada. Now she spends every day in His Word.