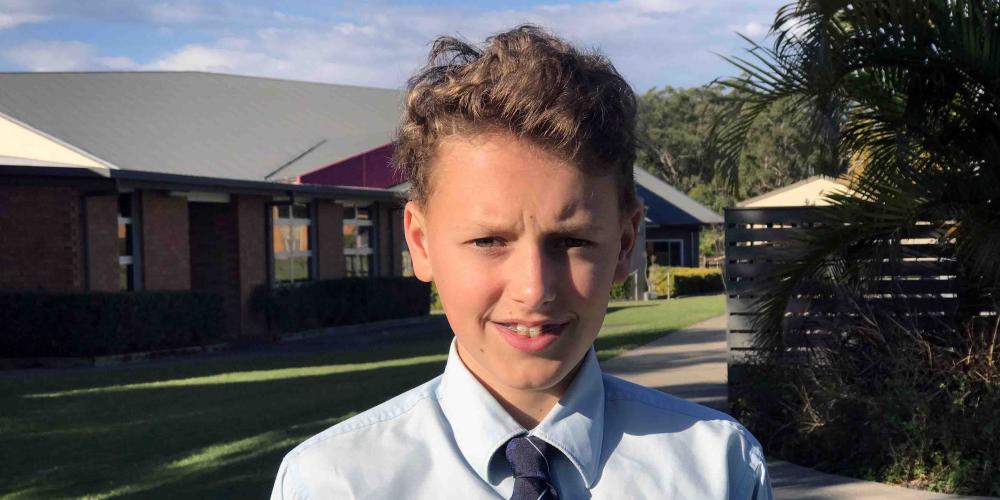 Jaxon Stacey didn’t pray much before Cambodia, but now everything has changed.

Thirteen-year-old Jaxon Stacey gathered with his parents and three younger brothers in the living room for “Family Night.”

It actually wasn’t nighttime. It was only 4 p.m., and the boys had just returned home for school. The Stacey family had a tradition to meet for 20 minutes every day to discuss what had happened at school and to make plans for the future.

At this “Family Night,” Mother wanted to talk about family plans to travel far from home in Australia for a three-week summer vacation in Cambodia. Jaxon was looking forward to going to Cambodia. He hoped to see old Buddhist temples and eat fresh pineapples and papaya. But Mother didn’t want to talk about that. She wanted to change the vacation plans.

“Today, I was talking with a woman from church, and she suggested that we build a school classroom during our vacation,” Mother said.

Mother explained that the 10th-grade students at the school needed a classroom, so she wanted her family and another Australian family to team up to construct the building. The project would take a week of their three-week vacation.

Mother said each member of the family would have a task. Jaxon’s brothers would hammer nails and paint walls. Jaxon and Father would saw wood for the walls.

Jaxon wasn’t sure he could do it. He thought, “I’m not very good at cutting wood, but I’ll try it.”

Mother said Jaxon and his three brothers each also needed to raise 1,000 Australian dollars (U.S.$740) to pay for project expenses.

Jaxon and his brothers got to work. For several Sundays, they shut themselves in the kitchen, baking cottage cheese patties, quiche, muffins, and puff pastry stuffed with vegetarian sausages. They advertised the food on Facebook. After each all-day cooking marathon, Jaxon dropped into bed exhausted and quickly fell asleep.

Neighbors and church members were supportive of the boys’ desire to raise money for the trip, and the food sold easily.

Soon Jaxon and his brothers had raised the money, and they flew to Cambodia.

The family spent the first week exploring the country. They visited the ancient Angkor temple in Siem Reap and ate fresh pineapples and papaya.

Then the family got into a minibus and rode several hours to the school. There, they and two other Australian families began to work on the classroom.

Jaxon quickly noticed something different. Every morning, the group prayed for God to keep them safe as they worked and to help them finish the project. During the day, the group paused from work to pray for more help and protection. Every evening, prayers of thanksgiving were given to God for safety and the work that had been accomplished. The group also prayed before every meal.

Jaxon had never prayed so much in his life. At home, he didn’t pray when he got up in the morning or when he went to bed at night. He often forgot to pray at meals. He liked the many prayers in Cambodia.

Jaxon was exhausted after work every day. He took a nap, woke up for supper, and then went straight back to bed for the night.

When the week ended, the classroom was finished. Jaxon was delighted! God had answered their prayers — they finished on time, and no one was injured.

“When we finished, we felt like we had achieved something very big,” Jaxon said. “We felt really good.”

For the last week in Cambodia, Jaxon went to the beach to swim and relax with his family.

Jaxon is now 14 and back at Avondale School in Australia, studying in the eighth grade. But something is different. When he wakes up in the morning, he thanks God for the new day and asks for protection. At school, he pauses to ask God for help with his schoolwork. When he lies down to sleep, he thanks God for the good day and asks for a good night’s rest. He also prays before every meal.

Jaxon said the Cambodia trip taught him about the importance of prayer.

“I pray now more than I used to,” he said. “I didn’t used to pray in the morning, but now I do, and I pray at night as well and sometimes through the day. I see that God is answering my prayers. I asked for help before a math exam, and I did pretty good!”

Australian schoolboy Jaxon Stacey says he has decided to pray a lot more after a mission trip to Cambodia. (Andrew McChesney / Adventist Mission)

August 11 - The Book I Read In 20 Years After 20 years, Benson finally finished reading a book that he believes is full of truth. He struggled with but eventually found freedom through the printed word.

​Saved by the Poke of a Finger Catherine poked Father in the arm. Father drank every Sunday.