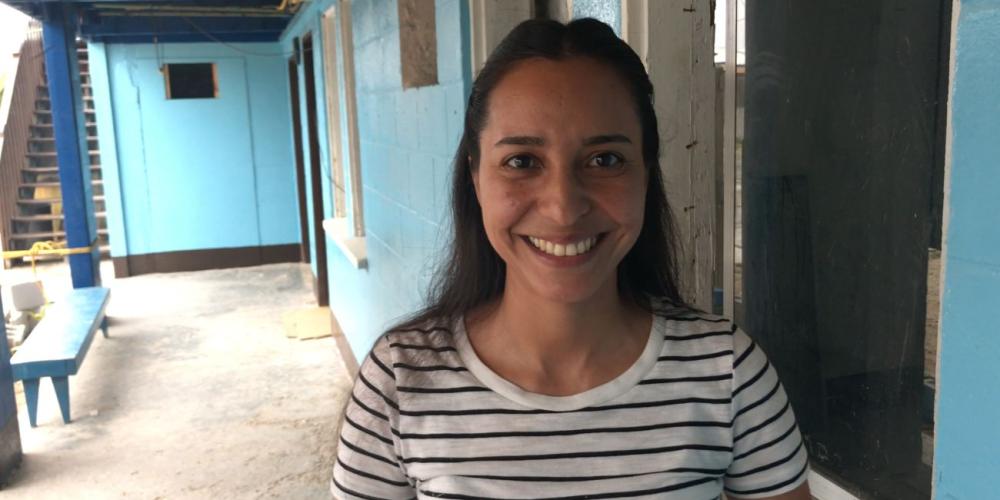 Mexican Gives Up Promising Career to Teach on Pacific Island

Nerly Macias struggled to reach Ebeye, but she is overjoyed with the baptism of five children.

By Nerly Macias Figueroa, as told to Andrew McChesney, adventistmission.org


Inspired by reading mission stories, I resolved at the age of 17 that I would leave my home in the Mexican state of Chiapas one day and become a missionary.

I remembered my desire to go to the mission field after graduating from the university, but I didn’t have any money. Walking home one night, I prayed, “Lord, I want to be a missionary and serve You, but I can’t buy the airplane ticket and my family can’t help me financially. If You want me to be a missionary, just give me a job, and I will go.”

Two days later, I received a telephone call from Southeast Adventist Hospital in the Mexican state of Tabasco.

“We have a job for you,” the man said. “Just come for the interview.”

The hospital hired me as its head dietitian, responsible for planning all meals. It was an incredible answer to prayer, and I thought, “This job will allow me to save money to become a missionary.”

A year later, I filled out a job application on the website of Adventist Volunteer Service. My dream job was to work at Bogenhofen Senior High School in Austria because I had studied German and wanted to practice the language. When they didn’t accept me as a kitchen assistant, I cried a lot.

My second choice was to go to Ebeye Seventh-day Adventist School in the Marshall Islands. The school principal accepted my application.

I prayed, “God, they didn’t accept me in Austria, but Ebeye accepted me. Maybe they need help. Help me to go to Ebeye.”

Three days before buying the air ticket, my uncle died. He had several outstanding financial matters, and my family didn’t have the money to cover them. So, I handed over my savings.

I called the Ebeye principal and explained that I didn’t have the funds to come. He was understanding.

That night, I prayed, “God, if You gave me this dream of becoming a missionary, why can’t I go? I’m working for You at the hospital, but I want to go abroad.”

A year passed, and again I saved up enough money to go to Ebeye. But then my sister was badly injured in an accident, and I gave my savings to her. Again, I explained to the Ebeye principal that I couldn’t come.

Two years passed, and I set aside my mission dreams. I had a good job and was earning good money. Then one night, as I was lying in bed and making plans to buy a car and a house, I remembered Ebeye.

I thought about the island for a week. I remembered promising God to become a missionary, but I argued with Him, saying, “I’m working at an Adventist hospital, so I’m doing Your work. Why should I leave my job and go to another country?”

As I listened for an answer, all I could think was, “Ebeye, Ebeye, Ebeye.”

The cheapest route to Ebeye from Mexico is to fly through Los Angeles, California, and Honolulu, Hawaii. For that, I needed a U.S. visa. Other routes to Ebeye went around the world and cost too much.

I called the Ebeye principal and asked for letter to take to the U.S. Embassy.

Shortly before the embassy interview, I said, “God, I really don’t want to go as missionary because I have a good life now. I wished to go before, but not anymore. Please don’t give me the visa.”

At the embassy, the consular officer asked, “Why do you want a visa?”

“Because I’m going to be a missionary on Ebeye Island in the Marshall Islands,” I replied.

The officer looked at his computer screen. He didn’t ask for the paper from the school principal, and he didn’t request any bank account information. He just looked at his screen.

“OK,” he said finally. “You will have your visa in one month.”

With those words, I realized that God was opening the door for me to go and I needed to keep my promise to Him. So, I gave up everything — my job and my life in Mexico. I said goodbye to my family and moved to an island of 12,000 people living on 80 acres (32 hectares) of land to the middle of the Pacific Ocean.

After a year in Ebeye, I have no regrets. When I started teaching the fifth grade, only one child in the classroom was from an Adventist family. Through the assistance of a friend in Hawaii, I gave Bibles to all my students for Christmas. Five of my students were baptized during the school year!

Some people ask me, “Why did you leave your job in Mexico? You don’t have anything now.”

I reply, “I have everything. I am happy here, and I know God has a plan.”

What amazes me is that I tried to come to Ebeye for four years but only arrived in 2016. I think it is because God had a plan. I don’t know what the plan is, but I know He has one and He will reveal it at the perfect time.

Nerly Macias Figueroa says she has no doubt that God will provide when she follow’s His leading. (Andrew McChesney / Adventist Mission)

Raian G. Villacruel, principal of Ebeye Seventh-day Adventist School, has no doubt why Nerly arrived when she did. Her classroom had more baptisms than any other this past school year! Part of the Thirteenth Sabbath Offering in second quarter 2018 will help Ebeye school carry out major repairs on crumbling classrooms. Thank you for your mission offerings.

Picture Story - Middle East Eman was furious when Refaat first accepted the Advent message and quit his job to focus on sharing it with others.