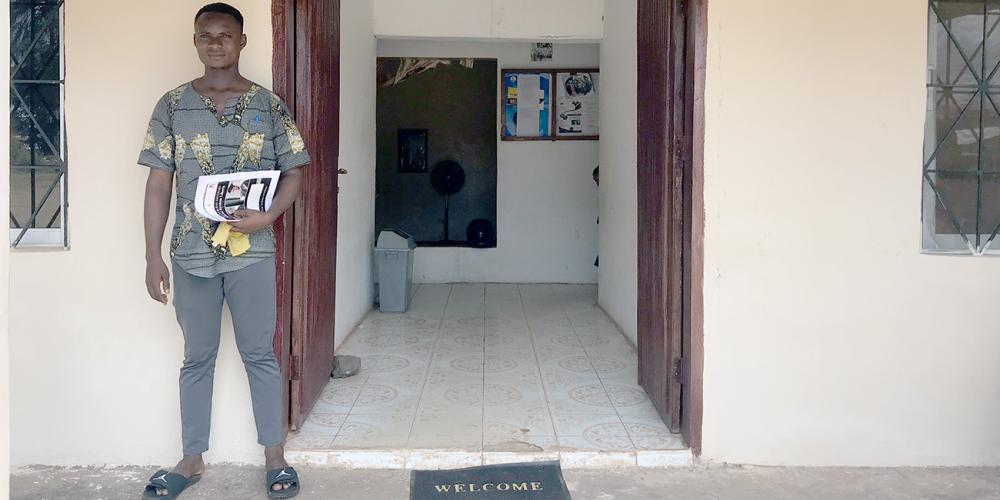 Nine-year-old Wilmot Redd woke up to see that his feet and legs were gigantic.

His feet and legs had doubled in size since he went to bed the night before in a village in the West African country of Liberia.

“No, nothing hurts,” the boy said. “Just my feet are really big. I can’t wear pants or shoes.”

Father thought the swelling might go down on its own, and he suggested that they wait a few days. But after a week, Wilmot’s feet were bigger than ever. Father called the hospital. An ambulance arrived with lights flashing and siren shrieking. The trip to the hospital took 30 minutes.

At the hospital, a physician ran tests but couldn’t find anything wrong. Leaving Wilmot at the hospital, Father returned to the village to find Nakontee, an old woman who prayed for people for money. Nakontee told Father to give her U.S.$30 for a bar of soap, a towel, and a jar of olive oil. “When the boy comes home, he should use the soap whenever he takes a bath or washes his hands,” she said. “He should use the towel to dry himself. After baths, rub his body with the olive oil.”

Then the woman prayed for Wilmot. When she finished, she told Father to forget the soap, towel, and olive oil.

“I just had a vision,” she said. “The soap, towel, and olive oil won’t help the boy. He has been cursed by someone who lives near here, so you must take him far away. That is the only way that he will be cured.”

Father left the soap and other items at home and returned to the hospital. Hailing a taxi, he took Wilmot to an uncle’s house far away. He wanted the boy to be safe from the curse.

In the new city, Father took Wilmot to another hospital. A physician declared that Wilmot had a kidney infection. After two weeks of treatment, Wilmot’s feet and legs returned to their normal size, and the boy was released from the hospital. But Father still believed that he had been cursed and only recovered because they had traveled far away from home. Father made arrangements for Wilmot to live with his uncle.

After four years, when Wilmot was 13, Father moved to another town and sent for his son. He enrolled the boy in the local Seventh-day Adventist school.

At the school, Wilmot learned that God does not require money to answer prayers. He loved God and wanted to show his love by keeping the seventh-day Sabbath. He was baptized.

Father worshipped on Sunday, and he was upset about Wilmot’s new beliefs. Saturday was a busy day for the family, and Wilmot no longer helped wash clothes or clean the yard on that day. Father sometimes punished Wilmot by forcing him go hungry all day on Sabbaths.

Wilmot tried to talk to his father about the Sabbath, but Father refused to listen. Wilmot prayed every day for God to soften Father’s heart.

One evening during family worship, Wilmot asked Father to show him where the Bible said that Christians should worship on Sunday. Father opened his Bible and looked for a text. He couldn’t find any. Then Wilmot turned in his Bible to Luke 4:16 and gave the book to Father.

Silently, he prayed for God to soften Father’s heart.

Father read that Jesus went to church every Sabbath. The verse said, “And as His custom was, He went to the synagogue on the Sabbath day.” Father looked up with shock.

“I didn’t realize that Jesus worshipped every Sabbath,” he said. “Son, I’m sorry for treating you unkindly.”

Wilmot never again had any trouble on Sabbath. He is praying for his Father to become a Seventh-day Adventist. But he has never gone to the prayer woman. He goes directly to God.

“I pray to the heavenly Father,” he said. “I put everything into His hands.”

Wilmot Redd says he doesn’t need a prayer woman to pray for him. He can pray directly to God. (Andrew McChesney / Adventist Mission)

No Birthday Cake When Juliana's birthday came around, she didn't want a birthday cake, she wanted to feed the homeless. When her mother resisted, Juliana found a way to overcome all obstacles and be an example for Jesus.

​Stopped at the Airport I heard the only question that will be asked on Judgment Day.