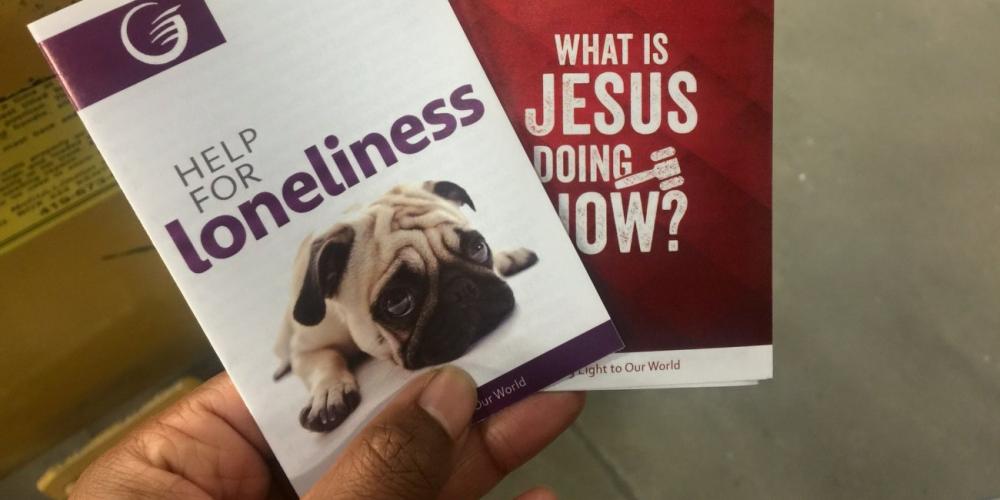 What happened when two ministers distributed tracts in Texas.

Liz was busy working in her home in Houston, Texas, when suddenly something told her to be still for a moment. Just then, she heard a knock at the door.

When she opened the door, however, she didn’t see anyone. David Pano had already left her porch and was swiftly walking to the next house. Seeing his retreating figure, Liz called out to let him know she was there. David heard her call and returned to her home.

He smiled and handed her a GLOW tract.

“Is this from the Jehovah’s Witnesses?” she asked.

Suddenly, Liz exclaimed, “I have chills right now! Not too long ago I had a dream. In the dream, I saw two ministers of the gospel coming to my house sharing literature. And I knew that they were not Jehovah’s Witnesses.”

David, a minister who works as assistant ministries director at the Seventh-day Adventist Church’s Michigan Conference, was thrilled to hear about her dream. The only problem with its fulfillment, he quietly pondered, was that he was there by himself.

Just then, Taylor Hinkle, his ministry partner on that street, arrived. Taylor, a chaplain and Bible teacher at Great Lakes Adventist Academy in Michigan, had run out of GLOW tracts on his side of the street, so he had come to David to get some more tracts. There were now two ministers of the gospel at her door!

Liz looked at David and Taylor.

“I believe that this is from God,” she said. “In my dream, I saw two ministers at my door bringing hope to me. And I heard a voice from heaven, saying, ‘This is your last chance. I’m coming back soon!’

The two young ministers, who were going door to door with other young adults during GYC’s annual convention in Houston on Dec. 30, 2016, gladly prayed for her. Liz signed up to take Bible studies with a local church.

God sends His people as ministers of hope into this dark and gloomy world to introduce souls to the Source of Hope. Adventist Church cofounder Ellen G. White wrote, “We are to minister to the despairing, and inspire hope in the hopeless” (“The Desire of Ages,” p. 350). Why not choose today to be a minister of hope for Jesus?

Kamil Metz is the international director for the GLOW ministry.

Unraveling 3 Mysteries Turns Mongolian Into a Missionary Batzul Ganbold wondered who named the animals, why people smoke, and what happens after death?

​Sharing Gospel With Vegan Food in Japan I wanted to open a restaurant where people could become healthier just as I had at an Adventist health resort in Alabama.