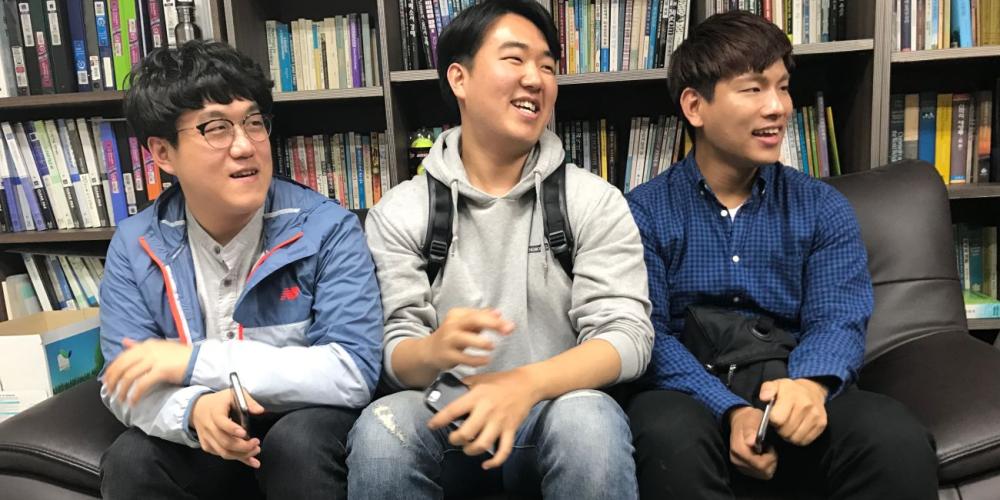 Six university students use memes and a radio broadcast to reach out to struggling youth.

South Koreans are among the most diligent Seventh-day Adventist gospel workers. Visit the Middle East, and you will find faithful Koreans in Turkey and Lebanon. Koreans live in Africa and South America. Even remote places in Bangladesh and India have an active Korean presence.

But despite this mission spirit, many young people in South Korea are struggling, local church leaders say. The problem is connected to a cultural generation gap and career challenges in a country where Saturday is a workday. But widespread derision from other Christians also hurts. While a quarter of South Korea’s population of 51 million is Christian, Adventists represent a tiny minority. The Adventist Church is dismissed as a cult, and members are mockingly referred to as “sdas,” a word that is a play on the church’s acronym, SDA.

Six Adventist university students decided that they had seen enough. They created a Facebook group and an online radio station aimed at nurturing fellow young Adventists.

It is unclear how many young people may have stayed in the church, returned to the church, or been baptized through the project.

“We don’t know the results,” Hyun said. “We are just sowing.”

But young Adventists have taken notice. The Facebook group, opened in 2014, has about 900 followers, a significant number for the Adventist Church in South Korea. It offers colorful memes with vegetarian recipes and testimonies. For the testimonies, administrators interview a young church member or sometimes a nationally recognized singer or actor who is Adventist, and the resulting testimony is spread across five or more memes. A big hit came with a series of memes highlighting historical facts about Adventist war hero Desmond Doss during the theatrical release of “Hacksaw Ridge.”

“We have found that informal content like this is easy for young people to embrace,” said project cofounder Taegyun Bong, 25, a theology major at Sahmyook University. “Young Adventists who have left the church have told us that they are finding healing through our ministry. We are so happy about that!”

The radio station, linked to the Facebook group, has the cheeky name RadioSda in a nod to the slur toward Adventists, and it offers a two-hour weekly broadcast. Broadcasts have included Korean church youth leaders talking about how they spend their Sabbath afternoons and a law school student discussing the challenges of keeping the Sabbath.

Some 700 to 2,000 people tune in every week, said cofounder Hyunho Kim, 27, an English literature student.

“Our whole project can be described in one word: willingness,” he said. “It’s easy to become passive in our Christian life, but we are young people who are willing to act to have an impact on the Adventist community.”

​The Case Against God As a former Moldovan prosecutor, I was determined to prove my Adventist roommate wrong.

How to Start a Missionary Movement Did you know that the Seventh-day Adventist Church has a strategic plan for the next five years? The plan is called I Will Go and it continues the Church’s mission to Reach the World. Adventists around the world are invited to participate and take the good news of the gospel to the ends of the earth. One Year in Mission in Argentina One Year in Mission volunteer serves at a center of influence in Lujan, Argentina. Among 9 other volunteers, Yanina feels privileged to realize her dream in mission work. From Bullied To Blessed Cartoon animated mission stories, the large city of Buenos Aires, Argentina, and an inspiring story from Uncle Homer. The Science Teacher A science major allows God to use him in a restricted country. As a Christian, he may not have been allowed to work there otherwise. From Dogs to Jesus Dogs and their owners in Quito, Ecuador are thrilled that One Year in Mission volunteers have become part of their community. The young volunteers came to share the love of Jesus—and surprisingly, this includes taking care of dogs. Mission Unusual Tokyo A Pioneer Life for Me A Global Mission pioneer in Botswana tells his story.