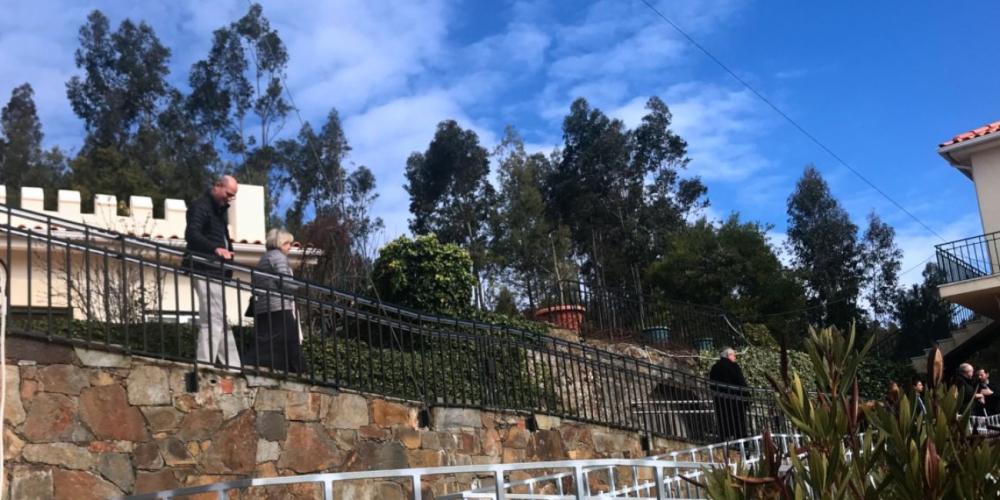 We had no money, but we ordered the railings for the VitaSalus Wellness Center anyway.

By Viriato Ferreira, as told to Andrew McChesney, adventistmission.org


A serious dilemma unexpectedly emerged on a Friday morning.

The architect of our VitaSalus Wellness Center announced that we urgently needed to put up railings around several buildings.

“If someone falls, you’ll be in trouble,” he warned.

We knew that he was right. VitaSalus — a clinic that works in harmony with the ethical, professional and spiritual values upheld by the Seventh-day Adventist Church — is located atop a mountain near the town of Penela, about 115 miles (185 kilometers) north of Portugal’s capital, Lisbon.

The architect put the total cost of the railings at 8,000 euros (U.S.$9,850). But he said we could pay only 4,000 euros by restricting the railings to the highest places.

I turned to our chief financial officer.

“Absolutely not,” he said. “There is no money.”

Worried thoughts filled my mind. Suddenly, a conviction struck me.

I shared this conviction with chief financial officer and other people present at the meeting.

“God will supply the means for these railings,” I said. “We will not put the railings everywhere, just where they are absolutely necessary. Are you comfortable in going ahead and ordering the railings?”

They nodded their heads in agreement, and I prayed, “Lord, we are going to order these railings because they are really needed.”

We ordered the railings.

Five days later, on a Wednesday, I received an e-mail from someone whom I had never met.

“Doctor,” he wrote. “I just want to tell you that I have deposited 4,000 euros into the VitaSalus bank account.”

“Praise the Lord!” I exclaimed out loud.

I wrote him an e-mail describing the events of the previous Friday morning.

“Doctor, this confirms that the money is for this project,” he wrote.

“On Friday morning, I woke up with a desire to help VitaSalus. I have never been there, but I just had that feeling. Still, I wasn’t sure whether my wife would agree with me, so I prayed a short prayer, ‘Lord, if this is Your will, put the same desire in my wife’s heart.’

“As soon as I finished praying, my wife came into my office and said, ‘Honey, you know that project in Penela? I think we should help them.’

“I couldn’t believe my ears, and I asked her, ‘How much do you think we should give?’

What a lesson for me! Had we stopped our work at VitaSalus because we lacked the funds, we would have lost out on a big blessing brought about by trusting in God. It was not about the railings. It was about God showing us how His work can be fulfilled when we trust in Him.

We opened VitaSalus because Adventist Church cofounder Ellen White wrote that Adventists should establish these kinds of “centers of influence” outside major cities around the world to provide the sick with relief from physical suffering and also spiritual help. We have treated about 250 people since 2014, and at least five people have been baptized. We are now in the process of looking to expand and to open similar wellness centers elsewhere.

If the Lord says wellness centers should be opened outside every major city, we just need to trust in Him, and He will make everything possible. He knows the cities. The railings taught me that we should make careful plans and then say, “Lord, if these are Your plans, it is up to You now to provide.”

Dr. Viriato Ferreira is director of the VitaSalus Wellness Center in Penela, Portugal, and honorary assistant director of the health ministries department of the Seventh-day Adventist world church.

South American Division’s President Asked for Money. We Had None But when we pledged to help the missionaries, God surprised us with a miracle.