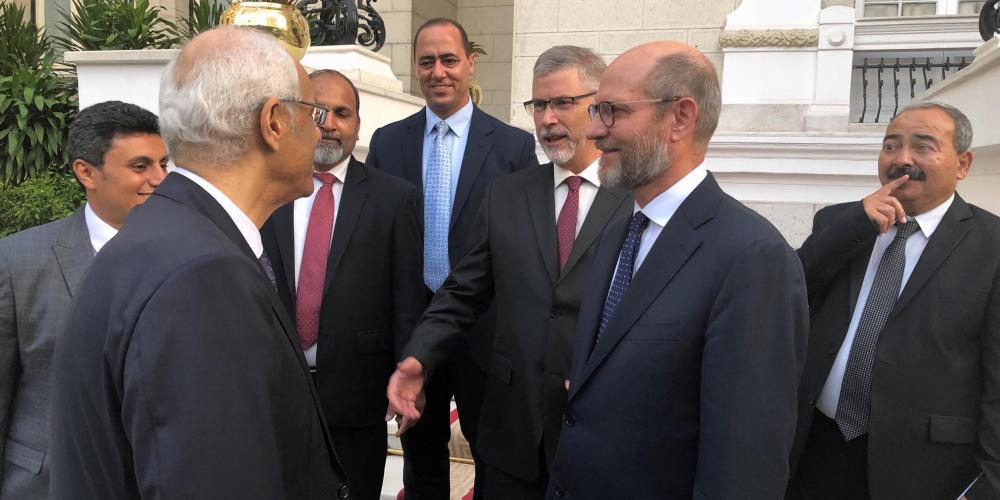 Ted Wilson thanks Egypt for religious freedom and prays for its people.

Wilson also spoke about the opening of an Adventist community center in Cairo and described the church’s worldwide work during the 37-minute meeting, which included six other church leaders and was scheduled at the personal request of Egypt’s president.

“The Lord provided us — a very small group of people in Egypt — with a wonderful opportunity to meet a high official and to share with him what we believe and what we are trying to do,” Wilson said in an interview.

Prime Minister Mostafa Madbouly welcomed Wilson and his delegation to an ornate government palace late in the afternoon of July 31, hours after the church leaders opened the Ramses Cultural Center. The community center, located in the newly renovated Center Church building in central Cairo, includes a preschool, a dental clinic, a literacy program, and classrooms for health seminars and an English-language school.

Wilson expressed his gratitude to the prime minister for the religious freedom that allows the church to help improve communities through initiatives such as the Ramses Cultural Center.

“We shared appreciation with the government for the religious freedom that is allowed to its citizens, and we are beneficiaries of that,” Wilson said. “The Seventh-day Adventist Church is willing to help build up society in every way possible by using Christ’s methods of assisting people physically, mentally, socially, and spiritually.”

Madbouly, for his part, spoke about the religious and cultural history of the Egyptian people and emphasized the government’s tolerance for various religions and cultures.

He also told his Adventist guests that Egyptian President Abdel Fatah al-Sisi had specifically asked him to meet with them. The president learned that Wilson would be in Cairo after local church leaders contacted the government to request a meeting during his July 30-Aug. 2 visit.

“We were very honored that the president’s office took this so seriously,” Wilson said.

In another indication of the importance that the government placed on the meeting, state television mentioned the talks at least twice on evening news programs.

Church leaders were ushered into the Egyptian Cabinet’s main meeting hall for the talks at 5:38 p.m. The prime minister, who was joined by four government officials, sat at the head of the table, while each church leader took a seat by his place name.

The meeting itself sent a strong signal that the government is open to fostering a climate of freedom for worship, said another participant, Rick McEdward, president of the Middle East North Africa Union.

“Even though our numbers are not large here in Egypt, we are deeply appreciative of the Egyptian government for allowing us the freedom to worship,” he said.

The Adventist Church has 800 members in Egypt, a country with a population of about 100 million.

Johnny N. Salib, secretary of the Egypt-Sudan Field, said he was touched by Wilson’s prayer at the end of the meeting.

“God led Pastor Ted to pray for the prime minister and his office,” he said. “This was a blessing and can help encourage a good relationship with the government.”

During the meeting, Wilson noted that Madbouly, 52, faces heavy responsibilities after being appointed prime minister in early June and simultaneously retaining his previous position as government minister for housing and urban utilities.

With the prime minister’s consent, Wilson offered some leadership advice from the Bible. Opening his black Bible to Micah 6:8, he read, “He has shown you, O man, what is good; and what does the Lord require of you but to do justly, to love mercy, and to walk humbly with your God?” (NKJV).

Madbouly and the four other government officials listened attentively as he read. Then Wilson prayed for the president, prime minister, the government, and the people of Egypt.

After the prime minister excused himself, a senior government official approached Wilson and grasped his hand.

“Thank you,” he said. “I am so happy, especially for that prayer. I’ve never met somebody with this kind of prayer or had this kind of interaction. Thank you so much.”

Wilson said the encounter surprised him.

“You never know what kind of impact something like this will make,” he said. “It was a humble, lowly visit. But God’s Spirit was in the presentation, and He was working to touch hearts in ways that you would never even imagine.”