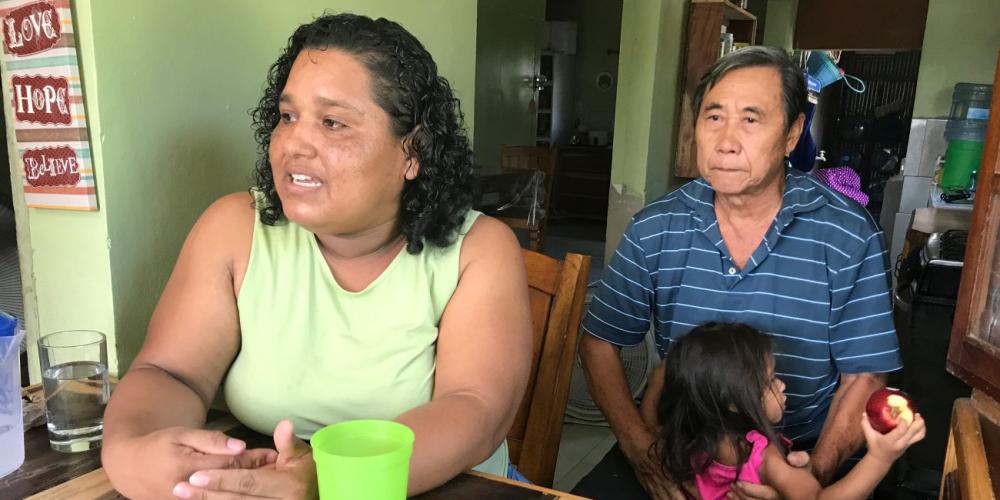 In the first part, Olga Chee hears him speak on the radio. Then she prayed for God to reach her husband, too.

The first time that Olga Chee asked her husband, Johnny, if he would go with her to the Seventh-day Adventist church, he replied sharply, “I’ll go with you to any church except that one!”

Johnny thought the Adventist Church was a cult, and he rejected a second request from Olga a few weeks later.

Olga and Johnny were looking for a church in Orange Walk, a town of 15,000 people in the Central American country of Belize. Neither was particularly religious, but Olga had been overcome with a desire to go to church.

The couple went with friends to a Sunday church several times, but something didn’t feel right. “Whenever we came out of church, our lives were still the same,” Olga said. “We gambled with our friends, and my husband drank. I felt an emptiness that I didn’t understand.”

Behind their house lived an Adventist couple. The wife came to the fence and talked and prayed with Olga. She twice invited Olga and her three children to church, and that was when Olga asked Johnny if he would go with them.

Finally, Olga wound up at another Sunday church, and Johnny fell in love with those church members. They attended the church for nearly five years.

But then Olga and Johnny began to feel once again that something was lacking in their lives. They prayed to God for help.

A few days later, a relative called Johnny, who owned several small businesses, to ask for help with a pizza restaurant on the other side of the country.

After he left, Olga prayed, “God, if it is Your will for us to move, please give me a sign. Let the sign be that I don’t take anything from the house except the children and the clothes on my back.” She didn’t tell anyone about her prayer.

Four weeks passed, and Johnny called Olga to announce that she and the children were moving.

It sounded like the answer to her prayer, so Olga moved with the children. She found a church belonging to the same denomination as in her old town. A Bible verse at the front of the church caught her attention. It read: “Today, if you will hear His voice, do not harden your hearts” (Hebrews 3:15; NKJV).

Olga read the verse every Sunday for six months. After that, Johnny finished his pizza work, and the family moved back to Orange Walk. Olga and Johnny returned to their old church, but something didn’t seem right.

One morning, Olga turned on the radio and heard Adventist evangelist Doug Batchelor speaking about the Sabbath.

“For some reason, my heart lit up as he spoke,” Olga said. “Then I remembered the Bible verse about not hardening my heart. I knew that I had to act.”

Olga found Johnny working in a restaurant that he had opened recently.

“What do you think about the Sabbath?” she asked.

Johnny angrily yelled at her, “I don’t want to hear anything about the Sabbath! Sabbath can be a Wednesday, a Friday, or any other day. It doesn’t matter.”

Olga backed off. “If we are going to argue about this, then it is not from God,” she said. “Let’s leave it for now.”

That afternoon, Olga knelt in the restaurant kitchen and said, “God, if it is Your will to keep the Sabbath, make my husband come with me to church. You created the family, and You don’t want to break up my family.”

Olga went to bed at 9 o’clock that night. When she got up to use the bathroom at 1 a.m., she noticed that Johnny was sitting in front of the computer and had an open Bible on the table. He was searching for something. Johnny didn’t say a word, and Olga went back to bed.

In the morning when Olga got up to go to work, Johnny said, “You know what? I’m totally convinced that we need to worship God on the Sabbath.”

Olga was shocked! She asked her husband to explain why he had changed his mind. He told her that he had turned on the television after she had gone to bed. He had ended up watching a program with Doug Batchelor.

“Doug Batchelor was preaching about the Ten Commandments and how people were being misled about the Fourth Commandment,” Johnny said. “That led me to start a deeper research into the Bible that night.”

Olga and Johnny went to the Adventist church the next Sabbath and have never looked back.

Part of a 2015 Thirteenth Sabbath Offering went to Belize to help build an evangelism and conference center. Thank you for your mission offerings.

Seville Interview New Life Mures is a center of influence in Romania that was born out of a desire to meet people who want to adopt a healthy lifestyle.

Hooray for Crooked Teeth! God answers a 12-year-old girl’s prayer for braces in an unexpected way.