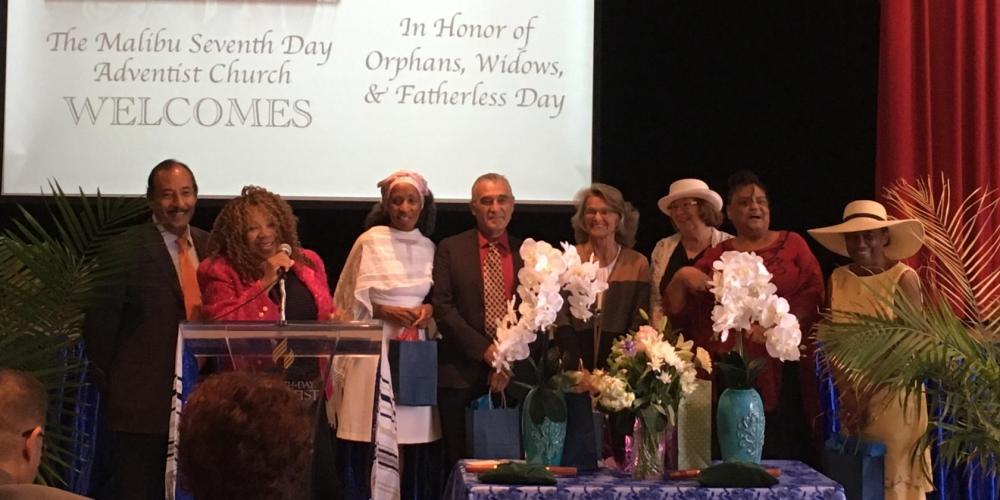 Laughter and excited chatter filled a Seventh-day Adventist church in the U.S. state of California last Sabbath as church members threw a party complete with a healthy meal and gift bags for a large group of foster children.

Adventist Mission played an unexpected cameo in the Malibu church’s inaugural “Orphans, Widows, and Fatherless Day.” Nestled among the goodies in the gift bags were DVDs containing mission stories.

“Each child got a DVD, so the Spirit of God will be able to touch their hearts,” said Judith Miranda, who organized the event.

“It was phenomenal!” Judith said.

The remarkable story behind the Orphans, Widows, and Fatherless Day started in February when Judith woke up to an internal voice saying, “Judith, the pure religion is James 1:27: ‘Take care of the orphans and the widows.’”

Judith pondered what she had heard and finally decided to organize the special day at the Malibu church. But she prayed, “Lord, if you want me to have this day, You’re going to have to find the kids. I don’t know how to get them.”

Moments later, Judith felt impressed to google the words “orphanage” and “fatherless” on her iPad. About 50 results came up for her region near Los Angeles. She dialed the phone number of a private foster placement agency. Getting the director on the line, she identified herself as a Seventh-day Adventist and said she was seeking to obey God’s command to care for orphans by organizing a special celebration.

“What do you want to do with them?” the director said curiously.

“We would love to buy gifts for the kids,” Judith replied. “We want to have a healthy meal for them. And we want to share the love of Christ. We want them to know that even though they might not have earthly parents, they are so special to God and they are special to the Malibu church.”

The director paused. “Ma’am,” she finally said, “I have never, ever, seen anyone who’s done anything so kind for these children.”

She told Judith that some foster children are depressed and sleep all day. She promised to call back later.

Judith then called the Los Angeles County Department of Children and Family Services. The person who answered the phone asked for more information by e-mail, which Judith sent.

Two weeks later, the private agency’s director called to say she had 14 children for the event.

“This is so wonderful,” the director said. “Do you mind if the staff come as well? They would love to see this.”

Judith extended an invitation to the staff.

Three more weeks passed. At work one day, Judith couldn’t stop thinking that she should cancel the event. She only had 14 children, and it seemed better to wait until more children could be found. She wondered why God would impress her to organize the event and then cancel it.

Driving home, her phone rang. It was the director of the Los Angeles County Department of Children and Family Services. He had read her e-mail and wanted to know how many children she wanted.


Judith couldn’t believe her ears. She said she realized at that moment that the devil had been trying to convince her to cancel the program.

The director continued. “Just tell me how many you want,” he said. “By the way, I would love to come. May I also bring the foster parents of the children? And I have staff members. May I bring them?”

The Malibu church, which has 214 seats, quickly finalized arrangements for the now-big event. They prayed about the program and about what gifts to present to the children. Judith’s husband, Job, offered to donate toothpaste and toothbrushes. Someone else said, “I’ll get some good old-fashioned vegan trail mix bars.” Yet another person said, “I’ll buy everyone a painting set because maybe there is an artist among those kids.” Other church members volunteered to buy socks and Bibles.

“But in my heart, I knew that something was missing,” Judith said. “These kids needed something to get out of being depressed or lonely. So, I thought about Adventist Mission DVDs.”

“I love those Adventist Mission stories with all my heart, and God knows how much watching them means to me,” Judith said. “They inspire us to work for God.”

So, she called Adventist Mission’s office at the headquarters of the Adventist world church in Silver Spring, Maryland, in late March. She described the special day to the receptionist and asked for DVDs to present to the children. Asked how many she wanted, she thought about all the children, bit her tongue, and said, “Could you spare 60?”

The receptionist promised to see what she could do. She shared the story with Rick Kajiura, communication director of Adventist Mission, and he organized a box for shipment.

“We sent out about 500 back-issue DVDs to Judith,” Rick said. “It’s wonderful to see how they are being used for outreach.”

The box arrived at Judith’s home on March 30, two weeks before the event. Judith was ecstatic when she called an Adventist Mission journalist, who knew nothing about the DVDs, to break the news.

“I feel like someone gave me $5 billion,” she said by phone hours after receiving the box. “Hallelujah!”

“It was a sanctified day!” Judith said afterward. “Everyone had a wonderful time in the Lord. We showed ‘Mission Spotlight,’ and the visitors were so amazed at the story. During the welcome for the 11:00 a.m. service, we gave DVDs to all the adults. You should have seen them! Some held the DVDs close to their chests with a big smile.”

Judith said she was especially thrilled to see the foster children with their own copies of “Mission Spotlight.”

“I’m so happy that Adventist Mission will be part of these children’s lives,” she said. “They will have Bibles and the stories to go with them. That’s so beautiful.”

She said she learned a big lesson through the experience.

“If you give to those in need, God will give back,” she said. “Look at those DVDs. I thought 60 was too much. But God made sure that everyone got a DVD — and we had enough to hand out door-to-door in the community.”

April 15 - Pathway to Health, LA | Part 1 They city of Los Angeles is the second largest city in North America. Find out how the Seventh-day Adventist Church is meeting the needs of the people here.

Russian’s Story of 3 Miracles My sister didn't need surgery, my mother overcame a stroke, and my father died.

Finding the True Essentials in Life Mission in Cambodia, terrific Tuesdays in New Zealand, and perspective on mission in Quebec City. Join us as we take a look at mission around the world. G’day from Dubbo "I never thought in my life I would be part of a Bible study group," said one person in Dubbo, Australia. Watch to see how people's lives have been transformed thanks to real relationships. A New Way of Learning in Lynn The town of Lynn, Massachusetts didn't have enough students to have an Adventist high school. That didn't stop them from offering an Adventist education to kids in the area. A New Way of Learning A school in the Amazon, the heartfelt testimony of a former missionary, and a unique school in Lynn, Massachusetts. Join us as we explore mission around the world. A Love Story on the Amazon Dr. Íris and Dr. Tayana were prepared to do mission work, but what they didn't expect was to fall in love on the Amazon. Mission Unusual Tokyo A Pioneer Life for Me A Global Mission pioneer in Botswana tells his story.