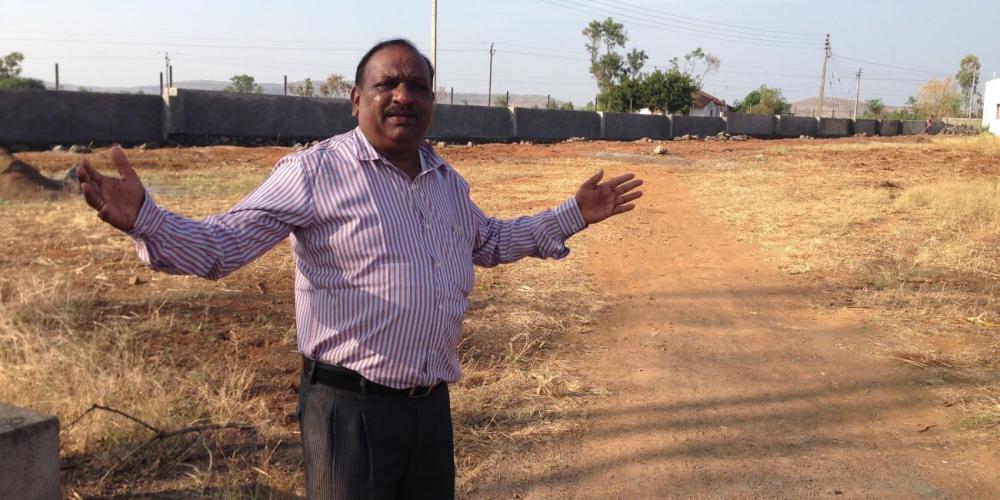 
A Seventh-day Adventist school located on a dusty plain in western India owes its existence to the unexpected kindness of Indian royalty.

But the school is praying that a 13th Sabbath Offering earmarked for desperately needed classrooms will grow miraculously to provide funding to upgrade worn-out infrastructure and build a new girls’ dormitory as well.

The Alate Seventh-day Adventist School has been chosen to receive funding from the 13th Sabbath Offering in third quarter 2017 to construct a new building with 14 classrooms.

“Our basic problem is the same as what it was in 1960: infrastructure,” said Manohar Karnad, a longtime educator who was appointed principal of the rural K-10 school in July 2016. “Without infrastructure, there are no students. Without students, there is no school. This vicious cycle must be broken.”

The unassuming school on 17 acres (7 hectares) of parched dirt is located just up the road from a gated private school occupying 150 acres (60 hectares) of hills and green meadows.

Karnad said the luxury technical education institute, founded by a wealthy Indian businessman, and other newer schools have made it difficult for the Adventist school to have a competitive edge. But he said he is convinced that his school a unique level of education.

“We are facing challenges from neighboring schools, which are flourishing like mushrooms,” he said. “Yet we have a strong academic program, and we stand apart because of this. More than that, our education prepares children for a life of service, not just to work as professionals.”

In addition, the school, which has 260 students, including 35 in dormitories, gives special assistance to underprivileged children in the nearby town of Hatkanangale and the surrounding area, the principal said.

Read a shorter version of this story, which is the adult mission story for July 22

Gift From a King

The Adventist Church acquired the school’s plot of land in 1920 for a token sum from Shahu, ruler of the princely state of Kolhapur. The Indian ruler had struck up a friendship with U.S. missionary S.O. Martin and asked him to build a clinic and school, Karnad said.

“They formed a very strong friendship,” he said. “The king asked, ‘What do you want from me?’ and the missionary asked for a piece of land. So the king stretched forth his hand and said, ‘Take what you need.’”

A clinic operated on the land until 1981. A boarding school opened in 1943 but closed in 1960, partly because of decaying infrastructure and because another Adventist school opened in the north of the state, Karnad said. Alate’s students moved to the other school.

But school’s closing took a toll on Adventist work in the area.

“It created a sense of defeat,” Karnad said. “But God helped us reopen the school in 1981.”

Today, five aging buildings dot the campus, including two dilapidated buildings that were built for other purposes but now contain classrooms. Karnad lives with his wife and two young adult sons in S.O. Martin’s old house. A section of the large house has been walled off for the girls’ dormitory. Boys live in another building next to a vegetable garden on the other side of the campus. Students are expected to work in the garden, in the nearby cafeteria, and elsewhere on campus.

“Students have to work two hours a day in our work program” Karnad said. “We believe in the dignity of work.”

“Our Wants Are Many”

An afternoon visit to the two-floor boys’ dormitory found the dean taking a nap on the ground floor as boys crouched on the second floor, doing their homework. Each room was furnished with three or four bunkbeds. Fastened to the wall by one bunkbed was a small handwritten note, reading, “Thou shalt not steal,” an apparent reminder not to take others’ possessions without asking.

“Our wants are many,” Karnad said. “We need an auditorium to meet for worship. We meet on verandas during the rainy season and in the sports field when it’s dry. We also need a girls’ dormitory.”

Small but important changes are taking place on campus. A brick wall is being built around the parameter of the campus to prevent encroachment. The new classroom building is expected to take the school to the next level.

“This school is on the progressive side and is bringing change to this area,” Karnad said.

He noted that 60 percent of the students are Christian, half of whom are Adventist, and the rest come from other religious traditions.

“The morality stories that we teach are told by the students to their parents, and some parents are interested in knowing more,” he said.

“I present to you this infrastructure that needs to be replaced,” he said. “We are waiting for good people to visit and take notice of God’s work that is going on in this area.”

A portion of the 13th Sabbath Offering in third quarter 2017 will be used to construct a building with 14 classrooms for Alate Seventh-day Adventist School in Hatkanangale. School principal Manohar Karnad hopes that any overflow from the offering can be used to repair and expand the dormitories, which house 35 students.

Prayer Brings Church Back to Life in Romania The Bucharest international church had only three members. Now up to 50 people attend every Sabbath.

Feared Witchdoctor Burns His Charms for Jesus Joseph Maduhu is among 117,000 people baptized in TMI outreach in Tanzania