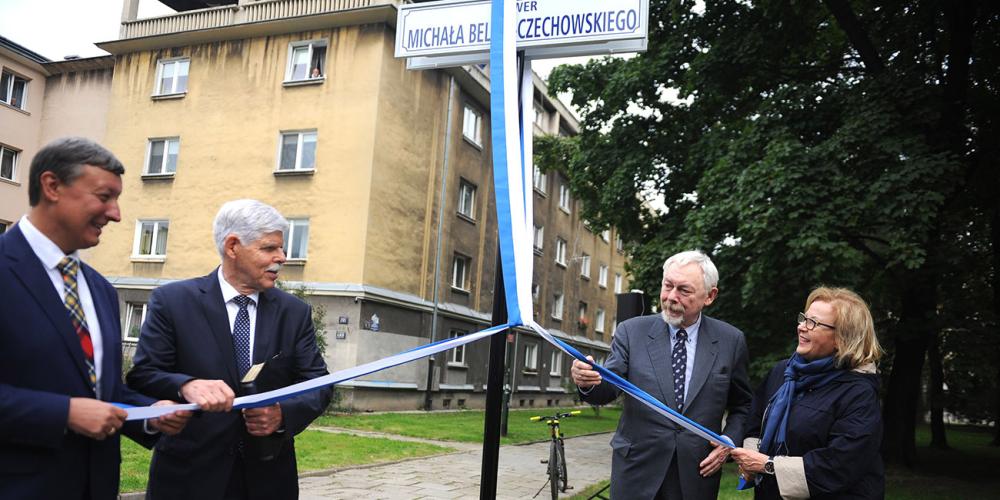 Poland’s second-largest city, Krakow, has named a public square after the first Seventh-day Adventist missionary to Europe as part of 100th anniversary celebrations of the Adventist Church in the city.

Krakow, a city of 767,000 people near Poland’s border with the Czech Republic, inaugurated the square in honor of Polish native Michał Belina-Czechowski at a ribbon-cutting ceremony attended by the city mayor, parliament members, church leaders, and other dignitaries.

Czechowski, who was born near Krakow in 1818, became a Seventh-day Adventist after immigrating to the United States. At his own initiative, he returned to Europe in 1864, becoming the first unofficial Adventist missionary to the continent. The first official missionary was J. N. Andrews, whom the church sent to Switzerland a decade later in 1874.

Krakow Mayor Jacek Majchrowski spoke warmly about the Adventist Church’s century-long presence in the city at the inauguration of Michał Belina-Czechowski Square. He highlighted the church’s humanitarian efforts in the aftermath of World War II and in the early 1980s, when the Polish government imposed strict martial law in an attempt to stifle political opposition.

“After World War II, foreign leaders of the Adventist Church worked with Krakow city authorities to identity orphans and widows from the Auschwitz concentration camp, and donated food and clothing to them,” the mayor said. “The Adventist community also was active during martial law in the 1980s, providing residents with gifts from abroad.”

The leader of Poland’s Małopolska province, whose territory includes Krakow, thanked local Adventists for their community outreach programs, singling out those that promote a healthy lifestyle.

“This is also a very important educational effort that Adventists are actively undertaking,” the leader, Iwona Gibas, who holds the title “marshal,” said as she presented church leaders with the province’s highest award, the golden Małopolska Cross.

Adventists are known for their charity work in Krakow. In the 1980s, they organized free smoking cessation programs attended by about 10,000 people, of whom about 80 percent successfully stopped smoking. They have distributed more than U.S.$29 million in community aid since the 1990s and also sponsor development programs in Kenya and Tanzania through the local office of the Adventist Development and Relief Agency.

Krakow’s first Adventist church was established by eight women in 1920, more than 50 years after Czechowski returned to Europe to share his faith. Czechowski dreamed of working as a missionary in what is today Poland but was barred from the region because of nationalist activities that he had engaged in prior to immigrating to the United States. He died in Vienna in 1876. Today, the Adventist Church has about 6,000 members in Poland, a country of 38 million people.

“He acted uncompromisingly … as the first European missionary for a then-new religious community,” he said at the inauguration of the square.

Marek Rakowski, executive secretary of the Adventist Church in Poland, expressed joy that the city of Krakow accepted a request that he had made to name the square after Czechowski.

“It is a miracle that a square in Poland’s second-largest city has been named for Michał Belina Czechowski, an Adventist,” he said.

Among the other 100th-anniversary celebrations, local Adventists distributed 100,000 copies of The Signs of the Times magazine in local newspapers and organized an open-air Bible exhibition called, “The Bible: The Bestseller of All Time,” at the foot of Wawel Castle, one of Poland’s most historically significant sites. They also planted several hundred bushes in Krakow, an initiative that received broad coverage in the local media.

No Way, God. I Won't Do This! Cheri Peters prayed to be a missionary as she watched a Mission 360º story at her local church.

A New Beginning A Global Mission pioneer starts new work near mount Ararat, a woman decides to become a missionary after watching Mission 360° stories, and an urban center of influence in Chile helps a suicidal woman.