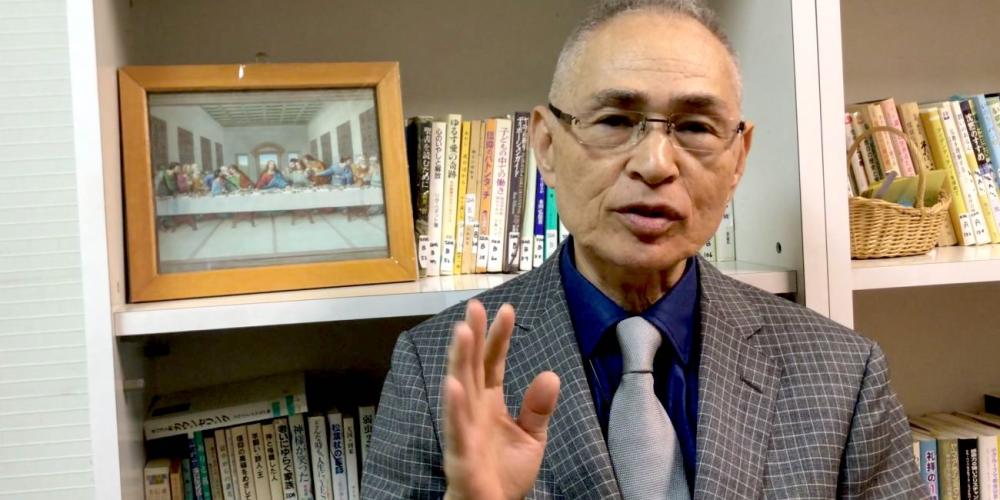 ​Japanese Man Has Dreams and Visions of Jesus

Holy Spirit is working as dozens of guests show up in Adventist churches for evangelistic meetings across Japan.

A 67-year-old Japanese man had visions of Jesus while lying on his bed on two separate mornings in the city of Osaka.

Then he saw Jesus in a night dream.

But the man, Susumu Kanai, wasn’t a Christian and didn’t immediately recognize Jesus.

After two more unusual occurrences followed in short succession, Susumu turned to the Bible to seek answers. He arrived at Osaka Center Seventh-day Adventist Church in March, just weeks before evangelistic meetings began at the church.

The visions and dreams puzzle Susumu, and he is eager to know more about Jesus.

“I don’t know why I saw Jesus,” he said in an interview at the church. “But I want to find out why, and that is why I’m here.”

Susumu is among dozens of unsolicited guests who have showed up in Adventist churches in the runup to evangelistic meetings at 161 sites across Japan. Church leaders have never seen anything like it in a country where Christians account for only 0.7 percent of the population. They said the Holy Spirit is being poured out as church members worldwide pray for Japan.

“Something is happening here in Japan,” said Yoshikazu Nemoto, an elder at Tokyo’s Tachikawa Seventh-day Adventist Church, and a member of the General Conference Executive Committee.

“We always get some visitors, but lately more are coming who are seeking the truth about the Sabbath,” he said. “They aren’t coming by invitation. They are searching on their own.”

Toshio Shibata, executive secretary of the Japan Union Conference, said a similar influx of visitors took place decades ago, but he has not witnessed anything like this until now.

“The Holy Spirit is at work,” he said.

Susumu Kanai describes his plans after being impressed to seek Jesus in his life. In English and Japanese. (Andrew McChesney / Adventist Mission)

2 Visions and a Dream

In Osaka, Susumu had his first vision of Jesus as he lay in bed, musing about life, at 5 a.m. in December 2017. He had contemplated life this way every morning for 12 years in his hometown of 2.6 million people, located 310 miles (500 kilometers) southwest of Tokyo. But this time, he was startled to see a bright light and a back-lit figure with outstretched arms.

Curious to know more, Susumu searched online and found a photo of the giant “Christ the Redeemer” statue with outstretched arms in Rio de Janeiro, Brazil. He concluded that perhaps he had seen Jesus that morning.

Lying in bed a few mornings later, he saw a bearded Man wearing a white priestly robe and some kind of apron. He only realized that it was Jesus weeks later when he started taking Bible studies at the Adventist church and saw a painting of Jesus dressed as the High Priest.

A short time after the second vision, Susumu dreamed that he was seated across from a Man at a table. The Man had His hands on the table and was surrounded by a bright rainbow. Waiting at a barber shop several days later, Susumu paged through a book of famous paintings and saw Leonardo da Vinci’s “The Last Supper.” He recognized Jesus from the dream.

“Even after all this happening in a few days’ time, he still didn’t go to church,” said Sheri Abbott, a U.S. missionary in Osaka, who is giving Bible studies to Susumu with her husband, pastor Rex Abbott.

Several more days passed, and Susumu had a night dream that he and seven other men were captured in a foreign country. He watched as the seven men were killed one by one. When his turn came to die, someone grabbed him from behind and whispered, “I’m of the Coptic religion. Come with me.”

Susumu woke at that moment. He had no idea what “Coptic” meant, so he looked online and was astonished to find a Coptic church in Kyoto, a city located only 35 miles (55 kilometers) north of Osaka. For the first time he wondered whether he should go to church.

A few mornings later, Susumu had another vision in bed. He saw the words “Gospel of Matthew” run across his mind’s eye from left to right, like a digital advertisement. He didn’t know what the words meant, so he looked online and learned that Matthew was a book of the Bible. He immediately downloaded an audio version of Matthew and started listening in his car.

At the same time, he asked his landlady, whom he knew was a Christian, where she worshipped. She brought him to the Osaka Center Seventh-day Adventist Church, where he took introductory lessons to Christianity and the Bible before the evangelistic meetings started. He has attended every meeting. 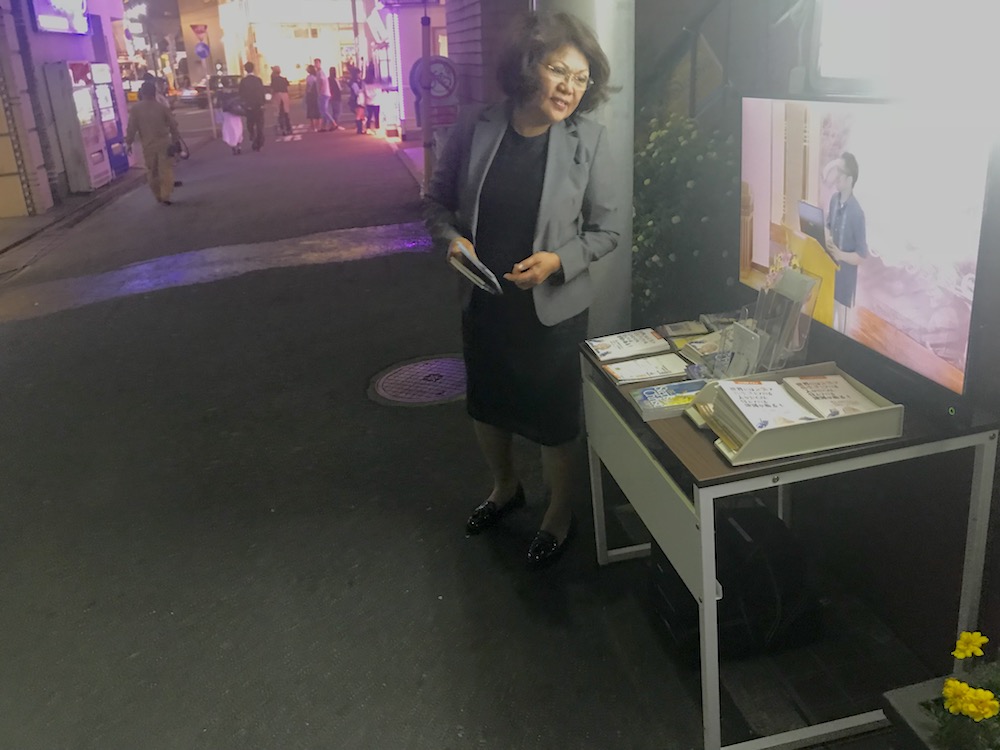 Other Christians Show Up

Nemoto, the church elder, met one such woman in mid-May at Urawa Seventh-day Adventist Church in a northern Tokyo suburb. The woman said “amen” frequently as he taught a Sabbath School class about how humans changed the Sabbath from Saturday to Sunday.

“Church members told me that she was looking for the truth and somehow found our church,” he said. “She studies very hard, not only the Bible but somehow she found Ellen White books and reads them, too. She believes those truths.”

The woman is so enthusiastic that she has presented her Sunday pastor with an Ellen White book and intends to give him more.

At another church, Nemoto met a young woman whose parents and grandparents serve as elders and deacons for another Christian denomination.

“She found the truth about the Sabbath on her own and wanted to know more,” he said. “I sat down with her for several hours and gave her a Bible study. She was so happy.”

A little innovation by church members has also drawn visitors into evangelistic meetings. People have walked into Tokyo Central Seventh-day Adventist International Church after seeing a live-stream of the meetings on a street-side television outside the building, said Gerard Sexton, a software engineer from Australia, who helped place the television. On the first day, one visitor was a former Adventist from Africa, he said. On another day, a Japanese mother was so impressed to see the English-language services that she resolved to bring her children to the church to learn English.

Other visitors are attending the meetings at the invitation of church members. Jenny Takeda, a Filipino who has lived in Japan for 25 years, called two Filipino friends whom she hadn’t seen in five years and is thrilled that they came to the meetings.

She said the Holy Spirit’s influence is extending beyond the church and into her troubled relationship with her Japanese mother-in-law.

“We had arguments because she was angry that her son married a Filipino,” she said. “But now we have peace at home. I think it is love.”

She is praying for the Holy Spirit to convict her mother-in-law and husband to accept Jesus.

Adventist Church president Ted N.C. Wilson, who is leading an evangelistic series in Tokyo, marveled at the power of the Holy Spirit.

“The Holy Spirit is doing something extraordinary in Japan, bringing people to the church and convicting them,” he said. “We need to pray for the latter rain of the Holy Spirit so countries like Japan and many others become completely inundated with the Advent message.”

​2 Russian Projects Among Recipients of $415,000 in Mission Spending The “urban centers of influence” will open in the Russian cities of Novosibirsk and Ulan-Ude.

It's a Joy to Serve A Global Mission pioneer coaches volleyball, the director for ADRA in New Zealand, and Adventist volunteers working in Cyprus.