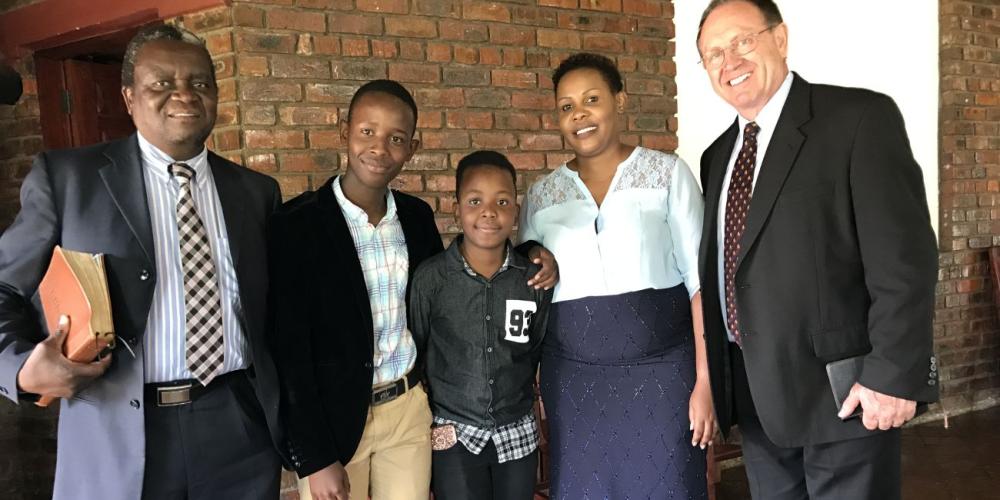 A weekend trip to Zimbabwe reenergizes the church’s leader for Total Member Involvement.

An 11-year-old boy, Matthew, came forward for baptism at the end of my sermon last Sabbath in Zimbabwe’s capital, Harare. With him were his mother, brother, and 16 other people.

I thought, “Kid, you’re embarrassing me. I have to go.”

Finally, the church’s pastor motioned me back to the platform. What a relief!

After the worship service, pastor Jonathan Muvoshi explained that Matthew had learned the Seventh-day Adventist message while studying at a local Adventist school. Matthew shared his new faith with his mother and brother, and the trio started attending church together.

Then Matthew cornered me again in the church.

But Matthew persisted. “Why not try?” he said.

As my wife, Kathy, and I drove back to the hotel, I said to her, “That kid is amazing!”

Matthew had listened intently as I spoke in church about my desire to combine my work with Adventist World Radio, where I serve as president, with my love for Total Membership Involvement, an initiative that I oversee for the Adventist world church.

For the next few hours I kept thinking about Matthew’s questions. Yes, we must figure out how to do YouTube evangelism, and we must teach people how to do Facebook Live. But what about other social media opportunities? Is the Adventist Church being left behind?

Curiously, Kathy and I weren’t even supposed to be in Zimbabwe last weekend. We had planned to visit Lubumbashi, a second-largest city in the Democratic Republic of the Congo, as part of an extended trip to Africa. But our visas had not arrived in time. As we prayed about what to do, we felt impressed to travel to Zimbabwe and alerted ADRA’s director for Zimbabwe, Judith Muvoshi, that we were on our way. Judith, a good friend, is married to pastor Jonathan Muvoshi.

Judith happened to be making a rare visit to the Doma people in a remote corner of northeastern Zimbabwe when we contacted her. The Doma people are a primitive group like the pygmies in the Congo and the bushmen of the Kalahari, and reaching them requires an eight-hour drive on rough roads.

Judith and other church members have worked closely with the Doma people, the so-called Lost Tribe of Kanyambe, for the past two years. ADRA has helped drill two wells and taught the Doma people how to plant, harvest, and store crops. Adventist women’s ministries have taught the women how to sew and make soap. A Global Mission pioneer has taught them about Jesus.

More than 300 people have been baptized over the past two years. This is Total Member Involvement at its best — all working together to accomplish something great for Jesus!

But bureaucracy had held back the opening of an ASI-built school for the past 18 months.

When Judith learned about our arrival, she informed government officials that the people who had helped secure funding for the school were en route. If the school didn’t open soon, she said, funding for other projects might dry up.

We traveled to the Doma people the next day. When we arrived, government officials immediately told us that the school for the smaller children and adult literacy classes would open in two weeks and the rest would be fully operational by Jan. 1. Had we not changed our tickets and flown to Zimbabwe, the school wouldn’t have opened so soon.

Back in my Harare hotel room, I thought about the Doma people and Mathew.

From those two experiences, I am convinced that we need to proclaim the gospel in every way possible — especially through “high tech” methods such as social media. As we work with Total Member Involvement, we also must use “high touch” to reach out together to people who have never heard of Jesus.

But as the school experience showed, we need to humble ourselves before God and pray earnestly for the Holy Spirit to lead us. Only then will we succeed in spreading the gospel to the Doma people and beyond.

Duane McKey is assistant to the Adventist world church president for Total Member Involvement and president of Adventist World Radio.

Sabbath Fills a Female Pastor’s Emptiness Reading Ellen White books hurt my pride as a pastor, so I read them when my husband wasn’t home.

God Filled a Hole in a Missionary’s Head The surgeon gave Frank Cantrill the disturbing diagnosis that his skull had died.