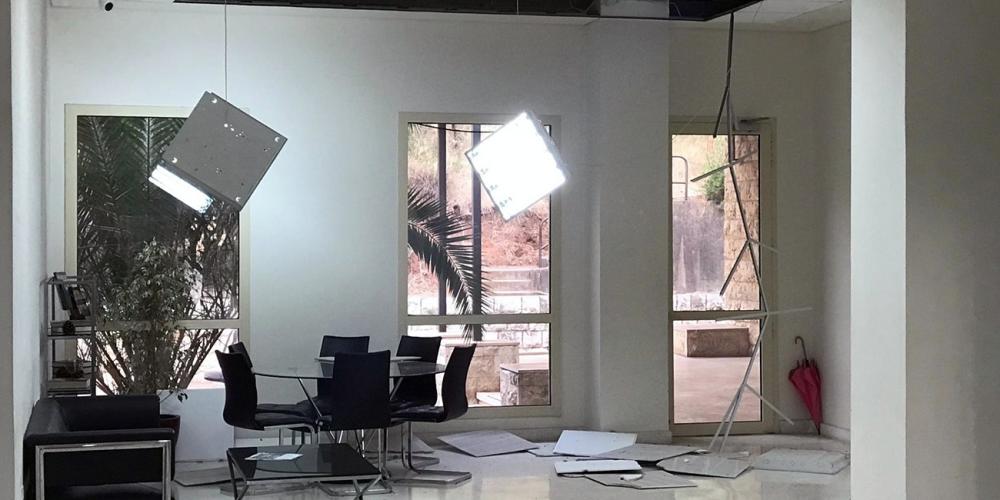 What Good Can Come From Beirut Blast?

My mind raced to register what was happening. A bomb on campus? A plane crash? An earthquake?

I barely noticed the first thud and shudder.

We’d had breezes all afternoon that rattled our front door. But the second, unfamiliar thud-shudder was unmistakable. In a politically fragile world, I know the possibilities well: Fireworks? A machine-gun? A car bomb? A fighter jet flying over? While nothing had ever involved me personally, I had learned that every sound has a meaning, sometimes tragic.

I thought nothing of stepping out onto our front step to investigate. From my hilly outpost above the campus of the Seventh-day Adventist Church’s Middle East University, I looked across the sprawling city of Beirut below, past the port, and toward the Mediterranean Sea. I noticed clouds — a mushroom, it seemed — dispersing in high-speed flourishes across the sky overhead. But I was more focused on the enormous billow of smoke coming from the port area. Not normal. Not good.

I stepped further out on the porch just as a massive explosion enveloped me. A wall of wind with dust and debris lifted me forcefully and threw me back into the house. I grabbed the door but couldn’t get a grip to close it. The force seemed to blow straight through the walls. The window curtains twisted crazily around me. I could hardly stand.

My mind raced to register what was happening. A bomb on campus? A plane crash? An earthquake? How do you know what to do when you don’t know what’s happening? I felt like I was struggling to exist. Then, as sudden as the blasting wind, silence. In the split second of relief, the door gave way to me, and I slammed it shut with my whole body, like you do in a dream when the bear is chasing you. Plaster dust settled at the base of the frame.

I wanted to look out the window, but I didn’t know if more was coming. I wanted to be safe, but where was safety? So I paced the hallway, my hands shaking. I started breathing again. Everything was eerily silent. Normal. I returned to my computer and searched futilely for breaking news. I tried to remember what I’d been working on. The impact had shattered my mind. The sound of sirens reminded me it wasn’t just a dream.

A few minutes later, my husband called from the campus down the hill. Oh yes. I’m fine. He’s fine. Broken glass all over campus. Ceilings pulled down. Students frightened. We asked each other inane questions nobody expects to answer. He got home hours later, his ears still ringing.

Days later, the questions have only increased. There are no human solutions for what Lebanon has been experiencing — and especially not this. But one thing we know for certain. We will claim this country for God and for the purpose of His work and His honor.

We claim, too, that God is faithful to work good even in the midst of evil and destruction. Local residents who have suffered years of war are meeting waves of dread; even without physical wounds, emotional wounds have been ripped open. The only assurance we can give is God’s comfort when the memories and the losses are overwhelming. The fear around us sees only deep shadows ahead. So we lift the politics, the corruption, the plummeting lira currency, the COVID-19 counts, the blast, and the inconsolable pain into His presence. The one certain good is that we are driven to press close to Him.

Minutes after sitting back down at my computer, Osman called. I had taught him an online violin lesson earlier in the afternoon. We’d ended the lesson just moments before the explosion. Now he was calling back, his eyes wild, his face sweaty, his phone jerking around to show me the destruction of his family’s tiny apartment.

“It is all broken. All broken, Miss.”

That wasn’t new to him. His family had been bombed out of Aleppo in Syria six years ago. For him, the Aug. 4 tragedy wasn’t the broken apartment. It was the familiar cycle of loss.

It’s a cycle I can’t break. I can't numb the pain, reclaim the losses, rebuild a country. Nobody can. But we are not helpless; we are not victims. We stand in the presence of God, interceding for what is beyond our power to change and giving Him permission to defy the evil that is flexing and fuming.

Good can come of this. Let God’s name be honored, His power evident to comfort and bring hope for something much better than this. And let it happen through my life, on our Middle East University campus, for dear Lebanon, and into the “uttermost parts” of our reeling world.

Angels Protected My Little Boy in Lebanon “I barely finished speaking when a second explosion caused the double-glassed door to shatter and crash down on James.”

Argentine Missionary Shares Faith on National TV After Beirut Blast Carlos Biaggi says the opportunity to talk about Jesus is an answer to prayer.