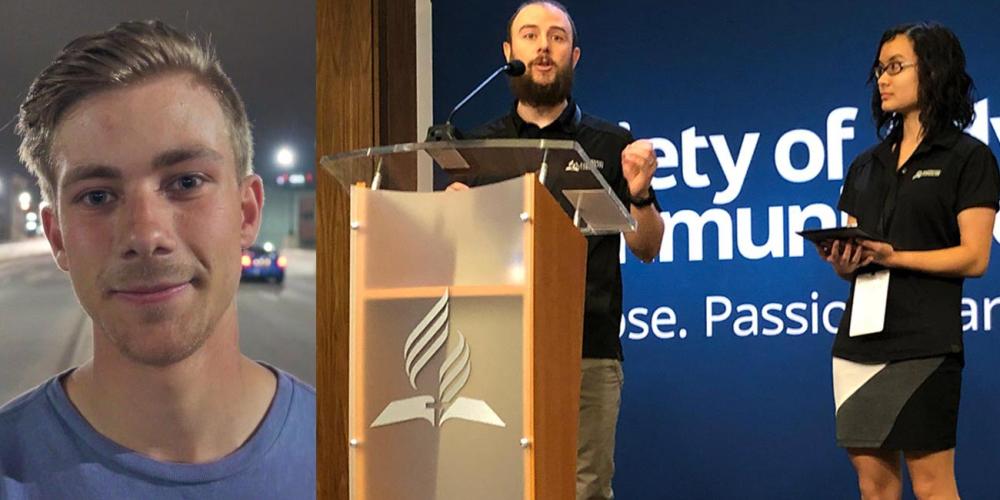 Students from the United States, the United Kingdom, and Australia among the top winners of the “My Story, My Mission” student film contest sponsored by Adventist Mission

Caleb Haakenson, a student from Union College in the United States, placed first, winning the grand prize film trip. Next year, he will travel with Adventist Mission producers and develop his filmmaking skills by helping capture a mission story for Mission Spotlight on location! He also received the Judges’ Choice Award, winning a Ricoh Theta SC Spherical camera.

Ryan Daly, a student from the University of East London in the United Kingdom, placed second, winning his choice of a GoPro Hero6 camera or a DJI Spark drone. Jack Wright, a student from Jubilee Christian College in Australia, was the 3rd-place winner. He received a DJI Osmo Mobile Gimbal Stabilizer.

Five films were awarded honorable mention and each will receive a US$25 cash prize. Honorable mentions went to Jay Genon, Philippines; Ellen Lopes, Brazil; Charles Diong, Thailand; Luis Jonathan Fernandez, Brazil; and Samuel Vidacak, Australia. All winning films will be given special recognition and will be screened online, on social media, and/or other venues.

Adventist Mission announced the winners on Friday, October 19, at the Society of Adventist Communicators conference in Columbia, Maryland, USA.

Adventist Mission believes that films showing how God is changing lives through mission work are important tools for evangelism and building faith. That’s why Adventist Mission produces the Mission Spotlight and Mission 360˚ TV short films that churches across the world watch each Sabbath and throughout the week. The goal for the contest was to inspire mission-minded young filmmakers to share their own mission stories or show how mission is alive today.

The “My Story, My Mission” film contest was announced in April at the Sonscreen film festival in Columbia, Maryland. Students from all over the world were encouraged to submit inspiring short films. Entries were accepted until September 2.

Films were scored by a judging panel, comprised of Arjay Arellano, Senior Communication Specialist at ADRA International; Fylvia Kline, manager at VividFaith; Laurie Falvo, editor of Mission 360˚ magazine at Adventist Mission; Flávio Ferraz, Jr., producer at Missão 360˚ TV at Novo Tempo; and Ricky Oliveras, producer of Mission Spotlight at Adventist Mission. The finalists were put online at AdventistMission.org/filmcontest, where the public voted for their favorite films. Voting closed on October 17.

Mission Spotlight films can be found at MissionSpotlight.org. Those interested in seeing the film created with the help of the 1st-place winner can sign up for the Mission Spotlight email newsletter to receive quarterly alerts when new films are posted online.

Ready to Follow A Global Mission pioneer feel compelled to plant churches in Myanmar, mission work in India and the Philippines, and the sights and sounds of Buenos Aires, Argentina.

Open for All An Urban Center of Influence plants a new church in this busy part of Buenos Aires, Argentina.