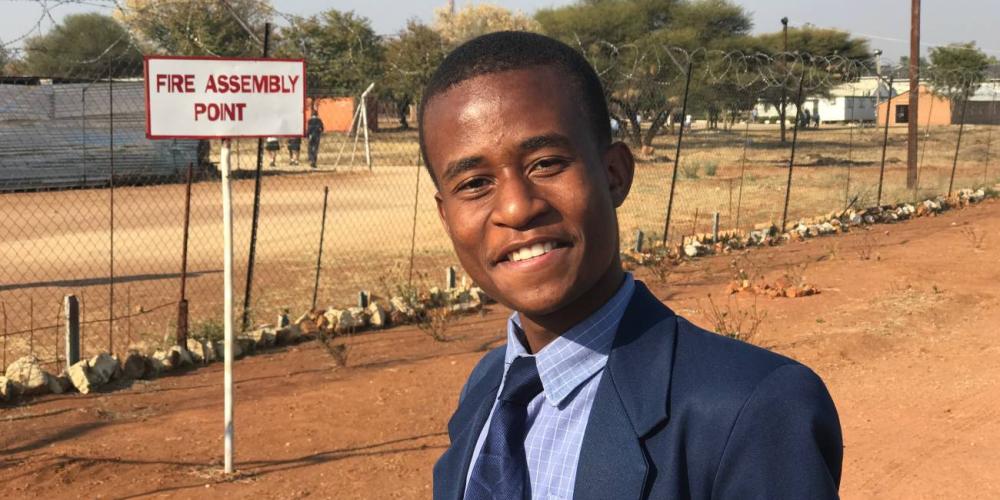 Unbelieving Teen Sees Own Baptism in a Dream

Everything that happened that afternoon was in the dream.

Unabatsho Sertse, known to his friends as Una, had the strangest dream the night before he went to pick up his school uniform at his new school in Botswana.

Sixteen-year-old Una dreamed that it was afternoon, and he was chatting with someone outdoors. Then he entered a building and was baptized.

Una awoke with a start. He didn’t go to church, and he couldn’t understand why he was being baptized.

Finally, he dismissed the dream.

“I put it off as just another dream that a kid could have,” he said.

For four years, Una had lived with his parents and two sisters in Zimbabwe, and he had attended a different school every year. He missed his homeland, and he jumped at the opportunity to return to Botswana when his parents asked whether he would like to study at Eastern Gate Academy, a boarding school in Botswana’s second-largest city, Francistown. His family owned a house near Francistown, but the boy would stay in the school dormitory.

The day after the dream, Una and his parents went to Eastern Gate Academy to receive his uniform. Later, he moved into the dormitory, and his parents returned to Zimbabwe, where his father worked in the capital, Harare, for an international law enforcement agency.

Una didn’t realize at first that he was attending a Seventh-day Adventist school, and he was surprised to be called to morning worship. He disliked getting up early at first, but the worship talks awakened in him an interest in Jesus. His love for Jesus grew throughout the school year.

One Sabbath, Una went forward in church when the academy pastor asked whether anyone wished to be baptized. He completed baptismal class and was told that he and several dozen other people would be baptized on a Sabbath afternoon.

On the day of the baptism, Una attended church as usual and ate lunch in the school’s dining hall. Afterward, he went outdoors and spoke with a female student near one of the dormitories. As they spoke, he sensed something familiar about the scenery.

“But I didn’t understand what it was, and I pushed aside the thought,” he said.

A short time later, the students boarded buses to ride to another church for the baptism ceremony.

“When we got to the church, the entrance to the building looked familiar, as if I had seen it somewhere before,” Una said. “But I had never been there before.”

He wondered why he had that feeling and asked a friend if he felt a similar sense of déjà vu. His friend looked at him quizzically and shook his head.

The baptismal candidates were instructed to go to the back of the church to change into baptismal robes. As Una descended into the baptismal tank, he thought that the steps looked familiar. A moment later, the pastor was praying, and he was thrust under the water.

As Una emerged, water running down his face, he suddenly remembered his dream. Everything that had happened that afternoon had been in the dream. He couldn’t believe it.

“God works in mysterious ways, and I was fortunate to see my baptism in advance,” Una said. “After that, my faith increased, and I began to take the Bible even more seriously.”

Una later told the other students about the dream. The girl who had played a role in the dream was astonished.

“You should be thankful for what God can give us,” she said.

Una’s parents also were surprised. The dream has allowed Una to share with them what the school is teaching him about Jesus.

Una is now 18 and encouraging his parents to go to church every Sabbath. After high school, he hopes to study mobile computing. But whatever he ends up doing, he is determined to put Jesus first.

“The dream showed me the path that was to choose in life,” he said. “It showed me that I should stick to that one path” — Christ.

Unabatsho Sertse showing the spot at Eastern Gate Academy that he saw in his dream. (Andrew McChesney / Adventist Mission)

Eastern Gate Academy shares a campus with Eastern Gate Primary School, a Thirteenth Sabbath-funded elementary school that opened in January 2017. Thank you for your mission offerings that made the school possible.