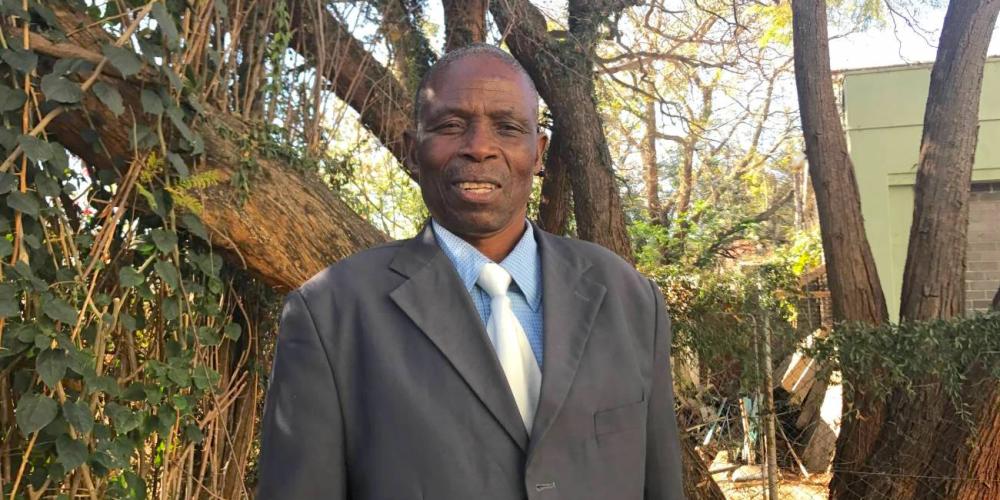 A cow also plays a key role in the conversion of this Global Mission pioneer.

Mordecai Msimanga turned to God and became a missionary to his fellow Zimbabweans after accidentally hearing a sermon from the Song of Solomon.

A young Mordecai was baptized into the Seventh-day Adventist Church in Rhodesia in 1963 and moved to the country’s second-largest city, Bulawayo, to find work. He stopped praying and reading the Bible.

“I became a stubborn person who ran away from the church for 22 years,” he said in an interview.

During those years, he became a soldier and fought in Zimbabwe’s war for independence. After independence in 1980, he lived for himself and refused to consider God.

One day, he decided to buy a cow. The seller, however, was attending an outdoor camp meeting, so Mordecai went to look for him. Arriving at the field where the camp meeting was being held, he learned that the seller had left for a short time, so he sat down on the ground to wait.

The preacher was reading from the Old Testament book of Song of Solomon, and his words cut Mordecai to the heart.

“Take us the foxes, the little foxes, that spoil the vines: for our vines have tender grapes,” the preacher read from Song of Solomon 2:15 (KJV).

He said the foxes were gobbling up the Israelites’ crops and God was permitting this because the Israelites were stubbornly refusing to repent and obey Him.

As Mordecai listened, he realized that he also faced destruction if he stubbornly refused to repent and obey God.

“I was the same as the Israelites who ran away from God,” he said.

He remembered the many times that God had protected him in the past. He had gone to war and returned without a single injury. His sins seemed enormous. Mordecai began to sob. He couldn’t contain his grief as the tears rolled down his cheeks, and his weeping turned into loud cries of anguish.

“I understood that I was a sinner in front of my God,” he said later.

Mordecai stood up and, crying loudly, walked up to the stage. The preacher halted his sermon and immediately made an altar call. Dozens of people, touched by the tears of the hardened military veteran, came forward to give their hearts to Jesus.

Mordecai was rebaptized in 1987 and promised to serve God for the rest of his life.

“I decided that I must work for my God for these years before I die,” he said.

Mordecai, 68, has worked since 2006 as a Global Mission pioneer, a missionary who spreads the gospel among his own people in unreached areas. He has cast out evil spirits and converted an entire church of 16 people, including the pastor. Scores of people have been baptized through his efforts.

Mordecai praised God that his plan to buy a cow collapsed at the camp meeting.

“The Spirit of God led me to sit and listen, and I thank God for that,” he said.

Read about Mordecai Msimanga’s work as a Global Mission pioneer