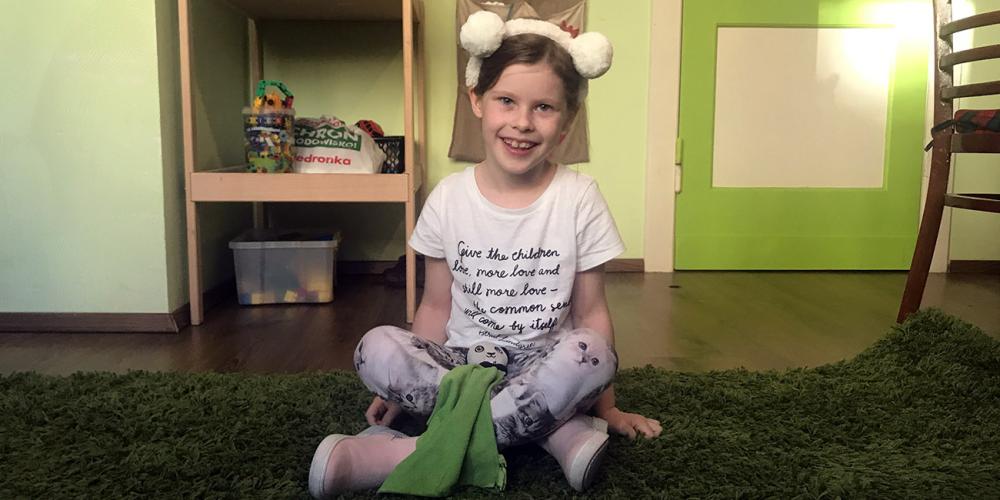 Ready to Give Anything for a Panda

When little Zofia returned home from her walk, Theodore was nowhere to be found.


Zofia Kluska received Theodore when she was a tiny 3-month-old baby.

Father brought Theodore from the store and placed the cuddly black-and-white panda with a small green blanket on Zofia’s bed in Gdynia, Poland.

It was love at first touch, and Zofia formed a close relationship with her new friend. Wherever she went, Theodore went, too. When she went for a walk, Theodore came along. When she fell asleep at night, Theodore snuggled at her side.

Theodore became an important member of the family. He traveled across the country for visits to Grandfather and Grandmother. He attended church concerts and camp meetings. He posed in all the family photos.

But one awful day, he disappeared.

Zofia was 3, and she went for a long walk with the babysitter. They played on the playground, swam in the Baltic Sea, and walked up and down the beach. When they returned home, Theodore was nowhere to be found.

At first, Father and Mother thought Theodore hadn’t gone on the walk with Zofia. They searched the house. Under beds and in cupboards. In the bathroom and on the living room sofa. No Theodore.

Mother placed Zofia in the stroller, and she and Father retraced the path that Zofia and the babysitter had taken earlier. They went to the playground. They followed the path to the Baltic Sea. They looked on the sandy beach. No Theodore.

Zofia felt certain that she had left Theodore at the playground, so Father and Mother searched the playground again. No Theodore.

Father and Mother were worried about putting Zofia to bed that night. She had slept with Theodore every night since she was 3 months old.

Before bedtime, Zofia prayed for Theodore. Then she closed her eyes in bed. She didn’t cry, but it was hard to sleep. She tossed and turned for a long time before finally falling asleep.

In the morning, Mother made posters with Theodore’s photo. She wrote with a marker, “Lost! A cuddly toy — a little panda with a green blanket — was lost somewhere around here. He is very special for our little girl and our family. Reward.”

Mother placed the posters at the playground, on the path to the Baltic Sea, and on the beach. Maybe someone would find Theodore and call. Theodore was not found.

Father went to the toy store to look for Theodore. He couldn’t find the panda with a green blanket, but he did see a nice orange lion. At home, Zofia wasn’t very excited to receive the lion.

Father turned on his computer and looked for Theodore on Ebay. Nothing.

Father wondered what else he could do. He was ready to do anything to find Theodore. He wanted Zofia to be happy.

He decided to try one last thing. He wrote an email to the Swedish company’s headquarters in Stockholm. In the letter, he explained that Zofia had lost Theodore and that Theodore was an important member of the family. He asked whether the company had seen Theodore in Sweden.

The next day, a company manager wrote back. He wrote that he also was a father and he felt very sad that Theodore had gone missing.

“We have a special warehouse where we keep one sample of every item that we have ever designed,” he said. “Theodore is there. I will send him to you.”

“Look who has returned home from a very long trip,” he said.

Zofia was so happy!

Father (Daniel Kluska, communication director of the Seventh-day Adventist Church in Poland) and Mother (Agnieszka Kasprowicz-Kluska) never decided on what reward to offer if someone found Theodore.

“We were ready to give anything and everything to get Theodore,” Father said.

It’s the same in the parable of the Pearl of Great Price in Matthew 13:45-46, where Jesus said, “Again, the kingdom of heaven is like a merchant seeking beautiful pearls, who, when he had found one pearl of great price, went and sold all that he had and bought it.” Jesus calls on people to be ready to give anything and everything to receive Him, the Pearl of Great Price.

Today, Zofia is 8, and she takes Theodore everywhere. Father and Mother keep a close eye on Theodore and never let him out of their sight. They don’t want to lose him again.

Thank you for your 2017 Thirteenth Sabbath Offering that is helping Hope Channel open a studio in Poland so people can learn about Jesus’ soon coming in the Polish language on television and the Internet.

"A Ultima Mensagem" by Sollanza A song in Portuguese with images of mission from around the world!