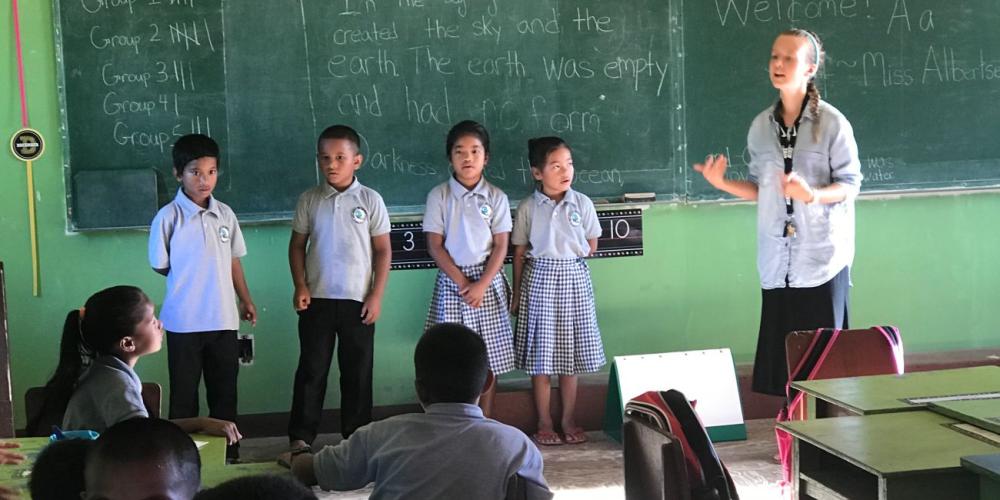 A punching, screaming child proves no match for a missionary’s prayer list.


Little Lomon didn’t wear his school uniform on his first day of classes at Ebeye Seventh-day Adventist School in the Marshall Islands.

On the second day, the 5-year-old boy arrived for kindergarten wearing the required black slacks and gray polo shirt. But he struggled to sit still and listen to the teacher, Elisa Albertsen, a young missionary from the U.S. state of Alaska. He wanted to be out in the street, playing with friends who weren’t in school yet.

Then Lomon began to pinch and punch the other children.

Elisa gave him a time out, moving him away from the other children until he calmed down. But Lomon started howling like a wolf. “Ooooooo!” he howled. “Oo-oo-oo-ooooooo!”

Elisa took Lomon to the principal, but his behavior remained the same. Complicating matters, many of the other 19 children in the kindergarten class also were having difficulty adapting to school. They bit and scratched one another and the teacher. One day, all 20 children made a dash for the classroom’s glassless windows in an attempt to jump out and flee. Elisa somehow managed to restrain them.

But Lomon represented the biggest challenge.

Elisa finally spoke with Lomon’s aunt. She learned that the boy’s young mother and alcoholic father lived on another island. He was staying with his aunt and uncle on Ebeye, an island where more than 12,000 people live on just 80 acres (32 hectares) of land.

Elisa’s heart went out to Lomon.

“He didn’t have the best home life, and it was his first time in school,” she said in an interview. “I realized that he needed a lot of love and attention.”

Then Elisa noticed that Lomon was coming to school with bruises on his body. His cousin showed up with a black eye. Elisa realized that something was going on in their home, and she spoke with the principal. But there was little that they could do in a culture where guardians and children often dismiss bruises as accidents and child protective services are nonexistent.

Elisa decided to stop telling Lomon’s family about his misbehavior and to pray.

“I went home one day in tears and asked God, ‘What am I supposed to do with him? I want him to be successful this school year,’” she said.

She felt that a spiritual battle was raging in her classroom even though the children were only preschoolers.

“This is the age when they start to learn good and bad habits,” she said. “This is where Satan wants to get kids at a young age so he can disrupt their relationship with Jesus.”

Elisa felt impressed to pray daily — not only for Lomon and her difficulties in the classroom, but also for each student, each student’s family, and for God to fill the classroom atmosphere with His love. She compiled a list of names and prayed for each student and family member by name every morning and evening.

“I was very determined that my classroom was going to change,” Elisa said.

At school, Elisa kept Lomon after class as punishment when he was disobedient, and she prayed with him every time. Lomon didn’t know how to pray, so she taught him how.

“Dear Heavenly Father,” he said, repeating after Elisa. “Thank you for this day. Thank you for my food. I am sorry for disrupting class today and hurting a classmate. Please forgive me and help me to try harder to listen and be kind tomorrow.”

One day while praying, the boy said, “Miss, Miss, can I please push in all the chairs?” He wanted to help his teacher for the first time!

Within two weeks of starting the prayer list, Elisa noticed a major difference in the classroom.

Lomon began to clean up when other children made a mess. He tried to stop arguments by standing between the feuding children and asking them to hug.

The other children also started to act kinder. They learned how to say “sorry” and “please forgive me.” Those who were wronged learned to reply, “I forgive you,” and offer a hug. God’s love filled the classroom, Elisa said.

Teachers aren’t supposed to have favorites, but Elisa said Lomon became especially dear to her.

“He was just a hurting child who wanted to be loved and to be in a stable environment,” said Elisa, 21.

Read about Elisa Albertsen and her joy journal

Part of the Thirteenth Sabbath Offering in second quarter 2018 will help Ebeye Seventh-day Adventist School make much-needed repairs to its classrooms so it can continue to teach children like Lomon about the Heavenly Father. Thank you for your mission offerings.

The boy’s name has been changed. “Lomon” is a boy’s name meaning “rough waters” in the Marshallese language.

​Children Quit Japanese Mission School Because of Prayer But the Global Mission pioneer’s persistent prayers bring them back.

Feeling Sad About Popcorn and Grandparents A little girl learns a big lesson about prayer in Botswana.