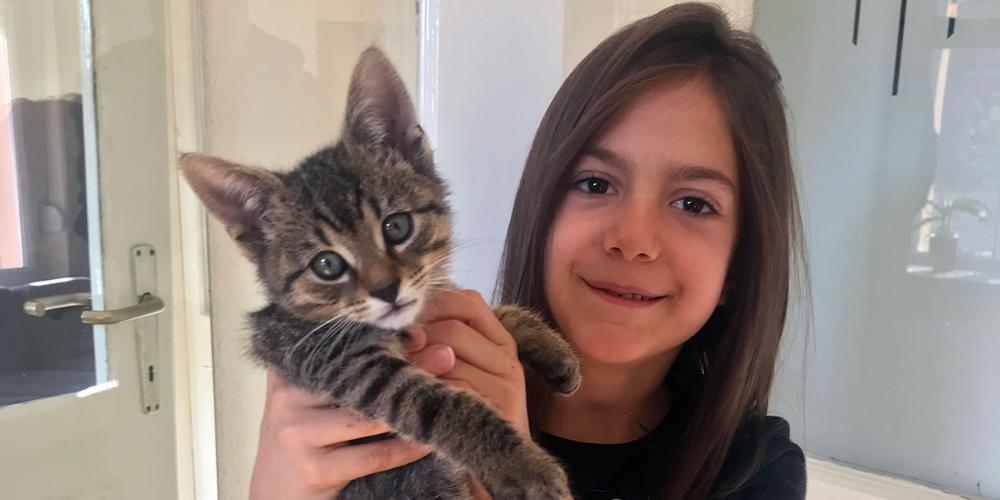 Father entered the bathroom just in time to see the kitten swallow the poisonous orange ball in Serbia.

Ema Macura has loved animals for as long as she can remember.

When she was 3, she begged for a horse. Mother explained that a horse was too big to keep in their city apartment in Serbia.

So, Ema asked a smaller pet.

Father didn’t think a dog was a good idea.

“Our house is too small for a dog, and we don’t have a yard,” he said. “Animals need a bigger place with a yard. Jesus didn’t make them to live in a small, closed place like an apartment.”

Ema didn’t give up.

Father and Mother said she could have a pet if they moved to a house with a yard.

Ema patiently waited to move. Father worked as a pastor, and pastors move every few years in Serbia.

When Ema was 7, the family finally moved, and the new house had a yard!

Then a woman at church offered Ema a kitten. Her cat had just given birth to a litter of kittens.

Ema was thrilled and spoke with Mother.

“You promised that we could have a pet when we moved to a house with a yard,” she said. “Pleeeeease.”

Ema chose a handsome gray-striped kitten and decided to name him Tom.

Tom suddenly found the bathroom to be a particularly interesting place. When someone went in or out, he tried to slip through the open bathroom door.

One Sunday, Ema and the family loaded the car for a day-trip to Grandfather and Grandmother in Croatia. Tom could not go with them.

As Mother finished packing, she took some laundry out of the bathroom and forgot to close the door. Tom immediately realized that no one was watching and dashed into the bathroom. He found an orange ball and ate it.

Father entered the bathroom just in time to see Tom swallow the last of the orange ball.

Father tried to remove the poison from Tom’s mouth, but it was too late.

Ema began to cry. Tom had eaten a very large amount of poison, and he was a tiny kitten, only two months old. Ema cried so hard that she couldn’t speak. Father and Mother tried to comfort her.

“Maybe God will do a miracle,” Father said.

The family closed their eyes in the hall outside the bathroom door.

“God, please save Tom so he doesn’t die,” Father said.

Nothing more could be done. No veterinarian was available, and another family was waiting to join them on the trip. Father shut Tom in a room with plenty of food and water, and the family left for Grandfather and Grandmother.

The family prayed many times for Tom as they traveled. They also prayed at the grandparents’ house. At mealtime, Ema prayed, “Thank you, Jesus, for the food, and please keep Tom alive and help him to get well.”

Grandmother told Ema not to worry.

“Cats vomit when they eat something bad,” she said. “Maybe Tom will throw up the poison.”

Ema hoped that Tom would vomit.

When the family arrived back home that evening, Mother suggested that it would best if she entered the house first. As soon as she opened the door, Tom ran out.

Father and Mother also were happy. Luka offered a prayer of thanksgiving.

“Thank you, God, for saving Tom,” he said. “We have seen that Your power is great.”

Mother later found that Tom had vomited the poison in the room.

“God is great, and He hears prayers from us young children,” Ema said. “Thank you, Jesus, for protecting both us and our pets.”

Ema’s father, Aleksandar Macura, is pastor of New Belgrade Seventh-day Adventist Church, which will receive part of the Thirteenth Sabbath Offering in second quarter 2020 to obtain its own church building. Right now, the church shares a building with another Adventist congregation in a town near New Belgrade.

​New Heart for Little Alex The devil tried to snatch away Alex, but Jesus gave him a new heart.

Unfairly Accused of Being a Christian Musa never wanted to become a Christian, but then his family tried to kill him because they thought he had converted.