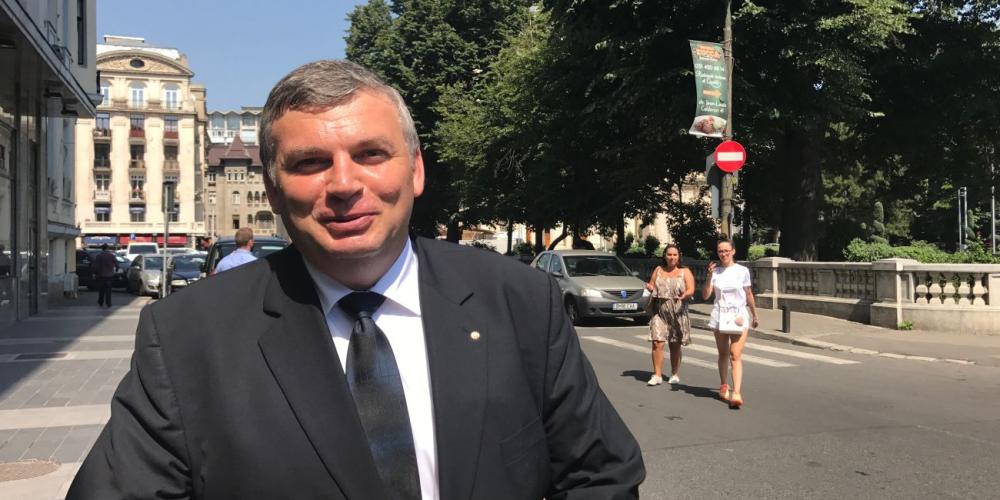 Prayer Brings Church Back to Life in Romania

The Bucharest international church had only three members. Now up to 50 people attend every Sabbath.

The new pastor was shocked when he showed up at the Bucharest International Seventh-day Adventist Church — the only English-speaking church in Romania’s capital — and found only three people present.

All three were Romanians.

“They pretty much told me that was it, that was the whole group,” said the pastor, Benjamin Stan.

Three weeks later, Benjamin learned that one of the three people, a 21-year-old woman, no longer planned to attend. The woman’s mother came to the church on Sabbath to break the news that here daughter, after being part of the group for two years, had decided to move on.

“The mother tried to tell me in a delicate way that her daughter was thinking about going to another church because she wanted a church that had more young people in it,” Benjamin said. “You know, young people need young people to grow.”

As the pastor listened to the mother speak, he wondered why God had led him to an apparently dead church. He prayed, “Why am I here? Why did You give me this calling?”

At that moment, a Romanian woman who attended church regularly but wasn’t a member arrived with an elderly couple. She had met the couple — a retired Adventist pastor who was touring Romania with his wife — on the way to church and learned that they were looking for her church.

“It was then that I understood that there was a need for the international church,” Benjamin said. “We have tourists who come to Romania and need a place to worship.”

Benjamin kept praying about the church. A couple weeks later, he turned up at the church to find a man dressed in a suit and tie waiting outside.

“Can I help you?” Benjamin asked.

“Yes, I am looking for the Seventh-day Adventist church,” the stranger replied.

Once the small church group gathered to worship, Benjamin asked the man to introduce himself. The man said he lived with his wife and two children in Poland but worked in Romania. He belonged to a Sunday church but, after studying the Bible, was looking for a church that worshipped on Saturday.

“It was then that I realized that there are foreigners who work in Romania but don’t speak Romanian,” Benjamin said. “This church would be good for them.”

Soon after that, the slow summer months arrived, and the church’s two members and the other attendees left Bucharest for vacation. The church closed until the fall. When it reopened, Benjamin suggested scheduling Sabbath School and the divine worship service on Sabbath mornings. Until then, the church had offered only the divine worship service from 6 p.m. to 7 p.m. every Sabbath.

The two members voiced reluctance about the new format. They went to Romanian churches in the morning and didn’t want to lose that fellowship. But Benjamin was insistent.

Benjamin recruited a 17-year-old treasurer and a 19-year-old Sabbath School superintendent. He found a man of about 30 to serve as elder. He advertised the new morning worship schedule on social media.

“You should have seen the expression on the faces of the two members when they arrived,” Benjamin said. “I could see their big eyes. They were surprised when they saw so many people — especially so many young people — in the church.”

The Polish visitor, who had been taking Bible studies with Benjamin, was baptized on a Sabbath morning several weeks later.

Today, Benjamin has no doubt that the church, started by pastor Adrian Bocaneanu in 2010, serves an important role in Bucharest. It now has 26 members, and weekly attendance ranges from 30 to 50 people, including tourists, foreign workers, and international students. A couple times attendance reached 60.

“With the exception of two Sabbaths, we have had at least one new visitor at the church every Sabbath,” said Benjamin, 43, who also serves as associate youth director for the Adventist Church in Romania, and oversees the country’s Pathfinder and Adventurer clubs.

The church was officially recognized by the Romanian Union Conference as a church in March 2016, 10 months after Benjamin began praying.

What happened to those three people who attended the church when he arrived that first Sabbath?

“The three members still go to the church, and they are very much involved,” Benjamin said. “The young woman who left is now one of the elders.”

Underground Seminary Graduates First Students “It’s a miracle that this school has been open for 3 ½ years,” says the seminary’s director.