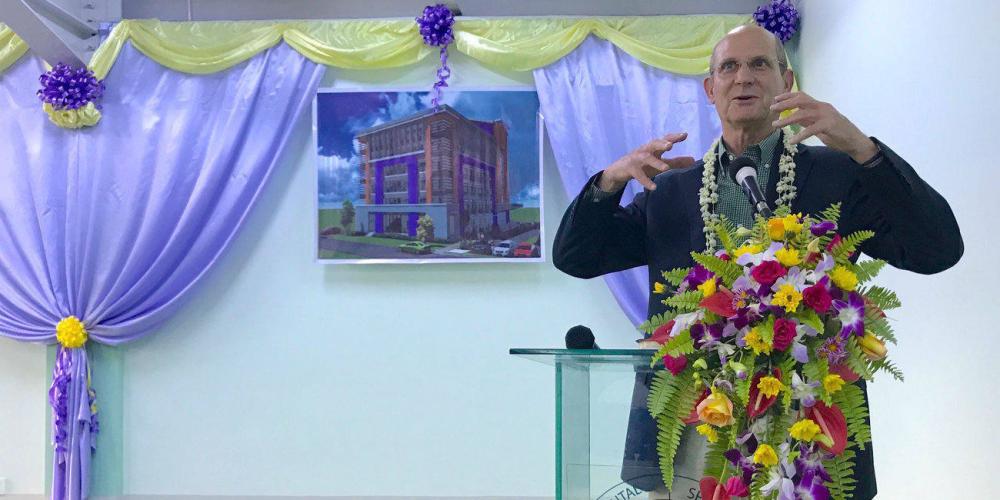 Local church leaders unsuccessfully tried to use their connections to build the school for three years. Then they prayed.


Connections are essential in Myanmar.

It’s not who you are or what you have. It’s who you know that counts in this Southeast Asian country.

But connections didn’t seem to be working for local Seventh-day Adventist leaders who needed authorization to build a larger school in Myanmar’s capital, Yangon. Enrollment had reached 650 children in two small buildings used since 1975, and teachers had no choice but to turn away new students.

Church leaders approached Yangon city authorities for permission to construct a brand-new building, but no one seemed to want to sign off on the paperwork. The leaders reached out to their personal acquaintances in the city government for help, but again nothing happened.

In the United States, the General Conference, the administrative body of the Adventist world church, recognized the need for the new school building and approved a request from the Southern Asia-Pacific Division, whose territory includes Myanmar, to allocate part of a 2012 Thirteenth Sabbath Offering for its construction.

The money was collected, but local church leaders still couldn’t find connections in the city government to approve the project. Three years passed.

Then new church leadership was chosen during regular elections. The new leaders didn’t have any connections in the city government, and they threw up their hands in dismay. The situation seemed impossible.

“Yes, you don’t have the connections and don’t know the right people,” he said. “But we have God. If we ask Him, He will get us through.”

He suggested that the leaders pray and file a new request for a city building permit.

The leaders prayed and went to the city office, where a woman greeted them at the front desk. Her face lit up when she heard that they represented Yangon Adventist Seminary, as the grade 1-12 school is known.

“You’re from that school!” she exclaimed. “I studied at that school. I like their values and their education so much that two of my children are studying there right now.”

Learning about the school construction plans, she immediately declared that she would make sure that all necessary documents were approved.

And she did. In a short time, construction started on the school building.

The new, six-story school building was dedicated to God at a Nov. 9 ceremony attended by Adventist world church president Ted N.C. Wilson and dozens of teachers, students, and church leaders.

Wilson urged the teachers to always keep Jesus at the heart of education and described the school was an important “center of influence” in Yangon, a bustling city of 5 million people.

School treasurer Wesley Doe expressed gratitude to church members for giving to the school on the Thirteenth Sabbath of second quarter 2012.

“I would like to thank our brothers and sisters from around the word for their Thirteenth Sabbath Offering,” he said.

The Thirteenth Sabbath Offering provided $300,000 toward the building’s $1.3 million cost. Another $425,000 came from private donors and a land sale in the Myanmar Union Mission, while $400,000 came from the General Conference’s unusual opportunities fund, and $200,000 came from the Southern Asia-Pacific Division. ADRA gave $50,000.

Construction of the school building is expected to be finished by year’s end, said Max W. Langi, treasurer of the Southern Asia-Pacific Division.

The school aims to be a beacon of light to the community, said principal Saw Lay Wah. The new building will accommodate 800 children, and even more students can attend if the older buildings continue to be used, he said. The school currently has 648 students, 28 percent of whom come from Adventist homes.

Between speeches and prayers at the dedication ceremony, students performed a traditional dance, played in an all-violin orchestra, and sang the school song, composed by the school principal. Teachers served refreshments of sticky rice cakes, durian ice cream, and fresh durian and other tropical fruit.

Samuel Saw, the division president, who attended the ceremony, called the construction of the school building an absolute miracle.

“We may not have connections with the authorities, but we have the most important connection of all — with God,” he said in an interview.

“Ellen White says, ‘God will do the work if we will furnish Him the instruments,’” he said, citing a passage from the book “Testimonies for the Church Vol. 9,” p. 107. “When we trust in Him, have faith in Him, and seek Him, He will guide us through. God is always here because this is His work.”

​Vegetables Only, Please Mother was shocked when her 6-year-old daughter refused the beef stew.

Mission to Refugees and Little Bikers A unique center of influence in Brazil, a couple serving the Lord in retirement in the Philippines, and refugee ministries in Atlanta. Come with us to explore mission around the world! A Missionary Nucleus in the Amazon In the heart of the Amazon jungle, a school pulses the message of Christ. Meet the IAAI, Adventist Agro Industrial Institute. Let's see how the 13th Sabbath Offering helped this school and its mission. God's Surprise After the tragedy of wildfires in California, God used a llama to bring joy and healing to the community! Serving Around the World With Food Providing Rice during the pandemic in the Philippines, community service in London, England, and feeding the needy in Scotland. Learn more about how mission is impacting people's lives around the world! A Legacy of Generosity On the island of Romblon in the Philippines, Ike and Gerbie are retirees who devote their time to developing three hectares of land for the Lord’s work. Mission Unusual Tokyo A Pioneer Life for Me A Global Mission pioneer in Botswana tells his story.