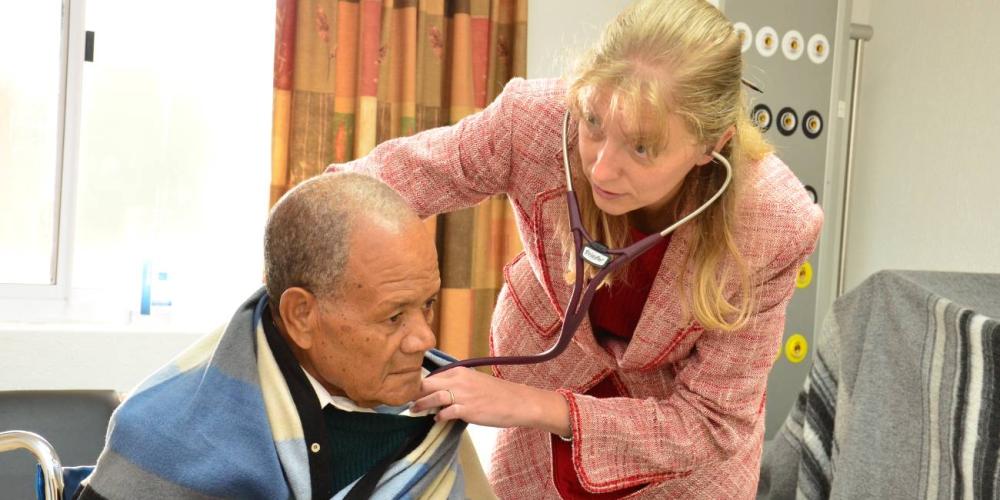 A 30-year-old woman was admitted to Blantyre Adventist Hospital in Malawi with a bad case of pneumonia.

When she didn’t get better with antibiotics, missionary physician Tiffany Priester ordered an HIV test. The results came back positive. She had full-blown AIDS.

The woman turned out to have several forms of pneumonia as well as tuberculosis. Priester explained to the woman’s family that it usually takes three weeks to treat pneumonia and there was a 50 percent chance that she would make it. But then the woman began to suffer kidneys problems, and her chances of survival plummeted to 10 percent.

“I told her family that there wasn’t much hope,” Priester said. “The family said, ‘We believe in God. We believe in miracles. Let’s pray.’ So, we prayed.”

Surrounded by the family members, Priester prayed to the Lord for a cure in the hospital’s hallway. Then she put the patient on a ventilation machine.

The woman’s kidneys shut down after 24 hours. All hope seemed lost. But then she began to recover. A few weeks later, she walked out of the hospital on her own.

“Medicine has its limits,” Priester said, speaking Monday to church employees at a morning worship at the General Conference’s headquarters in Silver Spring, Maryland. “The hospital does what it can do, and the Lord does the rest.”

Priester, a U.S. cardiologist, worked for five years in Blantyre, the second-largest city in Malawi with a population of about 1 million. Blantyre Adventist hospital — which employs six missionary doctors, two missionary dentists, and seven Malawian doctors — did not have a cardiologist for the decade before Priester arrived in 2011, a common problem in a country with only one medical doctor for every 88,000 people.

Malawi has a population of 18 million, including about 483,000 Seventh-day Adventists.

Priester, who relocated to Loma Linda, California, last year, still returns to Malawi every six months to treat patients, and she plans to continue the arrangement until the hospital finds a new cardiologist. She asked church employees on Monday whether they could recommend a good doctor.

Priester said her motivation for mission service is John 13:35, where Jesus says, “By this all will know that you are My disciples, if you have love for one another” (NKJV).

Two of the best ways to show love are to pay attention to the small things and to encourage people regularly, she said.

One day, a Malawian woman came to Priester with an unusual case. She awoke every night around midnight with her heart pounding furiously.

Priester ran a series of tests that came back normal. Any other doctor might write off the heart palpitations as the result of bad dreams.

“But that day I think the Holy Spirit prompted me to ask more,” Priester said.

As she spoke with the patient, Priester learned that some time earlier the woman had met a self-professed prophet who had warned her that she would be raped at midnight. The heart palpitations had started after that conversation.

Priester asked the woman whether she thought that the man really was a prophet. She asked whether God was protecting her and whether He was stronger than the self-professed prophet.

“Put your trust in God,” she told the woman.

The woman replied, “You are the first doctor to tell me that God is strong.”

This is what it means to “love one another,” Priester said. It means making an extra effort to find ways to provide both physical and emotional healing, she said.

“Sometimes it is the small things that set us apart from everyone else,” she said.

Every time Priester returns to Malawi, a successful businessman is waiting to greet her. The two first met three years ago, when the businessman was obese, diabetic, and the survivor of several heart attacks. He could not even walk down the hospital hallway to reach her office.

Rather than simply offer medical treatment, Priester decided to teach him about the biblical guidelines of good health.

“The part that I think shows our love is not just to say, ‘Take these pills,’ but to share the Adventist health message,” she said.

“He was able to walk as far as he wanted. Everything improved,” she said.

Christians show love when they take the time week after week to encourage people like this businessman, she said.

Priester most recently saw the businessman during a recent visit to Malawi. Now 65, he remains in good health.

Gratitude in the Waiting Room

Not all stories have happy endings. Priester told of a grandmother came for treatment at the age of 87, which is quite old in a country with an average life expectancy of 55 years. Little could be done but to make the woman comfortable as she prepared to die. Priester met with her and her family every month until she died.

Two weeks after the funeral, the surviving family members showed up in the hospital waiting room. Priester recognized them but was puzzled because they were not on her list of patients. When she had a free moment, she asked what they needed.

“We just wanted to come to see you as a family to thank you,” one family member said. “Our family just wants to say we appreciate this kind of healthcare in our country.”

Priester has heard many similar words of gratitude. The 30-year-old woman with pneumonia, for example, returned two weeks after her release from the hospital with flowers and a big cake.

“When people see the love that you provide for them, they really notice,” Priester said. “We go out as medical missionaries and save lives here and there. But what really matters in the long run is John 13:35, ‘By this all will know that you are My disciples, if you have love for one another.’ Love really matters.”

April 8 - 2 By 2 Sometimes, strength comes in numbers. In Nigeria, 4 Global Mission pioneers band together to reach their city.

How to Start a Missionary Movement Did you know that the Seventh-day Adventist Church has a strategic plan for the next five years? The plan is called I Will Go and it continues the Church’s mission to Reach the World. Adventists around the world are invited to participate and take the good news of the gospel to the ends of the earth. One Year in Mission in Argentina One Year in Mission volunteer serves at a center of influence in Lujan, Argentina. Among 9 other volunteers, Yanina feels privileged to realize her dream in mission work. From Bullied To Blessed Cartoon animated mission stories, the large city of Buenos Aires, Argentina, and an inspiring story from Uncle Homer. The Science Teacher A science major allows God to use him in a restricted country. As a Christian, he may not have been allowed to work there otherwise. From Dogs to Jesus Dogs and their owners in Quito, Ecuador are thrilled that One Year in Mission volunteers have become part of their community. The young volunteers came to share the love of Jesus—and surprisingly, this includes taking care of dogs. Mission Unusual Tokyo A Pioneer Life for Me A Global Mission pioneer in Botswana tells his story.