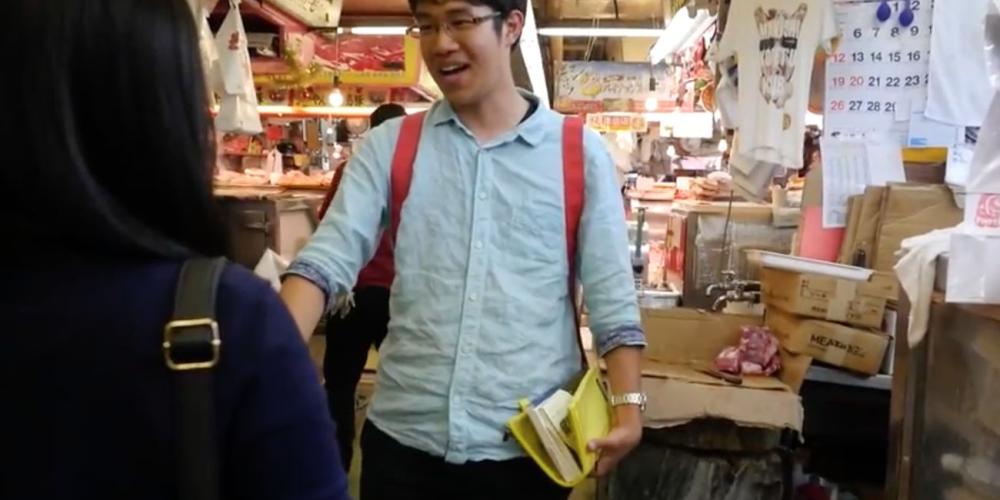 The Youth Rush literature evangelism program is taking off in Japan.

Thirteen high school and university students are bursting with stories about sharing their faith with a Buddhist monk, a Sunday church pastor, and others as Youth Rush literature evangelism takes off in Japan.

The students knocked on 18,938 doors and sold 2,032 books over three weeks on the Japanese island of Okinawa. Afterward, they excitedly spoke of miracles and a closer relationship with God.

“Before I joined Youth Rush, I did not really have an experience with God,” said Ikuya Chinami, a second-year university student.

“During Youth Rush, every day was filled with divine appointments,” he said, speaking on a YouTube video produced by the Adventist Church’s Japan Union Conference. “God works beyond our expectations. Sometimes people thanked us with tears for visiting them and praying with them.”

Youth Rush is a Seventh-day Adventist program that allows students to raise money for tuition while attempting to ground them in their faith. It originated in southern California and has spread across the United States. A third generation Japanese-American who participated in Youth Rush in California, Daniel Fukuda, brought the initiative to Japan last year.

“Ever since I experienced Youth Rush in California, I had this deep burden, desire, and vision that one day I wanted to start something like this in Japan,” Fukuda told Adventist Mission.

The chance came when the Japan Union Conference president asked him to bring Youth Rush to Japan and to work as assistant to the director of the union’s youth and literature ministries departments.

“I was excited and accepted the call,” Fukuda said.

Since July 2016, students have canvassed the country’s capital, Tokyo, two times and also gone door-to-door in Shizuoka, a southern city of 715,000 people.

The young people who took part in the most recent campaign on Okinawa last month enthusiastically shared their experiences on the YouTube video.

At a Buddhist Temple

Mayumi Kojima, a first-year university student, recalled struggling to sell books one day and the team leader telling her to go to a Buddhist temple. At the entrance of the temple stood a box labeled “The Great East Japan Earthquake Charity Offering.” Kojima immediately saw an opportunity. She was selling a book written by a Christian who had assisted in relief efforts after the 2011 earthquake off the Pacific coast of Tōhoku.

“I introduced the book to the chief monk, and he bought a copy,” Kojima said.

She noted that Jesus said in Mark 16:15, “Go into all the world and preach the gospel to every creature” (NKJV).

“God commands me to go everywhere, including Buddhist temples,” she said. “I didn’t think that I would sell the book at the temple.”

First-year university student Kurumi Ijiri said she showed her books to a Sunday church pastor. The pastor was not interested in those titles and asked whether she had any others. Ijiri cautiously pulled out a book titled, “No, Sabbath Is Saturday.”

“This is it!” the pastor exclaimed. “This is the book I want!”

He explained that he was having Bible studies with his church members, and one of them had asked why Seventh-day Adventists worship on Saturday. The pastor didn’t know and had begun to wonder about the correct day of worship.

The pastor paid Ijiri for the book and for a copy of “The Great Controversy” by Adventist Church cofounder Ellen White.

“A Sunday-keeping church pastor buying this book, ‘No, Sabbath is Saturday,’ was truly a miracle!” Ijiri said.

Japanese church leaders hope that the experience of Youth Rush will encourage young Adventists to remain faithful. Teenagers account for 30 percent to 40 percent of baptisms every year, but 40 percent to 50 percent of them leave the church by their mid-20s, said Yasuki Aoki, director of the youth and literature ministries departments of the Japan Union.

“Once they experience solid discipleship training and the joy of evangelism, they will not leave the church,” he said.

Three more Youth Rush campaigns are planned for three other Japanese cities in 2017, and church leaders intend to schedule at least five campaigns every year.

Chinami, the second-year university student, said he is convinced that literature evangelism works.

“Sometimes people are skeptical about literature evangelism work, but I know by experience that there are people waiting for our visits,” he said. “God is eager to work through us.”

Doug Batchelor Marvels at Gospel’s Reach in Papua New Guinea “I wasn’t prepared tor the impact that media have had,” the Adventist evangelist says.