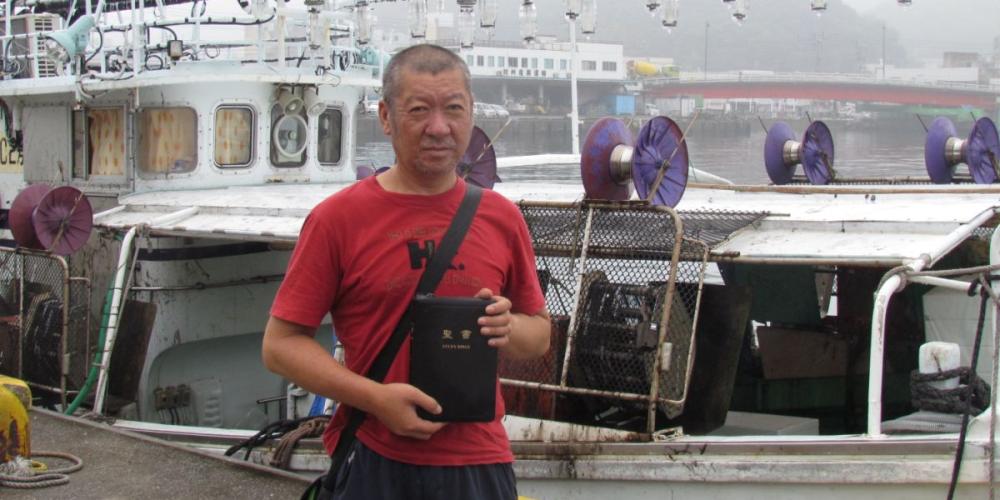 I didn’t have a cigarette for him, but I did have a tattered Adventist tract.


My heart swelled with joy as I saw Kojima Sadayuki, a 48-year-old fisherman, commit his life to Jesus through baptism in a beautiful valley on the remote Japanese island of Tsushima.

Sadayuki, a fisherman since the age of 15, had just been caught by Jesus.

I first met Sadayuki when he asked me for a cigarette in a supermarket parking lot on Tsushima, an island of 30,000 people located halfway between Japan and South Korea. My wife and I were the only Seventh-day Adventists on the island when we arrived in 2012 to work as Global Mission pioneers, missionaries who enter areas previously unreached by the gospel.

Sadayuki tapped on my car window, startling my two young daughters and me as we waited for my wife to return with the groceries.

“Could you give me a cigarette?” he asked.

I immediately replied, “I’m sorry. I do not have any cigarettes.”

That is my standard response to such requests. But then I felt impressed to do something more. The stranger looked sad and hopeless. As he walked away, I told my daughters that we should pray for him. After the prayer, I thought about giving the man an Adventist tract. But I didn’t have any tracts left in the car after having passed them out two days earlier. So, I prayed again for God to do something.

When I opened my eyes, I saw a lone tract lying on the passenger side of the car’s floor. It was tattered after having been stomped on by my little daughter’s feet. But the words remained legible, and I had nothing else to share. So, I grabbed my two daughters’ hands, and we ran after the man. My daughters could barely keep up with me, and they ended up flying in the air behind me as I pulled them along.

Finally, we caught up with the man. Before I could speak, a Bible verse popped into my mind. It was the words of the apostle Peter, when he told a beggar, “Silver or gold I do not have, but what I do have I give you” (Acts 3:6, NKJV).

I told the man, “I am sorry, I do not have a cigarette to give you, but I do have this.”

I wondered whether the man would accept that tattered tract. He took it without hesitation and read it as I stood there. After he finished few minutes later, he thanked me profusely. “To tell you the truth,” he said, “I was just preparing to visit a church nearby to ask what hope is left in life. But you came to me before I could go there.”

When I heard this, I was shocked. I felt like our meeting had been divinely arranged. I invited the man to study the Bible with me every day and asked whether he needed something to eat. We could give him food every day, too. The man introduced himself as Kojima Sadayuki and happily agreed to come to my home for Bible studies.

Sadayuki showed up the next day, and we studied together for three months. I learned that Sadayuki had struggled with depression and alcoholism. He had tried to commit suicide twice by overdosing on pills, but doctors had saved his life miraculously both times. I told him that God would never allow him to die without first knowing Jesus’ love.

Sadayuki was baptized on Aug. 8, 2015 — becoming the second of three people who have accepted Jesus through baptism since my family moved to the island. He hasn’t drunk alcohol in more than two years. He dreams about opening an Alcoholics Anonymous program to help other people suffering from alcoholism on Tsushima.

Some days, my wife and I are tempted to feel discouraged about the great difficulties we face in sharing the gospel among a population that follows Buddhist and Shinto traditions. But Sadayuki’s story reminds us that God’s ways are not our ways and He can direct us to people who are seeking truth.

Kurihara Kimiyoshi is among more than 2,500 Global Mission pioneers, laypeople who volunteer at least a year to establish a congregation in an unentered area within their own culture. Since 1990, pioneers have established more than 11,000 new Seventh-day Adventist congregations. Read more here.

When a Japanese Pastor’s Son Tried to Convert His Girlfriend She emphatically told him, “I will never become a Christian!” But God had other plans.

Pornography vs. the Gospel My day as a young literature evangelist in Japan didn’t turn out as I expected.