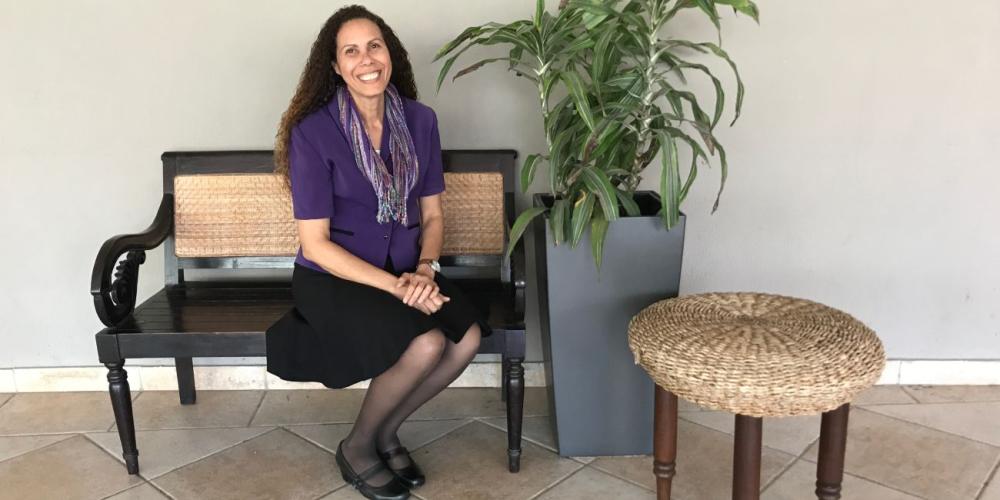 
A group of church members gathered in a Puerto Rican park at 5 a.m. Sabbath to pray, read the Bible, and eat a light breakfast.

Little did they expect to be watched by homeless people when they were ejected from their usual spot and met in the city’s central square instead.

The one-off move, however, changed their meetings permanently. Their monthly gathering has transformed into a weekly worship and breakfast for the homeless that culminated in a special communion service with grape juice, bread, and foot washing.

“We call it the Church Without Walls,” said Raquel Marrero Torres, a 52-year-old university math teacher, who organizes the meal.

The Church Without Wall is one of the ways that Seventh-day Adventists are seeking to share Jesus’ love in their communities in Puerto Rico, a U.S. territory measuring just 100 miles by 35 miles (160 kilometers by 55 kilometers) in the Caribbean Sea. Some churches organize weekly meals on their premises, and others send members to clean and repair homes during the week.

Raquel’s church group used to meet once a month in a park in Mayaguez, a city on Puerto Rico’s west coast that is home to Antillean Adventist University. But a city-organized event forced them to relocate to the city square for one Sabbath in 2012. As they ate, one church member noticed several homeless people in the square and invited them to join the meal.

“From that day on, he decided to return and feed the homeless by himself every Sabbath,” Raquel said.

The man, a small business owner in his early 50s, took hot cereal, sandwiches, fresh fruit, and juice to the central square every Sabbath for several months. Then he told Raquel, “I want you to go. I don’t want to just give them food. I also want them to hear about God.”

Raquel, an active leader in her congregation, agreed to accompany him the next Sabbath.

Early Sabbath morning, she opened the Bible and read to about 35 men and women.

Raquel went regularly after that, and she took over the task of organizing the meals in early 2017.

These days, 65 to 70 people show up at 7 a.m. every Sabbath to hear the Word of God and eat breakfast. The guests sit in chairs, set up by the volunteers, as they sing and listen to a pastor share a 20-minute message. The pastor recently led the group through the Discover Bible studies, and 40 people who completed the course were taken by chartered bus to a nearby Adventist church for a graduation ceremony.

Raquel expressed astonishment that most attendees arrive by 7 a.m., even though they knew that the breakfast will start only 45 minutes later.

“We started by giving food to the homeless, but now we have people who come because they want to hear God’s word,” she said. “They sit there and open their Bibles and sing. It’s amazing.”

The weekly gathering has become a family reunion.

“We laugh and cry,” Raquel said. “We have people who have passed away since we started the meetings, and we have wept for them. It is like a family.”

Many of the attendees have Raquel’s cellphone number and call her if they fall ill or have other needs during the week. Some attendees are no longer homeless after receiving apartments from the city. Church members helped them move into their new homes and to furnish them.

The program is funded by donations from church members and others. A student volunteer has a mother who works at a major international company, and the company donated backpacks filled with shampoo, soap, toothpaste, and towels to present to the female attendees on the Mother’s Day holiday and to the men on Father’s Day.

A few weeks ago, the volunteers organized a first communion service on the city square. Communion dishes and tables were brought from the church, and the pastor explained the ritual. Many people wept as they wash each other’s feet.

“To them, washing their feet was like God washing away their sins,” Raquel said. “It was the first time that they had had that experience. It was beautiful.”

Raquel is unaware of anyone being baptized because of the program, but she is confident that the Holy Spirit is working on people’s hearts.

Among the program’s volunteers are students from Antillean Adventist University, which will receive part of the Thirteenth Sabbath Offering in first quarter 2018. The funds will help open a center of influence and evangelism center at the university. Thank you for giving to the mission offering.

Doctors Said He Was Dying at 24. Now He’s 40 and Serves God in China Faith and a miracle transform the life of an aspiring math teacher.

June 3 - Breaking the Silence The first Adventist deaf pastor in Brazil puts on an play without sound. It tells the story of the Seventh-day Adventist pioneers and it brings the hard of hearing to tears. A story of passion, mission and hope!