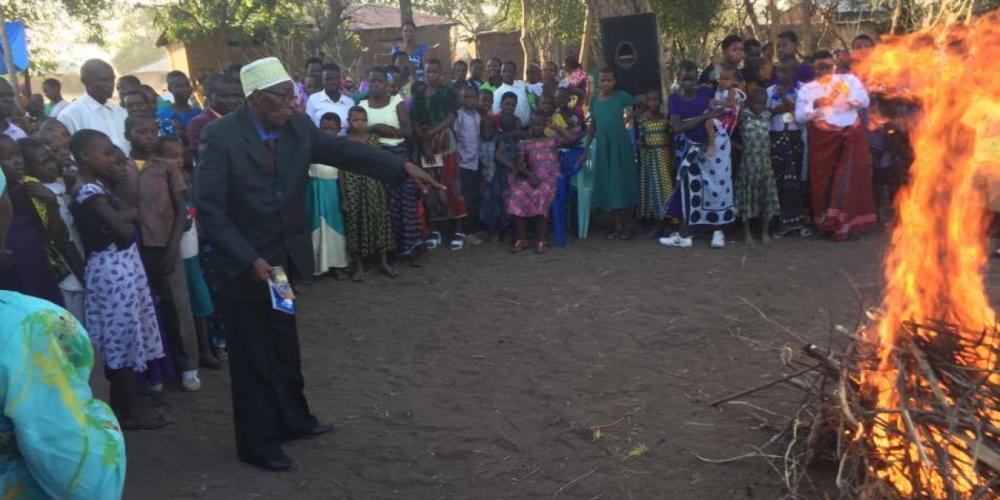 Joseph Maduhu is among 117,000 people baptized in TMI outreach in Tanzania

A prominent witchdoctor credited with having the power to kill by simply pointing his finger at someone is among the 117,000 people who were baptized during a major Total Membership Involvement evangelistic campaign in two East African countries.

The witchdoctor, Joseph Maduhu, took a public stand for Jesus through baptism and then took a second public stand by destroying his prized black stick and other charms in a bonfire in his home village in Tanzania, Seventh-day Adventist leaders said Thursday.

The remarkable conversion story illustrates the Holy Spirit-anointed power of Total Member Involvement (TMI), which is changing the lives of hundreds of thousands of people across the Adventist Church’s East-Central Africa Division, whose territory includes Tanzania, church leaders said.

TMI is an Adventist world church initiative that encourages each of the church’s 20 million members worldwide to actively share his or her hope in Jesus’ soon coming. It was the driving force behind mass baptisms in two other East African countries over the past year: 110,000 baptisms in Rwanda in May 2016 and 73,000 baptisms in Kenya in March 2017.

TMI evangelistic meetings at 8,000 sites across Tanzania and Uganda from June 16 to July 1 resulted in nearly 117,000 baptisms.

Read Tanzania and Uganda on Fire With 117,000 Baptisms

Joseph, the witchdoctor, was highly feared by many of the 7,000 villagers of Nguliguli when he started attending evangelistic meetings there last month, church leaders said. His spells also were known across Tanzania, in several other East African countries, and in Norway, where he had traveled to practice his craft. One villager told visiting Adventist pastors after Joseph’s baptism, “He had the power to make a person die just by pointing at him or her with his finger — and the person was gone.”

“Because of his demonic power and witchcrafts, no one dared to utter a word against him,” said Switta E. Stevens, executive secretary of the South Nyanza Conference, who preached in the village. “But the power of God visited and conquered the demonic power. It was during the TMI campaign that Joseph surrendered his life to Jesus through baptism.”

When Joseph decided to give his heart to Jesus, the pastors advised him to burn all his witchcraft paraphernalia in the front of the village. Joseph accepted under one condition.

“You can burn everything but not the black stick,” he said, according to Stevens.

Joseph claimed that his life was hidden in that black stick.

“We assured him that his life was now not hidden in the power of the devil but in the power of Jesus and that he wouldn’t be harmed if only he trusted the Savior,” Stevens said. “After a brief discussion, he accepted. All his witchcraft vessels and charms, including the black stick, were burned on July 1, 2017.”

A video of the event shows Joseph dancing with joy around the bonfire as church members sing praises to the Lord.

“To God be the glory!” Stevens said. “Joseph is now a set free man, enjoying the deliverance brought to him by Jesus.”

In all, 112 people were baptized in the village on July 1, said David Makoye, executive secretary of the Northern Tanzania Union Conference, who led the meetings.

In a sign of the power of TMI, Joseph wasted no time after his baptism in bringing a friend to Jesus, Makoye said.

“TMI changes lives because immediately after his baptism, he called another witchdoctor named Ng’wananyeye for baptism,” he said.

Joseph Maduhu celebrating the destruction of his witchcraft paraphernalia in Nguliguli, Tanzania, on July 1, 2017, as church members sing praises to God.

The Power of TMI

Among the other TMI activities in Tanzania, according to Coralie’s report:

Makoye marveled at TMI’s impact on Tanzania, where nearly 81,000 people were baptized.

“TMI has been a blessing to evangelism because it helps to change the lives of people who were in deep superstition,” he said.

He praised TMI for encouraging every member to use his or her talents effectively and said it was bringing a true revival among church members — including himself.

“It has brought a new experience to my life, and I have been working with this church for more than 30 years,” he said.

He said he has found TMI to win more souls and to be less expensive than previous approaches.

“It also tends to retain the newly converted members because of the strong relationship they have established,” he said. “TMI has more impact in the community than the traditional approach. I believe this is the way God wants us to finish His mission.”

“TMI is changing my union drastically, not only because of the number of souls who are joining the church but, more than anything else, because of the way our church members are getting involved in wholistic mission!” he said.

Germans Accidentally Try to Turn a Non-Christian Into an Adventist Pastor The mistake causes three generations in Germany to become faithful Adventists.