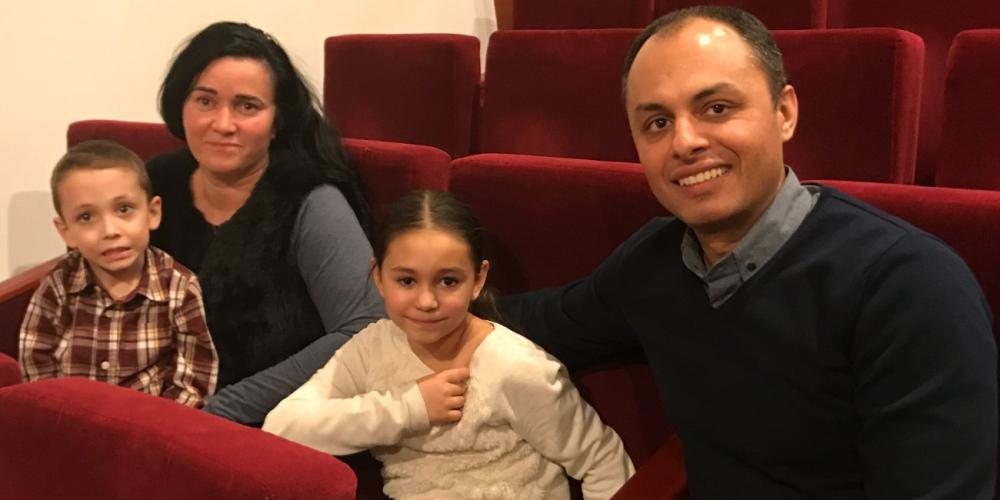 A Romanian speaks about his faith, cystic fibrosis, and a remarkable dream.

Editor’s note: In the My Mission column, we ask Seventh-day Adventists around the world how they pray, read the Bible, and witness — the three ingredients to a dynamic Christian life.

Valentin Manea balked when his cousin asked him by telephone to switch the television channel to a Seventh-day Adventist evangelistic series.

Valentin was watching soccer in his apartment in Romania’s capital, Bucharest.

“I was a big soccer fan,” Valentin said in an interview. “I cried during matches. I waved my arms and pumped my fists. I told my cousin, ‘There’s no way that I’m going to watch this program because of the soccer match.’”

But during halftime, Valentin flipped through the channels to see what else was on. He stopped at an image of a bleeding lamb and Jesus hanging on the cross. A man was saying, “Behold the Lamb of God who takes away the sins of the world.”

“I didn’t understand what I was seeing, but I knew it was about Christ,” Valentin said. “A peace filled me, and I felt very good. I couldn’t change the channel.”

Valentin watched until the end of the program. Then he called his cousin to ask how he could watch another presentation. His cousin, an Adventist, gave him the schedule for the evangelistic series.

Valentin watched every evening. The thrill of learning about Jesus surpassed anything that he had experienced during soccer games.

“I felt great every time that I watched,” he said. “It was amazing.”

After the two weeks of meetings concluded, however, Valentin forgot about Jesus. He returned to his life as a 25-year-old accounting student.

Several weeks passed. A presenter’s remarks at a business conference caused Valentin to start worrying about the meaning of the mark of the beast in the book of Revelation. He anxiously called his cousin to ask what she thought. She offered Bible study materials on the books of Daniel and Revelation.

During this time, he had a dream that convinced him that the Seventh-day Adventist Church was God’s true church.

In the dream, he saw a white horse and a black horse, much like the horses that he was studying in Revelation 6. He also saw a man.

Valentin asked the man about the meaning of the horses.

“The white horse represents the church of God,” the man replied.

“What about the black horse?” Valentin asked.

Valentin then saw Jesus returning in the sky to take the redeemed to heaven.

Valentin cried out, “I want to go to Christ in heaven!”

But the man said, “You are not ready.”

Valentin awoke abruptly. He knew what he had to do.

Three days later, he called his cousin. “I want to go to your church,” he said.

Valentin studied the Bible with an Adventist pastor for the next year and married his common-law wife, Antoinette. After that, he was baptized.

“It was not a spur-of-the-moment decision,” he said. “I studied for several months and made the decision with all my heart and all my mind.”

Valentin, now 39, serves as an elder at Bucharest’s Cuza Voda Seventh-day Adventist Church, the church recommended by his cousin 15 years earlier. Described by the church’s pastor as a model Christian and faithful witness, Valentin has brought his wife, his mother, his sister, and others into the Adventist Church.

He sat down with Adventist Mission to discuss how he prays, reads the Bible, and shares Jesus with others.

A: When I wake up in the morning, the first thing I do is pray. Then I go to the bathroom and, after that, I read the Bible. I read the day’s chapter from the Adventist Church’s Bible reading plan, Believe His Prophets. I also read a chapter from an Ellen G. White book. Currently I am reading “Prophets and Kings.” The morning prayer time and reading last about 30 minutes.

After breakfast, I pray during the 40-minute commute from my village home to my workplace in Bucharest. I ask the Holy Spirit to remind me about what I read that morning as well as the previous evening.

When I pray, I also listen. I often open the Bible to hear God’s reply.

Seven years ago, my wife and I still lived in Bucharest and were thinking about moving to the countryside. It was a difficult decision to make, and we sought assurance that this was God’s will.

One day after praying, I opened the Bible and read Deuteronomy 30:16, which says, “I command you today to love the Lord your God, to walk in His ways, and to keep His commandments, His statutes, and His judgments, that you may live and multiply; and the Lord your God will bless you in the land which you go to possess” (NKJV).

It seemed to me that God would prefer that His children lived in the country than in the big city, and this verse assured me that we were making the right decision.

We had struggled to find a buyer for our city apartment. But after this prayer, someone agreed to pay our full asking price. We moved to the village two weeks later.

Perhaps my most difficult prayer came after my son’s birth five years ago. My son, Albert, and my wife remained in the hospital for three months. The doctors finally diagnosed Albert with cystic fibrosis.

Upon hearing the news, my wife became deeply depressed and wept all the time. I was extremely worried about her. One day I prayed and wept for three hours. My prayer started in the hospital room, continued in the car, and ended sometime after I reached home. I could not find the words to give thanks to God. I pleaded with all my heart that God would preserve my wife’s health.

I cannot say that my soul was filled with peace after those three hours. But when I went to see my wife the next morning, she greeted me with a smile and said God had given her peace. Then I realized that God had answered my prayer.

Q: How do you read the Bible?

In addition to reading a chapter from the Bible every morning, I read two chapters at night. The Bible chapters are based on a theme. I have a Bible study about righteousness by faith, and I am taking two verses from this Bible study every night. I read the entire chapter where each Bible verse is found to understand them in their full context.

Every night, I also read the day’s Sabbath School lesson and one or two chapters from Ellen White’s writings. I recently finished “The Desire of Ages,” and now I am reading “Mind, Character, and Personality.”

If I have any free moments during the day, I read from “Mind, Character, and Personality” on my cellphone. I share interesting passages with a Facebook group of my friends. Today I shared three passages: at 9 a.m., 10:46 a.m., and at 4:23 p.m., while I was waiting for this interview.

I usually spend two to 2 ½ hours a day reading the Bible and Ellen White’s writings.

We also have family worship every evening. We sing, my 8-year-old daughter reads from the Bible, and we pray. After my son and daughter go to bed, I read on my own.

Q: How do you witness?

In the past, I shared many books with strangers. It’s easy: You give someone a book and tell them about Jesus.

But I am increasingly convinced that I need to make more efforts to share my faith with family, friends, and coworkers. This takes time. It takes prayer. The Holy Spirit works on hearts as people observe us and our lifestyle.

My mother was baptized a year after me. That wasn’t too difficult. She was raised in an Adventist home, but she struggled giving up religious icons. She adored icons and worshipped them. But when she saw that I had given up my old ways, she said, “If you can do it, so can I.”

My wife was more difficult. She was indifferent. She said, “OK, the Sabbath is the Lord’s day. We won’t eat pork. But I’m not going to church. I don’t want to accept Jesus.”

I prayed for wife. Church members met every day from 6 a.m. to 8 a.m. to pray for loved ones, and I joined them at the church. For six months, I prayed for my wife.

On my birthday, my wife came to me with a smile.

“I have a special gift for you,” she said. “Your present for your birthday is that I want to go to church and I want to take baptismal classes.”

I hugged and kissed my wife.

“I love you very, very, very much,” I told her. “This is the most incredible gift ever!”

Nikolai Zhukalyuk, 84, former president of the Adventist Church in Ukraine

Inspired by Romania, Church Leaders to Take TMI Evangelism Across Europe “This will be the beginning of something bigger,” says Mario Brito, president of the Inter-European Division.