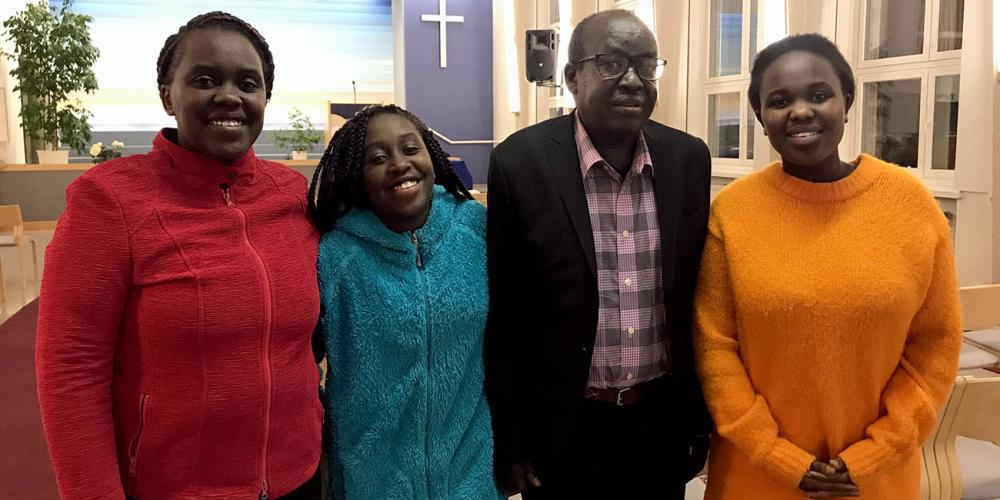 Born in Kenya, Reborn in Finland

Bilha Tuitoek was 10 years old when she received the news.

She got the telephone call from Mother while living at a boarding school in Kenya.

“I have a big announcement,” Mother said. “I am moving to Finland to study nursing.”

Bilha couldn’t believe that Mother would leave her with Father, her sister, and her two brothers in Africa to travel to Europe. She wasn’t even sure where Finland was located on the map.

“I’m going because I want you to have a better life,” Mother said. “I will send for you as soon as I can.”

The wait proved to be longer than anyone had expected. Five years passed. During that time, Mother called often on WhatsApp. She told how she was learning the Finnish language. She spoke about her nursing classes. She said she was reading the Bible for the first time and was convinced that the seventh day, Saturday, was the Sabbath, not the first day, Sunday.

Bilha and the rest of the family were surprised to hear Mother’s words. They always had gone to church on Sunday in their hometown of Eldoret. But they hadn’t actually read the Bible. Mother showed Bible verses about the Sabbath, and they saw that she was right.

One day, Mother called to say that she had found a church in Tempere, near to where she was studying. It was a Seventh-day Adventist church and worshipped on Saturdays, just as she had read in the Bible.

“Before I left Kenya, I prayed, ‘Take me to where people read Your Word and where I will grow,” Mother said. “My eyes have been opened in Finland.”

Mother, meanwhile, kept asking the Finnish government for permission for her family to join her in Finland. Church members joined her in praying. Finally after five years, the government issued visas for the family. Bilha was so excited! She screamed into the phone when Mother broke the news. She had seen rich classmates go on family vacations to Dubai, but she had never left Kenya. She thought only millionaires could travel, and Mother was a nurse, and Father was a postman. But now she was going to live in Finland!

After the excitement of the move settled, Bilha discovered that life wasn’t the same in Finland as in Kenya. First of all, the family arrived in January, and the ground was covered with white, cold snow. She had never seen snow before.

In Kenya, children politely address their teachers as “mister” and “missus.” In Finland, children call teachers by their first names. When Bilha tried to call her teacher “missus,” she replied, “Please, don’t call me that. It makes me feel very old.”

A year after she arrived in Finland, something terrible happened.

Father started having trouble breathing, and he went to a clinic for help. The doctor assured him that it was the flu and would go away. But the problem grew worse.

Finally, Mother took Father to the hospital emergency room, where he collapsed. He stopped breathing, and doctors had to resuscitate him three times. The third time, he stopped breathing for 55 minutes. Doctors were sure that his brain had been damaged permanently and whispered that he had no hope. They hooked him up to machines that helped him to breathe again, but he was in a coma.

Later, doctors found that Father had contracted a virus that had caused his lungs to collapse.

On Sabbath, Mother wept as she told her story in church. Church members wept with her and prayed for Father. Bilha also cried.

“Our God is able,” the pastor said. “Let’s leave everything to God.”

That afternoon, a doctor called Mother. She feared the worse when she saw the incoming call on her cell phone. Instead, however, the doctor announced that Father was coming out of his coma.

By the time she got to the hospital, he was back in the coma. But the doctor had good news. Father’s brain had not suffered any damage.

While Father was in the coma, Bilha prayed nonstop.

Jeremiah 32:27 became her favorite Bible promise. It says, “Behold, I am the Lord, the God of all flesh. Is there anything too hard for Me?”

She prayed, “God, You are the God who said this. Restoring my father’s health is not too hard for You.”

One Sabbath afternoon, she was at home with her siblings when Mother called from the hospital.

All four children screamed with joy and ran outside. It was winter, but they didn’t even bother to take hats and scarves. A friend drove them to the hospital.

Six months later, Father was released from the hospital.

He immediately gave his heart to Jesus and was baptized. Bilha and her sister and brothers were baptized on the same Sabbath.

Since then, many people have visited the Adventist church to see Father and to hear his story. Mother tells the story to strangers in supermarkets and on the street. No one turns away from the energetic black woman as she joyfully proclaims God’s power in the Finnish language.

The experience has changed Bilha’s life. She used to only pray when she wanted help with homework or exams. Now she rarely asks God for anything but instead thanks Him for the things that He has provided and will provide.

Bilha is now 17 and plans to become a physician. She is certain that God brought Mother and the family to Finland to save Father’s life.

“We know if Dad had been in Kenya, he wouldn’t have survived his illness,” she said.

She also is always smiling because she believes God saved the family in another way — by leading them to Him in Finland.

Bilha Tuitoek telling how her relationship with God has changed. The second part of the video shows Belha giving her personal testimony in the Tempere church. (Andrew McChesney / Adventist Mission)

No Schooling, but He Could Read Bible Joe prayed earnestly. He didn’t know how he would remember all the verses.

The Church on Fire The land where Jesus walked 2,000 years ago, youth set the church on fire in Tokyo, Japan, and a Life Hope Center opens in Nazareth, Israel.