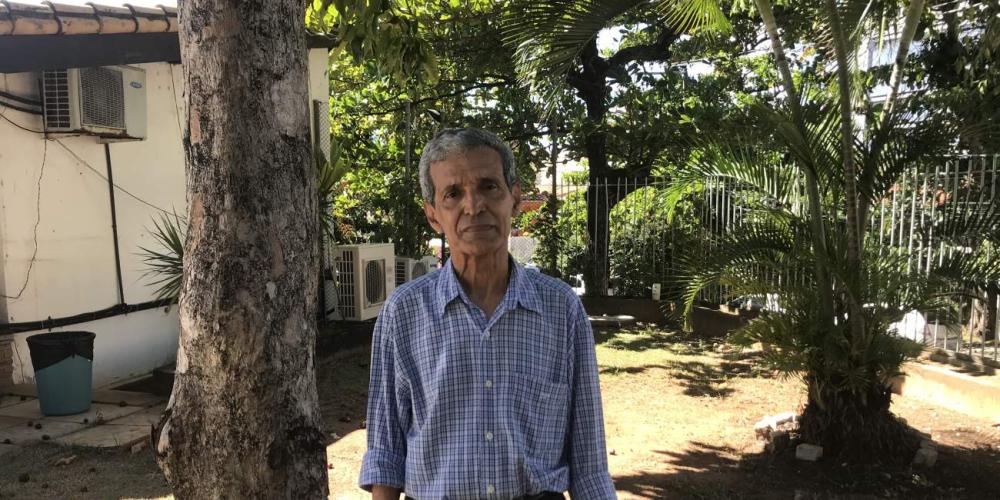 Banker Asks God to Reveal Bible and His Church

Brazilian says God answered the prayer more quickly than any other prayer in his life.

Gilberto Deusdedite Ferreira da Silva had no interest in joining a church, and he couldn’t understand why he suddenly was overcome with a desire to read the Bible.

Unable to resist the urge, the retired Brazilian bank manager began to study the Bible on his own.

Gilberto was amazed by what he read. But parts of the Bible confused him, and he anxiously pondered their meaning. He wished that someone would explain the Bible to him.

On New Year’s Eve, he decided to skip the family tradition of going to a party and watching fireworks from the street in Salvador, a coastal city of 4 million people in Brazil.

“Watch the fireworks without me,” he told his wife and three teenage children. “I won’t go with you this time.”

Gilberto had a plan. He wanted to pray.

After his family left the house, he pleaded with God to teach him the Bible and to reveal His true church.

“God answered that prayer more quickly than any other prayer in my life,” Gilberto said later.

Without knowing it, Gilberto had prayed on the seventh-day Sabbath. Dec. 31 fell on a Saturday that year. The next day, Jan. 1, was a Sunday.

On Monday, the first workday of the year, Gilberto received a phone call from the bank where he used to work. The bank director wanted him to come in to sign a contract on some investments that he owned.

At the bank, Gilberto saw a former co-worker sitting near the bank director’s desk and abruptly remembered that the man was a Christian. He went over to the man, Alvaro, after signing the contract.

“Alvaro, do you know where I can study the Bible?” Gilberto asked. “Don’t introduce me to a pastor. Don’t try to convert me. I just want to study the Bible.”

Alvaro was a Seventh-day Adventist, but Gilberto didn’t know that.

“You can study the Bible in Cabula,” Alvaro said, referring to the city district where his Adventist church is located.

“That’s so far away,” Gilberto said. “The traffic is terrible.”

“I know just the place,” Alvaro said. “People just study the Bible there. It’s not a church.”

The next day, on Tuesday, Alvaro took Gilberto to the Sharing Jesus house-church, where people meet in small groups to sing and study the Bible. Gilberto, however, felt uncomfortable showing up at a place where he didn’t know anyone, so he asked a family friend, Regina, to come along. His wife refused to go.

Gilberto was fascinated by the Bible study and asked Regina to join him at the next meeting.

Regina accompanied Gilberto to every meeting, and she often wore a swimsuit under her clothing so she could swim at the beach afterward.

“Guess who was baptized with me,” Gilberto said with a twinkle in his eye. “My mother.”

Before his baptism, he announced the news to his mother, who had lived for years in the Brazilian countryside with his sister, Odete, an Adventist.

“Mom, I’m going to be baptized into my sister’s church,” he said.

“Why can’t we be baptized together?” she said.

“Are you prepared for baptism?” Gilberto asked.

“Every day, my daughter gives me Bible lessons,” she said. “I can’t lose this opportunity to go into the water with you.”

Today, Gilberto is 68 and a co-leader of the house-church, which has baptized about 200 people in 14 years. Part of the Thirteenth Sabbath Offering in second quarter 2019 will help the house-church move out of rented premises into a larger building, where it will also offer healthy cooking classes and health seminars.

Gilberto said he marvels at how God answered his New Year’s prayer to understand the Bible and know God’s true church by leading him to the Adventist house-church in just three days.

“How did I come to this church?” he said in an interview at the house-church. “It was the love of God. But what prompted me to stay was the welcoming and loving environment that I found.”

He added: “I think this church has broken the prejudices of many people. I came from the world, and we have baptized people just like me — physicians, dentists, and lawyers — people who normally wouldn’t go to church. We welcome people who don’t want to go to church and, once they are baptized, they almost never leave the church.”

Thank you for your mission offerings.

Italian’s Path From Sicilian Village to Presidential Palace Suddenly, he heard a whisper in his ear. “Look into your shirt pocket,” it said.

​Seventh-day Adventist Dog The dog refuses to hunt on Sabbath and will not eat pork.